Sydney FC’s dream of a perfect season will only have strengthened after they made it five wins from five matches, disposing of struggling W-League champions Melbourne City in a behind-closed-doors fixture at AAMI Park.

Sydney striker Remy Siemsen was the one who made the difference, scoring the opening goal of the game five minutes into the second half. Natalie Tobin then made sure of the points when she headed home Teresa Polias’s corner with 15 minutes remaining, making it 2-0.

It is a result that is another hammer blow to City’s ambitions of even playing finals football, let alone defending a title they won by beating Sydney 1-0 in last season’s grand final. 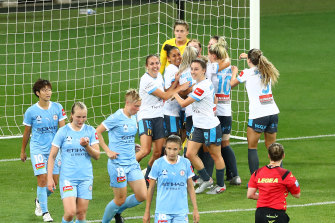 Sydney FC celebrate going 2-0 up after a Natalie Tobin goal against Melbourne City at AAMI Park on Thursday night.Credit:Getty Images

Much water has passed under the bridge since that game in March 2020: almost all of City’s squad that day have left, most playing in Europe, and coach Rado Vidosic has had his work cut out just trying to integrate a host of new players into a competitive unit.

Sydney is now top of the table with 15 points from five games, while City languishes in seventh place with four points from eight games, five points behind fourth-placed Adelaide United, who have two games in hand.

This match was supposed to be played at Dandenong City’s ground in Melbourne’s south-east, the first tentative steps City were due to take in a region of the metropolis they soon hope to call home.

Unfortunately, the playing surface was deemed not to be up to scratch so the game was shifted at 24 hours’ notice to the city-centre venue; and the rapidity of the turnaround meant there was no time to put in place COVID-safe protocols for the crowd, hence the lack of an audience.

It was a game that began at high tempo and featured plenty of endeavour, commitment and enthusiasm through the first half.

Sadly, neither team found much in the way of penetration as they struggled to create many real chances in an opening 45 minutes that featured plenty of running, chasing, closing down and tackling but few moments of inspiration. 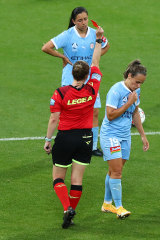 Games turn on moments, of course, and it is intriguing to think how this contest might have played out had Alex Chidiac taken advantage of the most inspirational moves of the match in the sixth minute.

City drove forward down the flank and Harriet Withers found Chidiac with a cross from the right.

Matildas attacker Chidiac swivelled beautifully to take control and create the space for a shot.

It looked as though she must surely break the deadlock, but that was reckoning without Jada Whyman, the Sydney goalkeeper, who came out, stood tall and blocked Chidiac’s close-range shot with her hand.

City had a gilt-edged chance to get their noses in front just after the restart but Chinatsu Kira fired over the bar.

She and her teammates were made to rue that profligacy soon after when Sydney hit the front through leading scorer Siemsen.

Cortnee Vine outmuscled City skipper Emma Checker on the edge of the area and slid a pass through for Siemsen to beat Micah’s dive.

Things went from bad to worse for Vidosic’s team minutes later when they were reduced to 10 players after the dismissal of Tyla-Jay Vlajnic, shown a straight red card for bringing down Vine as she bored in on goal.

Sydney eased any nerves they may have had with Tobin’s header, scored against nine fit players as Jenna McCormick was off the pitch receiving treatment when Polias drove her corner in from the right.