Brentford striker Ivan Toney has been named the Sky Bet Championship Player of the Month for October.

Any doubts about his ability to replicate League One form in the Championship were dispelled in a blistering spell of eight goals in six games, showcasing his positioning and poaching instincts, bravery in the air and underrated link-up play.

Brentford manager Thomas Frank said: “Ivan is growing and his goals are of course the talking point, but for me goals are one thing.

“They are hugely important and it’s massive that he has already got into double figures. However, in terms of his link-up play and his workrate and the pressure, he is getting better and better on that and getting fitter and fitter so I’m really pleased with him for that as well.”

Toney said: “It is my job to score goals. I’ve come to a club where the striker gets a lot of chances.

“I am thankful to the players around me because they are putting it on a plate for me and it is just my job to finish those chances.”

Middlesbrough manager Neil Warnock has been named the Sky Bet Championship Manager of the Month for October. 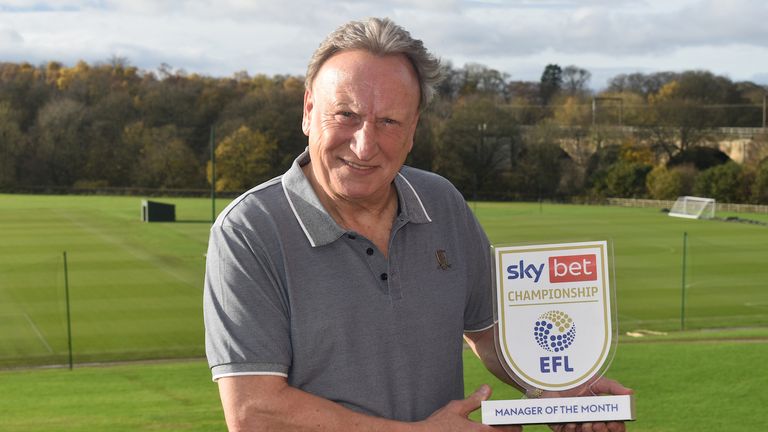 Not content with ten Manager of the Month awards already during his storied career, Warnock picks up another after guiding Boro through an unbeaten month with 14 points from six unbeaten games and into the Play-Off places.

Warnock said: “It’s been such a difficult time up in the north east, so it’s nice to be a bit of good news put a few smiles on faces. It’s a talking point for the fans, and the sooner we can get them back into stadiums the better.

“We’ve played some cracking football, and there’s great camaraderie in the squad. I can’t stress it enough how much I’ve enjoyed working with them. Everybody in the dressing room wants to listen, and the way some of them have improved, that’s what I enjoy most in management.” 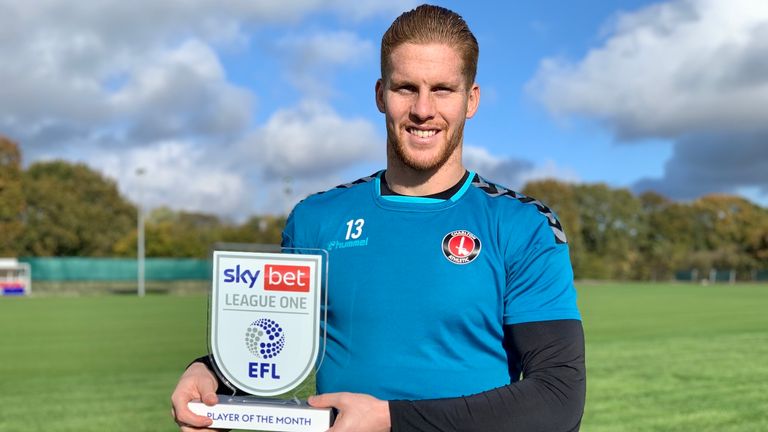 Charlton Athletic goalkeeper Ben Amos has been named the Sky Bet League One Player of the Month for October.

Finally given an opportunity to shine at The Valley, Amos has done exactly that, not conceding a goal in six October games and making crucial stops in every match, including breathtaking reaction saves against Sunderland and Northampton.

Amos said: “Keeping all those clean sheets was a great achievement, but you can’t do it on your own.

“You need everyone from the front players to the boys at the back doing their bit so it’s testament to them, and it seems a little bit daft that one player gets it when there’s been all that effort from everyone to get those clean sheets.

“It’s great from a personal point of view to have hit the ground running this season, but the most important thing is the team doing well and we want to get promoted this season – and I think we’ve got the capability to do it. As long as I feel I’m doing my best and the team is achieving its goal, I’m happy.” 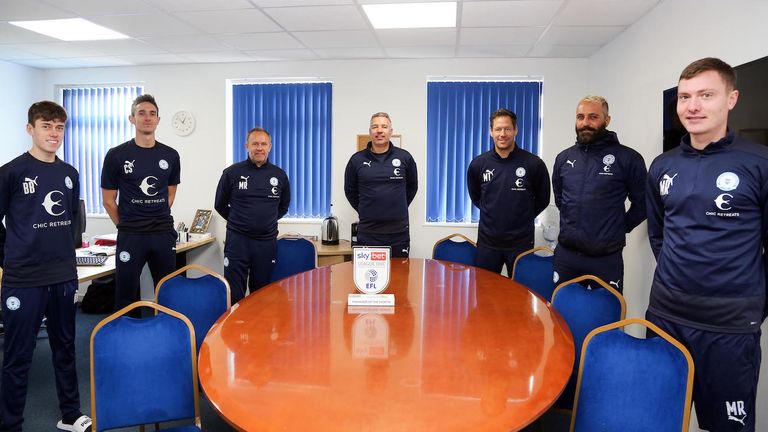 Peterborough United manager Darren Ferguson has been named the Sky Bet League One Manager of the Month for October.

Goals galore as Posh returned to their favourite style under Ferguson, displaying their attacking prowess, collecting 19 points from seven unbeaten games, moving into the Play-Off places and hitting the net 17 times in the thrill-a-minute process.

Ferguson said: “The players were outstanding during the month of October, to win the amount of games that we did against the calibre of opponent that we did is excellent.

“The mentality of the players was superb. The players were disappointed that we didn’t take all three points against Burton Albion, but in that game we had plenty of opportunities to score. The players are in a good place at the minute and long may that continue.” 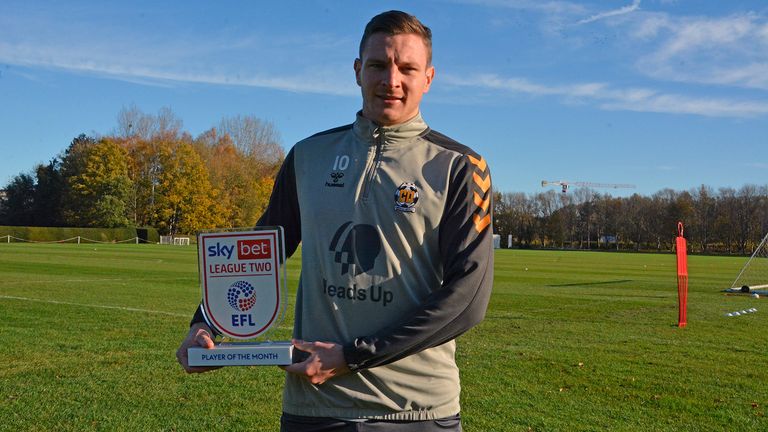 Cambridge United striker Paul Mullin has been named the Sky Bet League Two Player of the Month for October.

After a second straight nomination for the hard-working forward, he picks up the first EFL Player of the Month award of his career. He scored eight in seven October games alone, even pirouetting for the third goal of his hat-trick against Port Vale.

Mullin said: “I’m made up to win the award, but it’s more a reflection of the team as a whole. It’s the players around me who have created me the chances, and I’m very grateful that I’ve been able to put them away through October.

“I scored four goals in September but that wasn’t enough to win that month’s award, so I thought I’d double it in October! I’m obviously really pleased to have continued the strong start to the season, and to come back and win the award in the following month after being nominated in September is a good thing, but more importantly we’ve been picking up the points.” 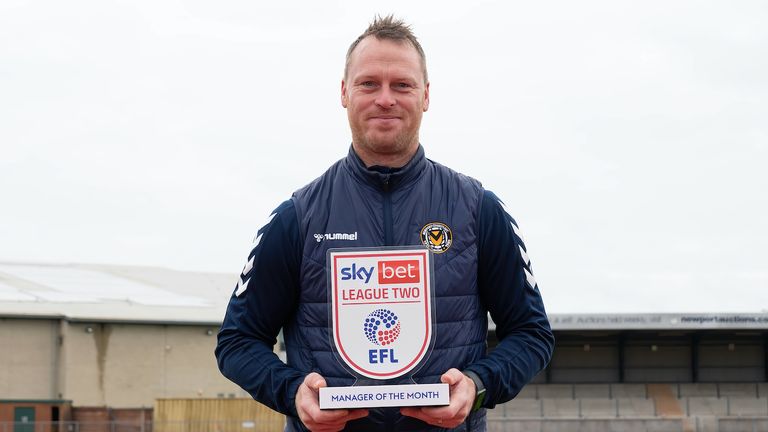 Newport County manager Michael Flynn has been named the Sky Bet League Two Manager of the Month for October.

The spirit Flynn has engendered in his Newport team continues to amaze and lead to remarkable feats. Three of their six victories in October, which lifted them top of League Two, were secured by winning goals from the 88th minute onwards.

Flynn said: “It’s a reward for all of the players and the staff because I couldn’t do it all on my own. It’s a good appreciation and shows the togetherness that we’ve got.

“Every win is just as important because you can only get three points but, looking at it over the month, you would have to say that the 3-0 win against Bradford City was the most convincing in October. I thought we were very, very good against a good team at a tough place to go. That was very pleasing.

“We’ve installed belief into the players and our philosophy is keep going until the end. We never know when we’re beaten, but I think the way that we’re playing has been fantastic. We’re creating a lot of goalscoring opportunities and dominating possession now, which is very pleasing to say because we’re doing it our way. We’re playing attractive possession-based football and it’s given our just rewards. The players that have come in have adapted to that really well, and the players that were already here have taken it on board.