A feud has erupted between Brisbane Roar and the A-League players’ union over an attempt to sack defender Corey Brown over alleged drug use – one of a number of serious legal battles the club is fighting that could force action against their Indonesian owner.

Brown, a long-time club stalwart who has never failed a drug test, is fighting against the termination of his three-year contract and denies all allegations made against him by the Roar, who are also under investigation for an alleged JobKeeper rort and are at risk of being thrown out of Queensland’s NPL competitions due to unpaid debts with the state governing body. 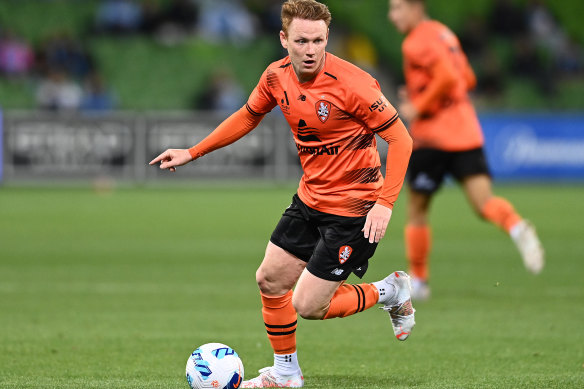 Corey Brown looks to pass the ball during a match against Melbourne City last season.Credit:Getty

Brisbane Roar moved to sever ties with the 28-year-old left-back last month, but despite still waiting for a verdict on the matter being returned by Football Australia’s national dispute resolution chamber, the club went public late on Thursday night with a 25-word statement announcing Brown’s exit, while providing no reason for it.

That has brought the issue, which has been bubbling away in the background for months, into the public light, prompting a scathing response from Professional Footballers Australia to their “misleading and bizarre statement” and general lack of professionalism.

“As a consequence of this legal action, Corey’s contract remains on foot until a final determination is made. This is something the club, deliberately or otherwise, is failing to understand. 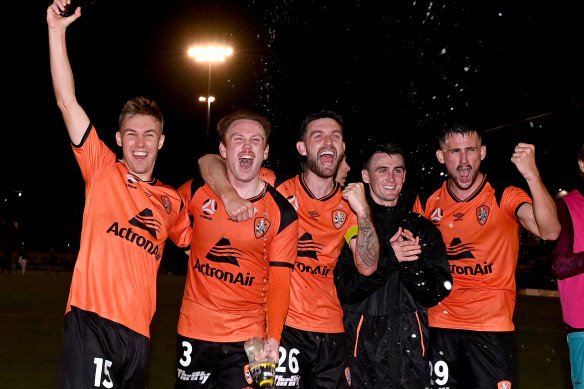 Corey Brown (second from left) celebrates a win over Perth Glory with teammates.Credit:Getty

“As the club continues to operate well below the expected standards of a professional football club, the PFA’s primary focus remains on protecting Corey’s wellbeing – something the club seems to have little regard for.”

The Roar has since released a second statement, rejecting the PFA’s statement, confirming Brown was terminated for serious misconduct, and inviting Busch to “disclose his involvement in this investigation and subsequent termination process and to publicly state the PFA position on the issues that gave the Club no option but to terminate [Brown’s] contract for Serious Misconduct.”

Football Australia confirmed Brown had submitted an application to its dispute resolution chamber and said: “All players and clubs who are parties to an A-Leagues player contract are obliged to submit exclusively to the jurisdiction of the NDRC.”

Brown did not take part in Brisbane’s recent friendlies against English Premier League sides Leeds United and Aston Villa due to a club-imposed suspension, after the Roar made allegations against him in April regarding recreational drug use during the off-season, nor has he featured in the Australia Cup, where the club has reached the quarter-finals after a penalty shootout win over Avondale FC on Wednesday. Since April, he has been blocked from training with the team and has been forced to train alone at his own cost, despite cooperating with an investigation into his alleged conduct.

The Herald and The Age has seen correspondence between legal representatives of Brown and the Roar, where the player’s lawyer rejects the allegations made by the club, which are described as “generalised and opaque”, and demands for the club to provide Brown with conclusive proof of wrongdoing, which the lawyer says has not been provided.

The club also has not paid Brown his salary for this month, despite his contract being on foot while the appeal process continues. Ben Ihle, QC, who represented Essendon AFL players during their supplements scandal case with ASADA and oversaw the inquiry into Victoria’s hotel quarantine program, is the independent arbiter of Brown’s case with the FA’s disputes chamber, and is expected to hand down a decision imminently.

The situation has taken a significant toll on Brown, who was flagged by the club’s doctor as experiencing mental health distress, and has been provided with care and support by the PFA. Current and former Roar players are furious at the way Brown has been treated, and a recent PFA survey has found only 34 per cent of the men’s squad last season would recommend the club to other players – the lowest figure since the union began its annual club benchmarking reports.

Meanwhile, the Fair Work Ombudsman has confirmed it is investigating the Roar after receiving complaints that players from the club’s youth team were being underpaid. Sources say the Roar’s youth team, who are on amateur contracts, were asked to sacrifice $500 per week during the first COVID shutdown in 2020 to pay for medical and fitness services. When players were then placed on the JobKeeper wage subsidy program, money received from the government was withheld by the club.

“As this matter is ongoing, it is not appropriate to comment further at this time,” said an FWO spokesperson.

Football Queensland is also threatening to kick out the Roar’s academy teams from the NPL system unless it repays an unpaid debt of over $100,000, which other sources say has been outstanding for several years. The Roar’s licence to play in the NPL expires at the end of the year and won’t be renewed unless that debt is paid, according to sources. FQ was contacted for comment.

These are just the latest legal issues to have arisen at the Roar under the ownership of Indonesian conglomerate the Bakrie Group, which has bankrolled the club since 2011 and has long been criticised by fans for their meagre spending on football and off-field disorganisation. Football Australia has the power to heavily sanction the club for any breaches of their club licensing agreement, which may end up forcing the Australian Professional Leagues – which already runs the ownerless Newcastle Jets – to step in and take over the club.

The Roar has lived a nomadic existence after falling out with two landlords of their previous training facilities, the Queensland Rugby Union and Logan City Council, over unpaid rent and utilities bills.

Last year, former Socceroo Brett Holman had to force the club to cough up over $400,000 in withheld insurance money after suffering a career-ending injury while playing for the Roar against Perth Glory in 2018.

Ex-coach Robbie Fowler also took the club to FIFA and won a six-figure payout for unfair dismissal when he and then-assistant Tony Grant were sacked in mid-2020.

In 2015, midfielder Luke Brattan was able to have his contract with the club terminated due to over a year’s worth of unpaid superannuation in a decision reached by FA’s independent arbitrator.

Queensland has recently overtaken Victoria as the state with the second-biggest number of grassroots participants, behind only NSW – underlining the strategic importance for football that the region is positively represented at the professional level.

It has been a steady fall from grace over the past decade for the Roar, who once set a new benchmark for Australian club soccer with a mesmerising 36-game unbeaten streak – a national sporting record – under former coach Ange Postecoglou in 2011-12.