Report and highlights from the Sky Bet Championship clash between Bristol City and Nottingham Forest at Ashton Gate as the Robins ended their nightmare run of home defeats with a goalless draw on Saturday.

Both sides hit the post, Alex Mighten for Forest on 27 minutes and Henri Lansbury 15 minutes later for City.

Former City player Luke Freeman almost won it for Forest as a substitute in stoppage time with a fierce volley that flew inches over.

But in the end both sides had to settle for a point from a game of few clear chances. 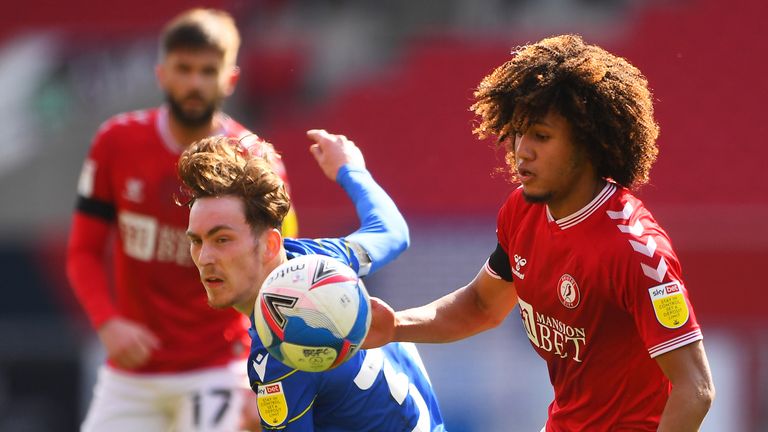 Nigel Pearson made four changes from the City team beaten at Coventry in their previous game, while Forest boss Chris Hughton brought in Anthony Knockaert for the injured Sammy Ameobi.

The match saw Bhupinder and Sunny Gill become the first South Asian brothers to officiate at a Football League game, Bhupinder as an assistant referee and Sunny as fourth official.

Before kick-off an impeccably observed two-minutes silence was held to honour the passing of the Duke of Edinburgh.

Forest began impressively against a City side bereft of confidence and Knockaert sent a 25-yard drive wide on eight minutes.

Joe Worrall headed straight at Dan Bentley from a Knockaert free kick before Mighten rattled a post with a low drive after a swift Forest break.

There was nothing to trouble visiting goalkeeper Brice Samba in the opening half hour. But on 32 minutes Kasey Palmer had City’s first shot, which took a deflection before clearing the crossbar.

Mighten had a shot blocked. But City almost grabbed a 42nd minute lead against the run of play when Lansbury curled a right-footed shot against a post after a free kick was touched to him just outside the box.

The free kick was won by Han-Noah Massengo, who was a bundle of energy in midfield as City improved without creating any first half chances from open play.

Forest also began the second half well, James Garner narrowly off-target with a well struck shot from 25 yards, before Massengo produced a similar effort for the home side.

City were quicker to the ball than in the first period and it was a much closer contest. They had a loud shout for a penalty rejected when Semenyo went down inside the area on 75 minutes.

Both managers made changes up front, with Pearson introducing Famara Diedhiou and Tommy Conway for Nahki Wells and Sam Pearson, and Hughton sending on Lyle Taylor for Lewis Grabban.

Cyrus Christie forced a save from Bentley and Taylor fired over as Forest came again. But City fought tigerishly to end that record losing home streak.