Home » Soccer » Bulls out the gate: Macarthur make fast start to life in A-League off back of Milligan

Macarthur FC have drawn first blood in the A-League's newest derby after a second-half cameo from star Spanish recruit Benat Etxebarria steered them to a memorable 1-0 victory over the Western Sydney Wanderers.

The Bulls and Wanderers traded blows for more than 70 engrossing minutes on Wednesday night before the deadlock was broken by a deflected free kick from Benat, the former Athletic Bilbao midfielder and one of the most well-credentialed foreigners the domestic game has seen. 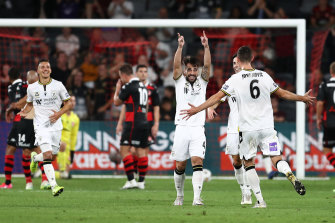 Benat Extebarria celebrates the winning goal from his deflected free kick at Bankwest Stadium on Wednesday.Credit:Getty

Standing over a free kick outside the penalty area won by highly rated youngster Jake Hollman, Benat drilled the ball at goal and a wicked ricochet off Mark Milligan saw it home in the 72nd minute.

It sparked wild celebrations from the few dozen Macarthur supporters who sat in the expansion team's designated away bay among 10,128 fans at Bankwest Stadium. They were hard to spot but impossible to ignore thanks to the distinct, metallic rattle of cowbells that were included with the club's inaugural membership packages, and will become a fixture of Australian soccer's sonic landscape.

Benat was introduced off the bench in the 68th minute and nearly scored with his first touch, but his long-distance shot on goal was batted away by Wanderers custodian Daniel Margush.

Fringe Socceroos goalkeeper Adam Federici was busy all night at the other end, keeping the Bulls in the contest with a string of fantastic saves – the last one coming in injury time to foil Kwame Yeboah. 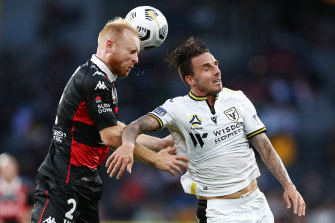 But the win was thoroughly deserved for Macarthur, whose positive attacking football and intriguing mix of experienced campaigners like Benat, and young stars like Hollman and Lachlan Rose already feels like the breath of fresh air the A-League desperately needed.

"First and foremost you've got to look at the owners who had a dream a couple of years ago to put together a new club in the competition," Bulls coach Ante Milicic said.

"With all the things that happened throughout the world it made it very difficult, but in the end we got there and today was an important day for the club, for the club's history, but also important for the game, and the A-League.

"We want to be competitive, we want to add value … it's just the first game, it's good to win, particularly against such a strong team like Western Sydney. We'll be satisfied tonight but we know we'll have to quickly recover and shift our focus to the Mariners on Sunday."

There was no shame in the defeat for the Wanderers in their first match under coach Carl Robinson, who would be rightly pleased with how quickly his remodelled team has gelled, albeit with no end product to show for it.

"I knew the game would be tight, very close. In close games you're hoping you get a little bit of luck. A few decisions here and there and it wasn't to be," Robinson said.

"Performance-wise, I can't fault them. They applied themselves excellently, the way they approached the game was excellent, and obviously we conceded a goal through a free kick through a deflection which actually wasn't a free kick.

"But you have to take it sometimes – we'll learn from it and move on."

A tension in the air – typical of a derby – was palpable from the outset, but Ziggy Gordon may not remember it well: his first minute in Wanderers colours ended with a ball straight to the head, courtesy of Loic Puyo's thump on goal from metres away.

Ten minutes later came the controversy. Prized Western Sydney recruit Graham Dorrans unleashed a shot from well outside the box that caught Aleksandar Jovanovic in the stomach. Referee Kurt Ams whistled straight away for a handball penalty, but he rightly revised his decision after visiting the VAR screen on the sideline.

From then on, Macarthur had the ascendancy. Their most promising attacking outlet proved to be Moudi Najjar, the Young Socceroos striker on loan to the Bulls this season from Melbourne City.

Playing on the left wing, Najjar often drifted inside and found numerous opportunities lurking in the space opened up by Matt Derbyshire's intelligent movement.

Najjar got his head onto tasty crosses from Ivan Franjic and Denis Genreau but couldn't hit the target with either, and had his best chance four minutes from the break, when he was picked out again by Rose, only to nod the ball fractionally wide of the right post.

The Wanderers responded with their best stretch of attacking football to that point, with a flurry of shots that tested Federici's reflexes – all coming in the shadows of the first half.

Ibini had the last sight on goal for the first half, taking a swipe at a loose ball that fell his way which whizzed past the wrong side of the upright, before Federici was again forced to deny efforts from James Troisi and Keanu Baccus on the other side of the break.