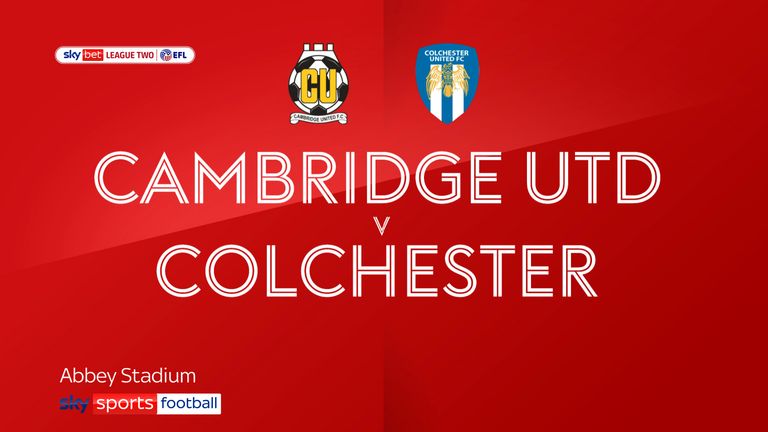 Cambridge’s first Sky Bet League Two victory in six matches was overshadowed after a small number of spectators booed as the players took the knee before kick-off.

A Paul Mullin double helped Cambridge climb above opponents Colchester, who pulled a goal back through Michael Folivi’s second-half penalty, and into the play-off places after the 2-1 win.

However, when players from both teams took the knee in support of the Black Lives Matter movement for the first time at the Abbey Stadium this season, boos were clearly audible, with fellow spectators quickly responding by applauding before the contest got under way.

The incident followed previous examples at Millwall and Colchester this month.

The Lions insisted they were “dismayed and saddened” by events at The Den ahead of the visit of Derby on December 5, when the long-awaited return of supporters was overshadowed by booing when players took the knee.

Colchester’s League Two game with Grimsby on the same day was preceded by fans booing the players’ anti-racism gesture before kick-off. The Essex club’s owner Robbie Cowling said afterwards that fans who want to boo players taking the knee are not welcome at the club.

After Jack Iredale’s overhit cross clipped the top of the crossbar, Colchester goalkeeper Dean Gerken ensured his team went in level at half-time.

He tipped Idris El Mizouni’s free-kick over just before the break and, from the resulting corner, made a superb save to keep out Harry Darling’s header.

Gerken was left helpless when Cambridge broke the deadlock in the 50th minute when Luke Hannant’s free-kick was headed home by Paul Mullin.

Mullin’s second of the night, his 18th goal of the season, came 15 minutes later as he tapped in an effort from strike partner Harvey Knibbs which was heading wide.

The visitors reduced the deficit only three minutes after as substitute Folivi converted from the penalty spot after he had been fouled by Darling.