Bayer Leverkusen sit pretty at the top of the Bundesliga and could be title outsiders… but can Leon Bailey, Lucas Alario and Co help them shake off their ‘Neverkusen’ tag?

Nothing says Christmas quite like a honking tractor horn.

As Bayer Leverkusen battled to victory over Hoffenheim last Sunday, the echoing quiet at the BayArena was suddenly interrupted by a chorus of tractors which had assembled outside the stadium.

Their bonnets draped in fairy lights and tinsel, the festive farmers tootled and parped their way through the second half before driving off to some other corner of the town. 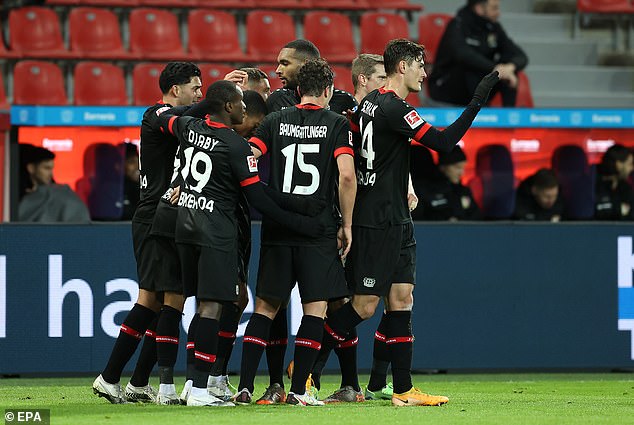 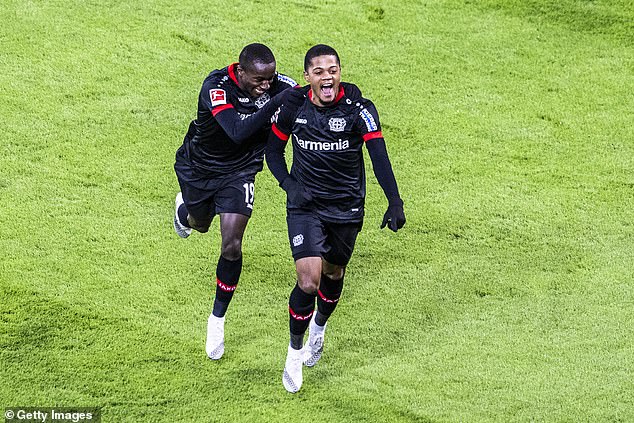 An attempt, as local media reported later, to spread some Christmas cheer to the locked down citizens of Leverkusen.

They needn’t have bothered. For despite the general gloom of December 2020, there was plenty of cause for good cheer at the BayArena.

With a 4-1 win over Hoffenheim, Peter Bosz’s side leapfrogged Bayern Munich to go top of the Bundesliga table.

It is still early days, of course, but as midfielder Julian Baumgartlinger insisted on Sunday, ‘this is worth something’. It is six years since Bayer last held top spot, and this time it is no fluke.

With their whirlwind front line and uncharacteristic solidity at the back, Bosz’s side have been among the highlights of this Bundesliga season so far. As they prepare to take on local rivals Cologne on Wednesday evening, they might even be considered outsiders for the title.

Not that anyone will really believe that until they see it. This, after all, is the famous ‘Neverkusen’, a club so good at not winning titles that it has become a part of their identity. 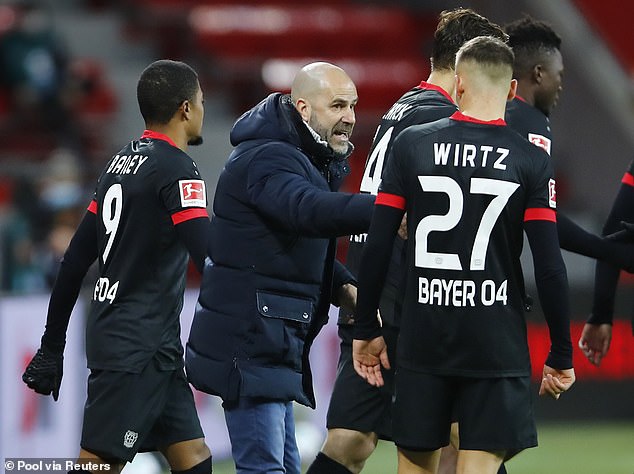 In 2000, they lost the title thanks to a final-day own goal from a young Michael Ballack. Two years later, they went one better. In the last few weeks of the 2001/02 season, they threw away a five-point lead at the top of the table and were losing finalists in both the German Cup and the Champions League. The treble of near misses has clung to them like a bad stench ever since.

There were wafts of it last July, as Bosz’s young team went down fighting in the cup final against Bayern. There is no shame in losing to the champions, but a goalkeeping howler and a chronic wastefulness in the final third on that night left Leverkusen wondering yet again what might have been.

After that game, many predicted a tough year, as talisman Kai Havertz left to follow in Ballack’s footsteps at Chelsea and striker Kevin Volland departed for Monaco. Yet far from suffering in their absence, the players who remained have appeared liberated this term.

In Lucas Alario, Leverkusen have a ruthless poacher who has scored three braces already this season. In 17-year-old Florian Wirtz, who faces his former club on Wednesday, they have a natural successor to Havertz. And in Moussa Diaby and Leon Bailey, they have devastating pace and penetration on the wings. 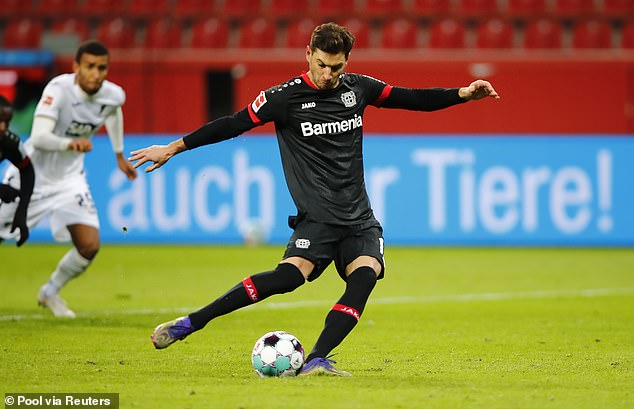 With three braces already this season, Lucas Alario has been another of their standout players

Bailey in particular has sparkled this year. A player long courted by the Premier League’s top clubs, the Jamaican winger is arguably enjoying his best season yet in the Bundesliga.

On Sunday, he opened the scoring with a melt-in-the-mouth long-range strike after just four minutes, before scoring again to take his season tally to nine goals in all competitions.

It was that 4-1 win over Hoffenheim which left Leverkusen sitting pretty at the top of the table, yet Bosz was quick to warn against complacency.

‘It’s a great experience to be top, but it was difficult to get here and it will be even more difficult to stay here. We’ve only played 11 games,’ said the Dutch coach on Tuesday.

The question is whether Leverkusen – and indeed Bosz himself – have the legs for a full season at the top. The former Ajax coach is still haunted by his car-crash spell in charge of Borussia Dortmund three years ago, in which a promising start quickly gave way to a dramatic collapse.

Yet if inconsistency and defensive frailty have been the achilles heel of Bosz’s swashbuckling teams, this Leverkusen outfit may be well placed to buck the trend.

They are now one of just two Bundesliga sides who are yet to be beaten this season, and have been uncharacteristically tight at the back, conceding fewer goals than anyone except RB Leipzig.

All that could still change, and Bosz was critical of his team’s defensive performance against Hoffenheim on Sunday. Yet if they can keep their footing, then perhaps Leverkusen’s ferocious front line can continue to surprise the Bundesliga.

The league has suffered in recent years as its top teams prioritise Champions League qualification over a full-scale challenge to Bayern’s hegemony. If they can keep it up, fearless Leverkusen could be a much-needed breath of fresh air.