Arsenal have already progressed into the last four of the competition after Eddie Nketiah starred with a clinical hat-trick in a 5-1 thrashing of League One Sunderland. That result ensured that only Premier League sides remain in competition, although we are already guaranteed to see a new winner crowned after Manchester City’s four-year stranglehold was finally brought to an end by West Ham in the fourth round.

The Hammers travel to Tottenham in one of two London derbies tonight, with a heavily-depleted Chelsea side visiting Brentford. The final tie sees Liverpool host Leicester with managers having to juggle their priorities carefully between player welfare and the chance of claiming a piece of silverware at such a chaotic and uncertain time of the season. Follow the draw live below at the conclusion of Liverpool vs Leicester: 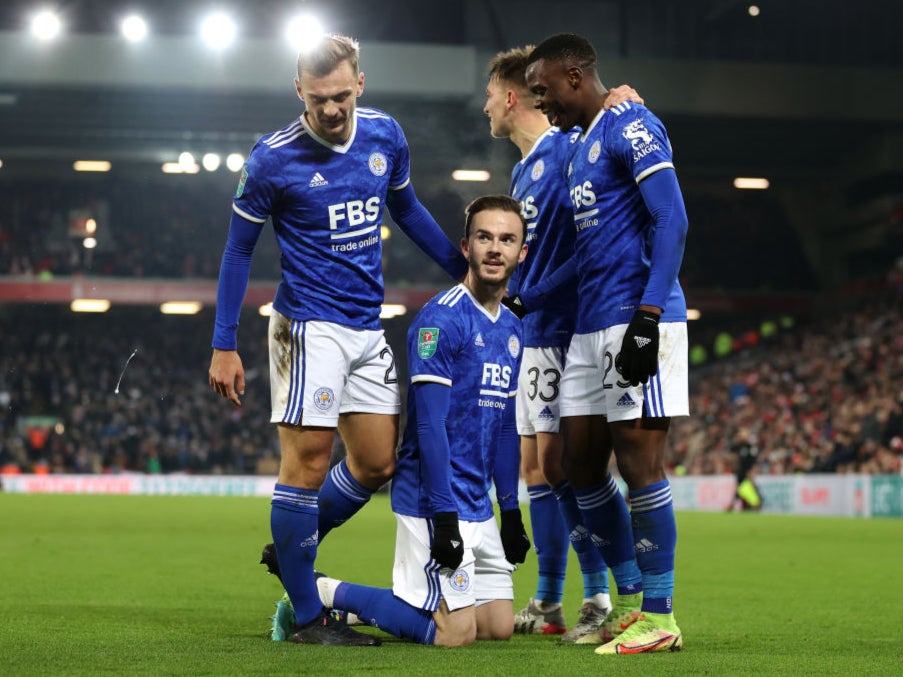 51 mins: Milner fouls Daka as the Leicester striker wins an aerial ball. The Foxes are awarded a free kick that is slid into the left side of the box for Daka to chase down but he’s beaten to it by one of Liverpool’s defenders, Gomez I think, and the Reds work the ball out of the box.

48 mins: Neco Williams has dropped back to right-back with Diogo Jota taking up the spot on Liverpool’s right wing. Klopp is giving it a go with those substitutions but Liverpool will have to score the next goal. It’ll set up an interesting finish this game if they do.

Williams carries the ball down the right wing but is tackled by Dewsbury-Hall who knocks the ball out for a throw in.

Kick off: Liverpool get the game back underway with three changes made by Jurgen Klopp. James Milner, Ibrahima Konate and Diogo Jota are all on with Conor Bradley, Billy Koumetio, and Tyler Morton the men replaced.

The draw for the Carabao Cup takes place after the conclusion of this round of fixtures. It will be show live on Sky Sports after Tottenham’s match against West Ham. Here’s how to watch: 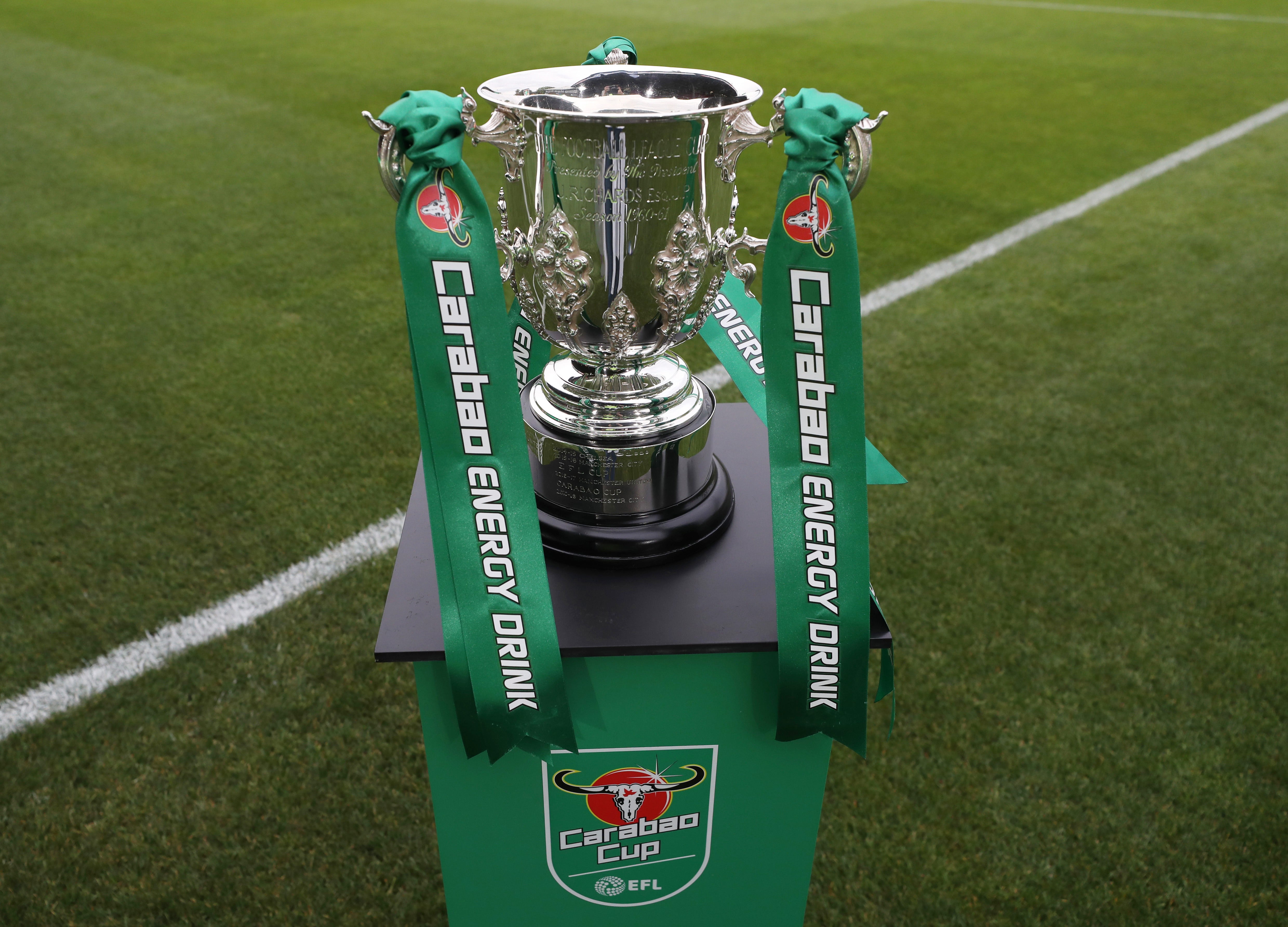 Four goals in the first half at Anfield as Leicester take a commanding lead over Liverpool. Will we see more in the second 45 minutes? 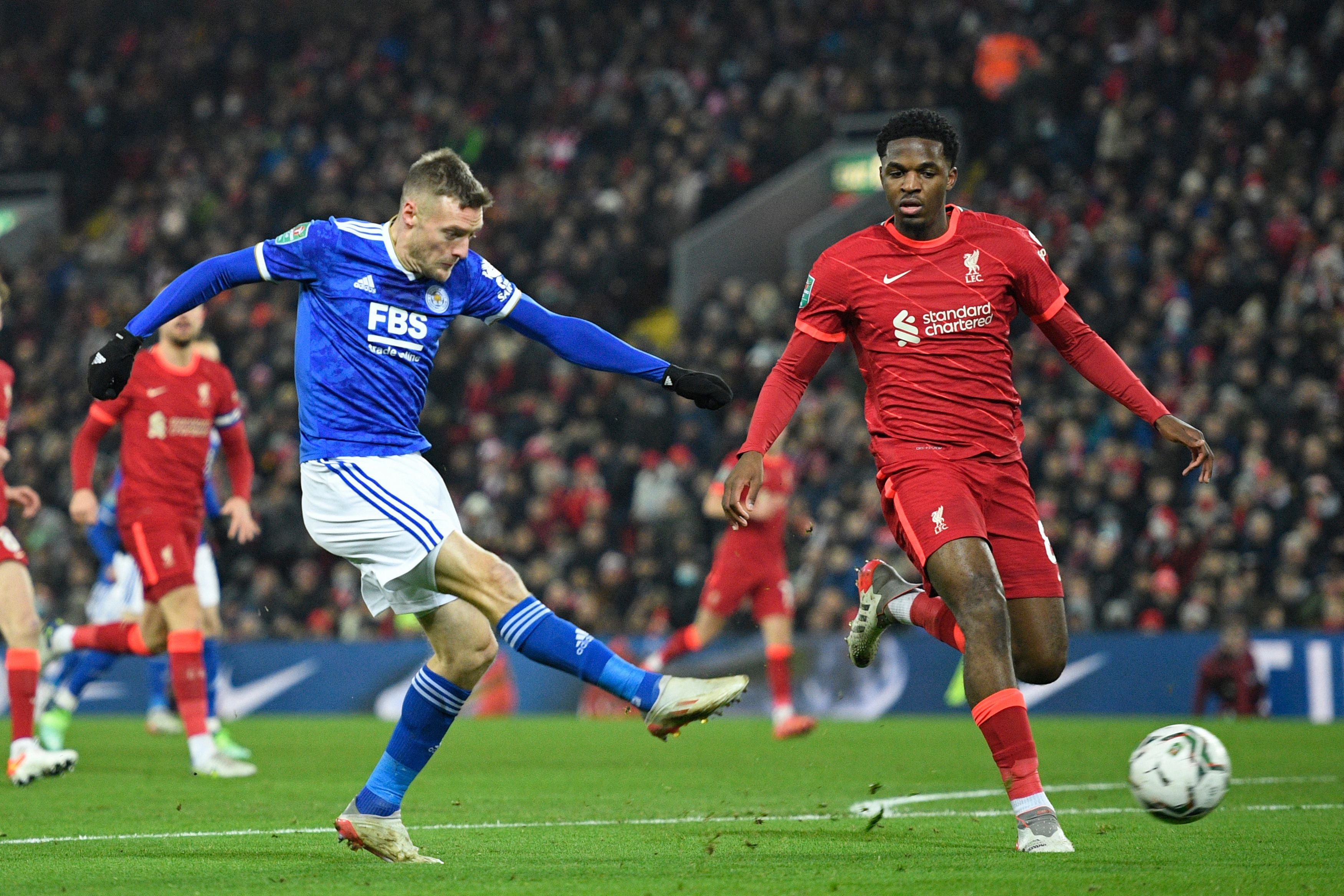 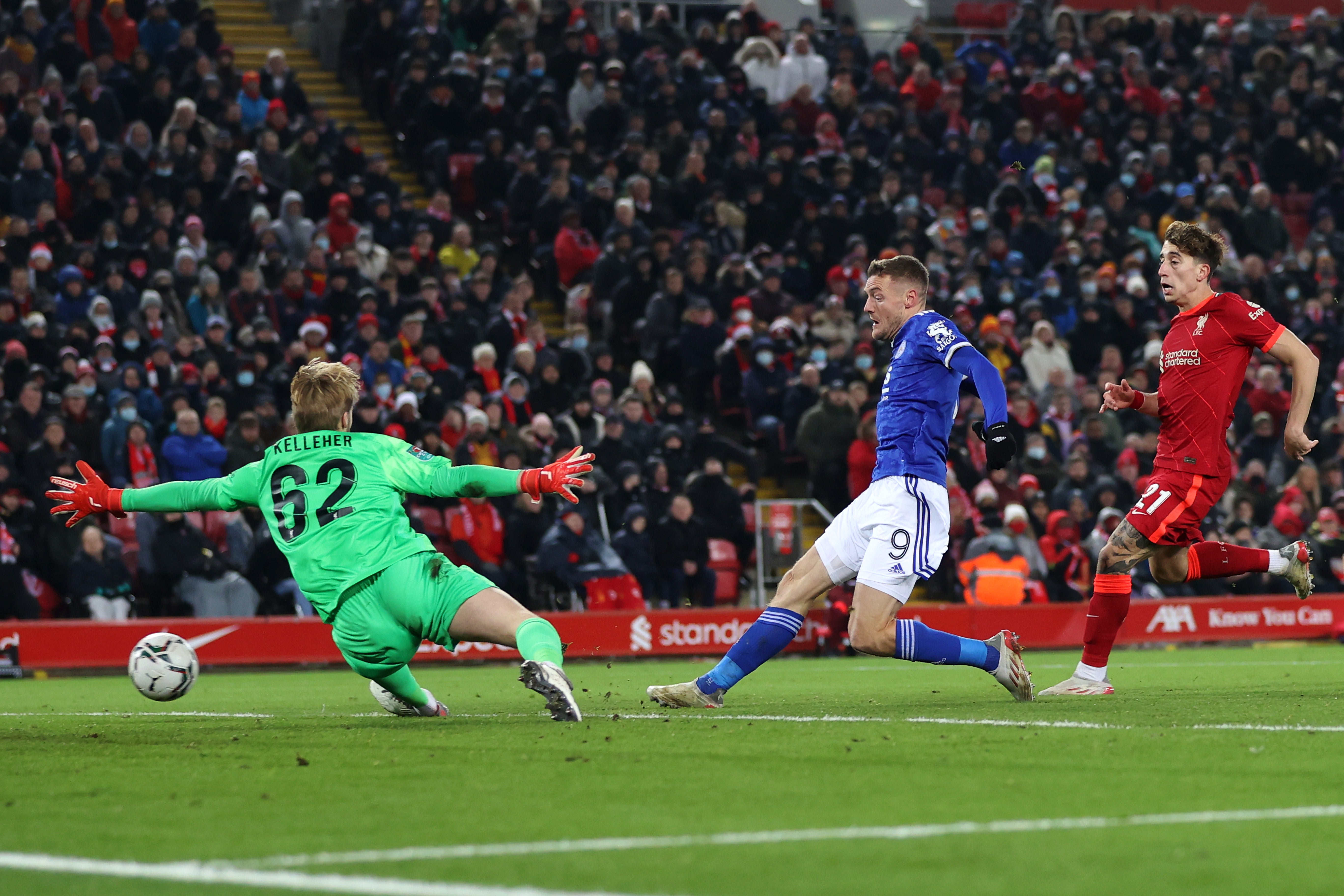 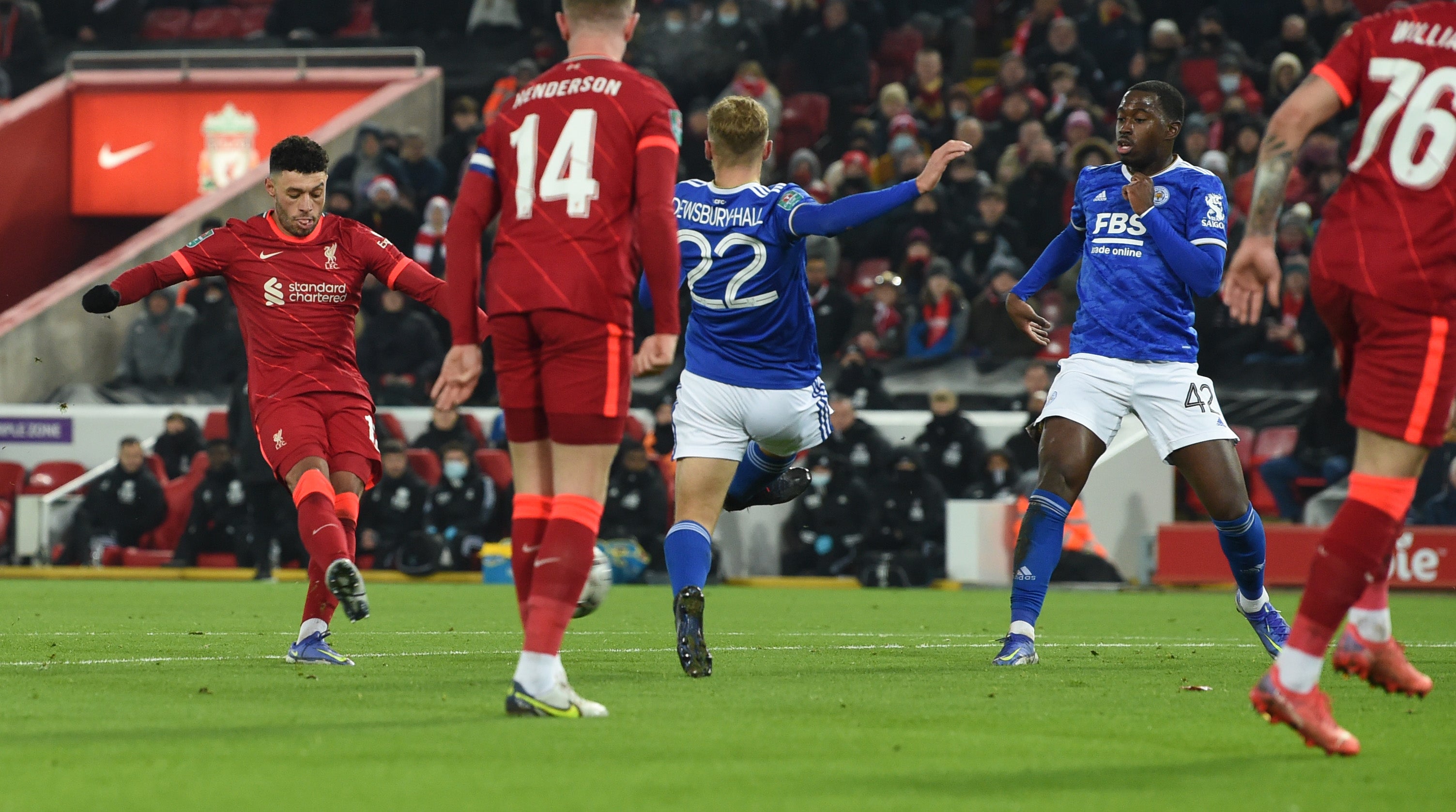 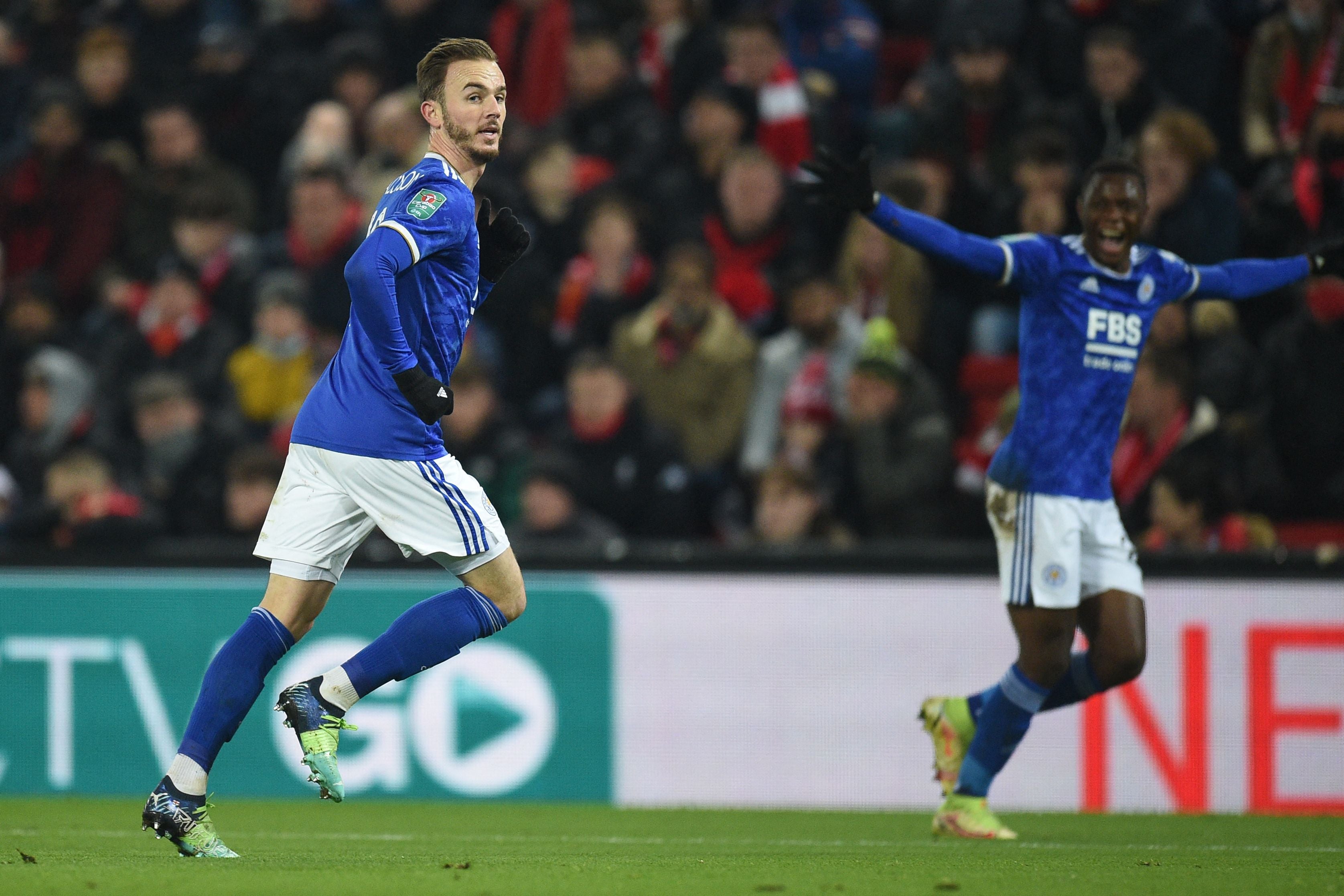 Lots of action in the Tottenham vs West Ham quarter-final going on as well. Steven Bergwijn put Spurs in front before Jarrod Bowen equalised for the Hammers. Lucas Moura then poked one home from the edge of the six-yard box to give Tottenham the lead at the break. Brentford vs Chelsea remains goalless.

45+4 mins: Oh hello. Conor Bradley steps up the pitch from his position at right-back and brings the ball down the wing. He cuts inside and squeezes into the box before firing an effort at Kasper Schmeichel who smother it low down to his right.

The whistle goes for half-time and Leicester take a two-goal cushion into the break.

45+2 mins: Williams whips a cross into the box from the right but Albrighton beats Minamino to it and heads the ball out of the area. Oxlade-Chamberlain collects and sends it over to Tsimikas on the opposite wing. He delivers another cross but can’t pick out a teammate.

45 mins: Four minutes of added time to play before the end of the first half.

42 mins: Leicester are having some trouble with Ricardo Pereira. He’s gone down one or two times since being caught on the ankle by a Tyler Morton tackle. There’s another break in play as Ricardo gets some treatment.

Marc Albrighton is called on by Brendan Rodgers, he gets ready quickly and replaces Ricardo who limps off the pitch.