UEFA are considering completing this season’s Champions League and Europa League competitions in a three-week block during August. That is one idea being considered by the continent’s governing body, who are desperately looking for a solution amid the coronavirus pandemic that has ground professional football to a halt.

UEFA have confirmed that the Champions League and Europa League have been suspended indefinitely while the COVID-19 crisis continues to wreak havoc across Europe.

The Premier League and Scottish Premiership still have interests in the competitions, with Manchester City, Chelsea, Manchester United, Wolves and Rangers waiting to fulfil their commitments.

UEFA face a host of problems in their attempt to complete the Champions League and Europa League.

To meet the August proposal, the Premier League and other league across the continent will need to be up-and-running by mid-June.

The remaining teams with an interest in Europe will also need to be willing to continue playing for up to three weeks at the height of the summer. 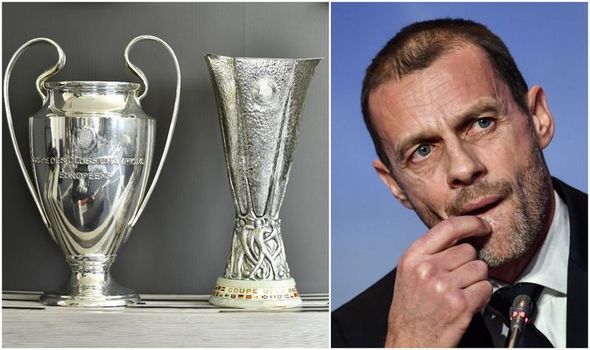 A tight turnaround between this season and next is also being considered if public health conditions allow.

Restarting the Champions League and Europa League in August could then cut into the following campaign’s fixtures.

UEFA president Aleksander Ceferin has already ruled out postponing the competitions beyond August.

“We can’t play it out in September or October,” Ceferin said.

He has, however, hinted that games could take place in stadiums without fans present.

“We are waiting for the development of this terrible situation in the world, and mainly in Europe,” he added.

“It is still better to play the game behind closed doors and have it on TV, which is what the people need and want because it brings positive energy to their homes, than not playing at all.

“That’s what the people want, that brings positive energy, and it will be July or August.”

UEFA also face the pressing need to ensure their commitments for television broadcasters are fulfilled.