Match report and highlights as Chelsea fail to spark into life on the pitch after they decide to withdraw from European Super League; Ben White sent off for second yellow card in second-half stoppage time

Danny Welbeck hit the post and Adam Lallana missed a glorious chance late on to deny Brighton a famous victory at Stamford Bridge in a 0-0 draw with Chelsea.

Thomas Tuchel’s side never got going in a game delayed by 15 minutes due to protests outside Stamford Bridge against the European Super League stopping both teams from reaching the ground, and managed only three shots on target all night against a stoic Brighton backline.

Instead, the visitors should have snatched victory late on but passed up a couple of gilt-edged chances, the first coming after Kurt Zouma was caught in possession by Neal Maupay, who found Lallana – only for the substitute to miss the far post when clean through.

Seconds later, Chelsea were again caught on the ball as Jorginho was robbed, allowing Welbeck to strike from 20 yards, but the width of the woodwork denied him a superb late winner, before Ben White was sent off for a second yellow in added time.

Man of the match: Ben White

The point moves Chelsea back into the top four, ahead of West Ham on goal difference, while Brighton are seven points clear of the bottom three, having played a game less than 18th-placed Fulham.

On a night of high drama around Stamford Bridge, matters on the pitch had a lot to live up to in order to match the news Chelsea were planning to withdraw from the European Super League following protests by hundreds of fans outside the stadium.

It may have felt a little after the lord mayor’s show, and it certainly looked like it. Tuchel predicted his side would be “a little distracted” by the evening’s events and it took them 17 minutes to register their first shot, when Christian Pulisic turned Ben White well before skewing well wide.

A half of few chances, thanks to some committed Brighton defending and a real lack of tempo in Chelsea’s play, could have turned out differently had White’s poor touch in his own box been turned home by Hakim Ziyech, who instead fired straight at Robert Sanchez. 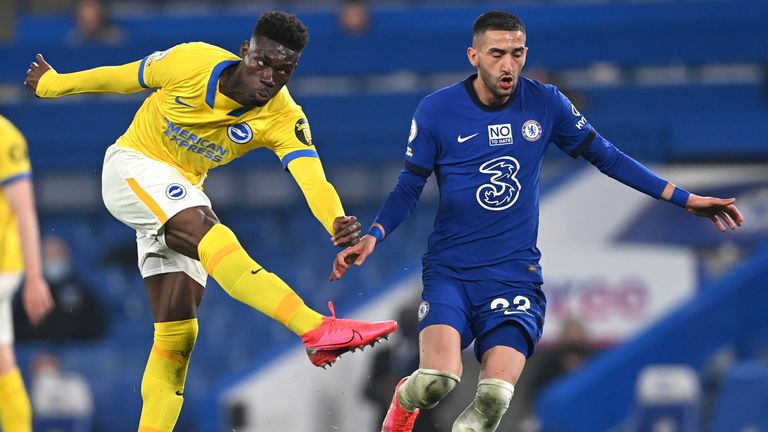 At the other end, Yves Bissouma’s goalbound strike was diverted just over his own bar by Jorginho, with Chelsea given a reminder they could not switch off in their own half despite enjoying the majority of the play.

Little changed for the Champions League semi-finalists after half-time, with Chelsea managing only two shots in the entire 45 minutes, and instead considering themselves lucky Brighton had left their shooting boots on the south coast.

With time running out, Zouma’s decision to turn into danger nearly proved fatal as Neal Maupay robbed him before feeding Lallana, who missed the target altogether when clean through.

Moments later Welbeck went closer still after Jorginho was caught in possession, but fired against the crossbar from distance with Arrizabalaga beaten.

Giroud, Chelsea’s saviour more than once this season, could have enhanced that reputation in the dying minutes when meeting Callum Hudson-Odoi’s low ball, but swept wide at the near post when under pressure.

Man of the match – Ben White

Despite his late red card, White was the pick of an impressive bunch at the back for Brighton, who were barely troubled by Chelsea throughout.

Only the Blues and Manchester City have kept more clean sheets since the turn of the year than the Seagulls, and White’s performance at Stamford Bridge highlighted exactly why, helping to keep Robert Sanchez’s night quiet enough to make only one save of note all game.

🥅 Brighton have kept 8 PL clean sheets since the start of the year. Only Man City & Chelsea (both 10) have kept more in that time #CHEBHA pic.twitter.com/o6D6GaYOkK