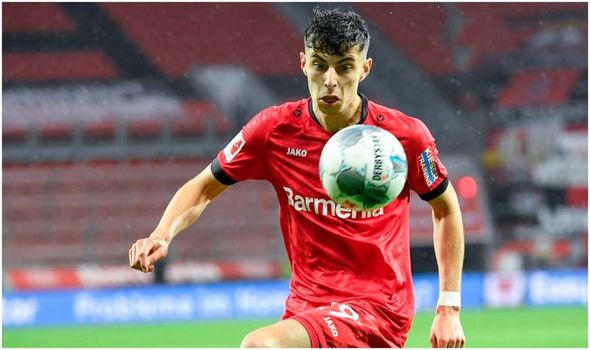 Chelsea and Manchester United must meet three demands if they are to stand a chance of signing Kai Havertz from Bayer Leverkusen. The Germany international is hot property ahead of the summer transfer window.

Havertz scored five goals in four games to be named the Bundesliga player of the month for May to underline his talent. He saw off competition from the likes of Chelsea-bound Timo Werner for the gong.

Unsurprisingly, Leverkusen are reluctant to sell and have responded to the mounting interest by slapping a €100million (£89.5m) asking price on their prized asset.

Bundesliga champions Bayern Munich and La Liga giants Real Madrid are also monitoring Havertz who, according to the Manchester Evening News, is open to a Premier League switch.

There will reportedly be three factors that will be crucial to deciding the 20-year-old’s next club.

A regular role is the most important thing on Havertz’s mind because he is eager to ensure he continues growing in importance for Joachim Low’s Germany team ahead of next summer’s European Championship.

Competing in the Champions League is key because he wants to strut his stuff on the biggest stage. Leverkusen’s group stage exit meant he was limited to six appearances in this season’s competition.

Havert is also eager to join a club with a project for the future and be an integral part of that.

Leverkusen chief Fernando Carro has admitted Havertz is considering his future, despite having two years left to run on his current deal.

“Many clubs are interested in him,” Carro said. “I see the player’s wish to take the next step sometime in the near future.

“You have to respect that as much as the fact that he has a contract in until 2022.”

“We haven’t given up hope that he’ll stay with us,” Voller said.

“We try to give him every possibility that he can call up his qualities. He made that outstanding in the second half of the season.”