Chelsea boss Frank Lampard has revealed he sorted the drama over the second penalty the Blues were awarded at Stamford Bridge which saw Tammy Abraham try and take the spot kick. Cesar Azpilicueta intervened to make sure the usual penalty taker Jorginho had the opportunity to score.

The Blues ran out 4-0 winners thanks to goals from Ben Chilwell, Kurt Zouma and two penalties from Jorginho.

The second spot kick was eventually taken by the midfielder despite Abraham picking up the ball as if he wanted the opportunity to net.

Chelsea captain Azpilicueta stepped in to ensure usual penalty taker Jorginho took it though, something Lampard agreed with.

The Blues manager underlined that by revealing they had squashed the issue in the dressing room. 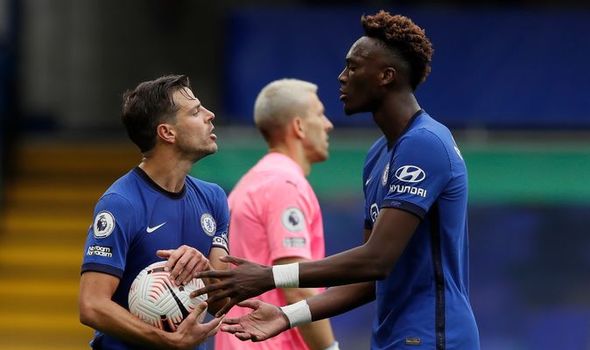 Lampard said on BT Sport: “It’s been dealt with. No problems. Just dealt with. I want leaders – and a little bit of conflict. It’s good that Tammy was enthusiastic but you don’t jump ahead of the list.”

Lampard was also very pleased with the way his side played to beat Crystal Palace in convincing fashion.

He explained: “Not too many put four past Crystal Palace. First half we started well, we came off it a little bit. We needed a bit more. It was great for us to get four goals.

“Just the urgency of our game needed more. We needed to get Ben Chilwell into the game. We can’t allow Palace’s back four to say dealing with Chelsea’s front line was easy.

“Ben Chilwell was fantastic today. His ability to be so high up the pitch, and that’s not a bad thing, and his great quality on the ball. The lads who have come in have all had issues so we need to give them time but Ben has shown what he’s all about.