Chelsea are reportedly close to signing free agent Malang Sarr in a bid to boost their defensive options. The French ace came through the ranks at Nice but has left the Ligue 1 outfit after failing to agree a new contract.

Chelsea are in the midst of a squad overhaul and already agreed deals for both Hakim Ziyech and Timo Werner before the summer transfer window had even opened.

They are now set to complete the signings of Ben Chilwell and Kai Havertz this week while Thiago Silva is expected to move to Stamford Bridge in a free transfer from Paris Saint-Germain.

And the Blues aren’t going to stop there, with more reinforcements required as Frank Lampard looks to rebuild his roster ahead of the 2020/21 season.

Central defence is a particular area of concern, even if 35-year-old Silva is signed on a short-term deal, and a move for Sarr would provide more long-term security at Stamford Bridge. 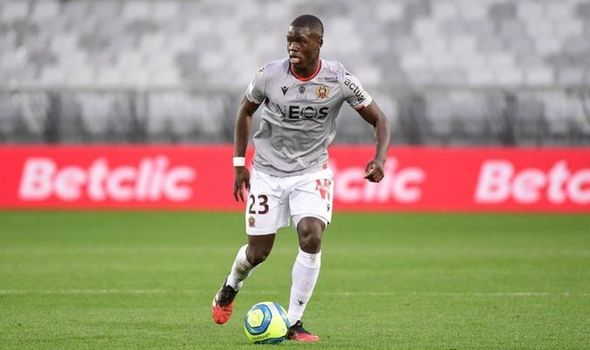 Chelsea are edging closer to snapping up the France Under-21 international, according to The Athletic.

Offering Sarr a five-year deal would suggest Lampard sees the 21-year-old as a significant part of his plans going forward.

And the central defender, who made 19 Ligue 1 appearances as Nice finished fifth this season, will back his chances of claiming a spot in the first-team squad at Stamford Bridge.

Lampard is yet to decide upon his preferred centre-back pairing with Antonio Rudiger, Andreas Christensen and Kurt Zouma all failing to perform consistently last term.

Fikayo Tomori started the season in the starting XI but fell out of favour at the turn of the year and is now being linked with a loan move to either Everton or Rennes.

Sarr will therefore hope to make an instant impression on Lampard in pre-season once a move is finalised, although Sky Sports reported at the weekend that the youngster could find himself immediately loaned out.

On Saturday, Kaveh Solhekol said: “Chelsea in talks to sign France U21 centre back Malang Sarr.

“He’s a free agent after his Nice contract ran out this summer. If Chelsea sign him they will send him out on loan.”

Sarr can play at left-back or centrally and was even handed the captain’s armband for one game last season and steered Nice to a 2-0 win over Toulouse.

Arsenal have previously been linked with the French defender but Chelsea now look in pole position to secure a deal, potentially as early as this week.