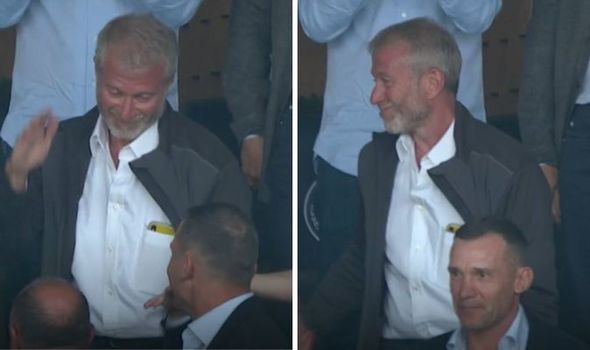 Roman Abramovich was absolutely ecstatic after Kai Havertz put Chelsea ahead in the Champions League final. The Russian owner was inside the Estadio do Dragao to watch the Blues’ highly-contested clash with Manchester City and his nerves were finally eased towards the end of the first half as Havertz broke the deadlock.

Splitting the City defence in two, Havertz made a smart run in behind Ruben Dias as Oleksandr Zinchenko struggled to track him.

Havertz then rounded Ederson despite a touch off the goalkeeper’s hand before slotting into the net.

And cameras captured a passionate Abramovich enjoying the moment with those around him.

Former Chelsea striker Andriy Shevchenko, who is a close friend of Abramovich, was sat in front.

The Ukrainian was signed by Jose Mourinho and although he didn’t replicate his AC Milan form in west London he is still remembered fondly, playing several matches for the legends side.