On Tuesday, Chelsea’s Twitter account posted a video with the caption ‘Back to Anfield tomorrow’, which was pulled down after a few hours. It’s not hard to guess the contents of the clip, dating back to 27 April 2014 and a slip that is still celebrated through song around the country.

Steven Gerrard momentarily took his eye off a routine pass from Mamadou Sakho, losing control of the ball and then his footing as Demba Ba raced through to score with Liverpool losing the match and ultimately the league title they long craved.

Those seconds had stung for years: a day framed around the Merseysiders taking the biggest step towards being champions ended up being when the dream fell to its knees.

But no more. Liverpool are England’s best, readying to lift the Premier League trophy on Wednesday with Chelsea – 30 points in the distance – the visitors to Anfield. It seemed a bizarre time to post such a tweet given the club will be part of the guard of honour pre-match and there to witness the flashing lights and fireworks as Jordan Henderson shuffles the Holy Grail above his head in the aftermath.

It looked even more out of place as Frank Lampard used his press conference to point out Chelsea “have a long way to go” to close ground on Liverpool.

“We have to be realistic about that,” he said. “We’re at a different point in the curve and we have to respect that and work towards it. The points don’t lie over the last few seasons but we have to have some strong targets and we want to close that gap.

“We go there with huge respect, we have to respect a team that won the league well.”

Perhaps that it was the tweet was deleted, it looked a bit silly to rewind to the past when Chelsea are trying to climb out of the shadows at present. It is poetic that Henderson will lift the trophy on Wednesday, the only player remaining from the 2013-14 failed title tilt.

The midfielder was not involved on that day when Jose Mourinho insisted Chelsea “would not be the clowns in the circus” and ruined the party mood at Anfield. He was serving a three-match suspension after a late sending off against eventual champions Manchester City. Brendan Rodgers, Liverpool manager at the time, believed Henderson’s absence was more of a factor than Gerrard’s slip. He was one of the driving forces of the club’s push for domestic glory and there was a dip in intensity, pressing powers and final third runs without him.

Jurgen Klopp had been told the same by Melwood staff involved in the fixture six years ago.

Liverpool lift the Champions League (Getty)“What I heard from everybody was they think that was the main reason why Liverpool couldn’t make it over the line,” Klopp said of his captain’s suspension back then. “I know Hendo pretty well now and it’s very possible that’s one of the reasons, 100 percent.

“It’s great, it’s wonderful. I could talk for a whole hour about why it’s so deserving for Hendo to lift the trophy and everybody here sees it exactly the same.

“I thought it’s really funny, because of course we were happy that he’s not that seriously injured that he can be part of the celebrations. But I heard that when Liverpool won the title the last time, the skipper was injured as well. Did you know that? Alan Hansen was injured, he had a knee problem.

“So the circle closes if you want. It’s the best possible thing that could happen. 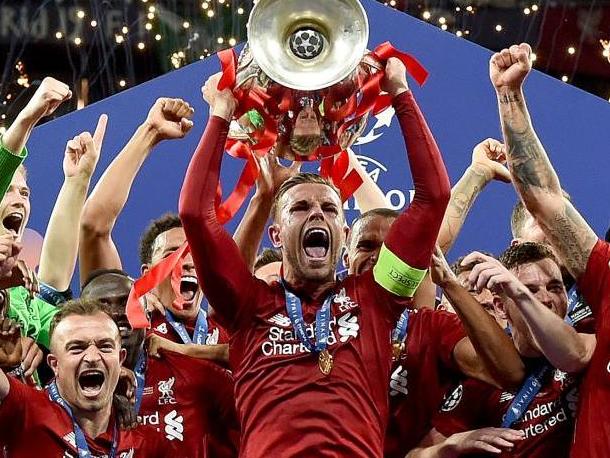 “I’m really happy that it’s exactly like this. It’s just a really nice story. And Hendo had to be patient to put it right. But he did it.”

The tale has another lovely arc, with Klopp’s directive for fans to go from ‘doubters to believers’ during his unveiling finally reaching the ultimate point.

“It 100 percent will be one of the greatest days of my life to finally get our hands on this trophy that everyone has waited so long for,” he said at Melwood on Tuesday. “A few years ago, not many thought we could do it. I’m so proud. It’s a very important day, but not the last very important one for us.

“This doubters to believers thing… I had absolutely no idea where that came from in my mind. But that it was essential that the people had to become from supporters to being supportive.

“I had to remind people how important it was to put in a proper performance on the pitch and off the pitch, it was essential. I knew that as I came from a very emotional club – well two, actually [Mainz and Borussia Dortmund] – so that was pretty much common sense.

“How we did it, a lot of good decisions on and off the pitch, a lot of effort from the people, incredible support from the club as well and things can happen. And in the end, a dream came true. That is really special for all of us.”

Klopp feels that the moment Liverpool have the silverware they have salivated over for three decades in their hands will mark “one of the big stories in football history”.

They’ve had to navigate a global pandemic to claim the ultimate prize, which caps off a year in which they were also crowned kings of Europe, Super Cup and Club World Cup winners. They are the first British team to ever hold all those honours simultaneously. 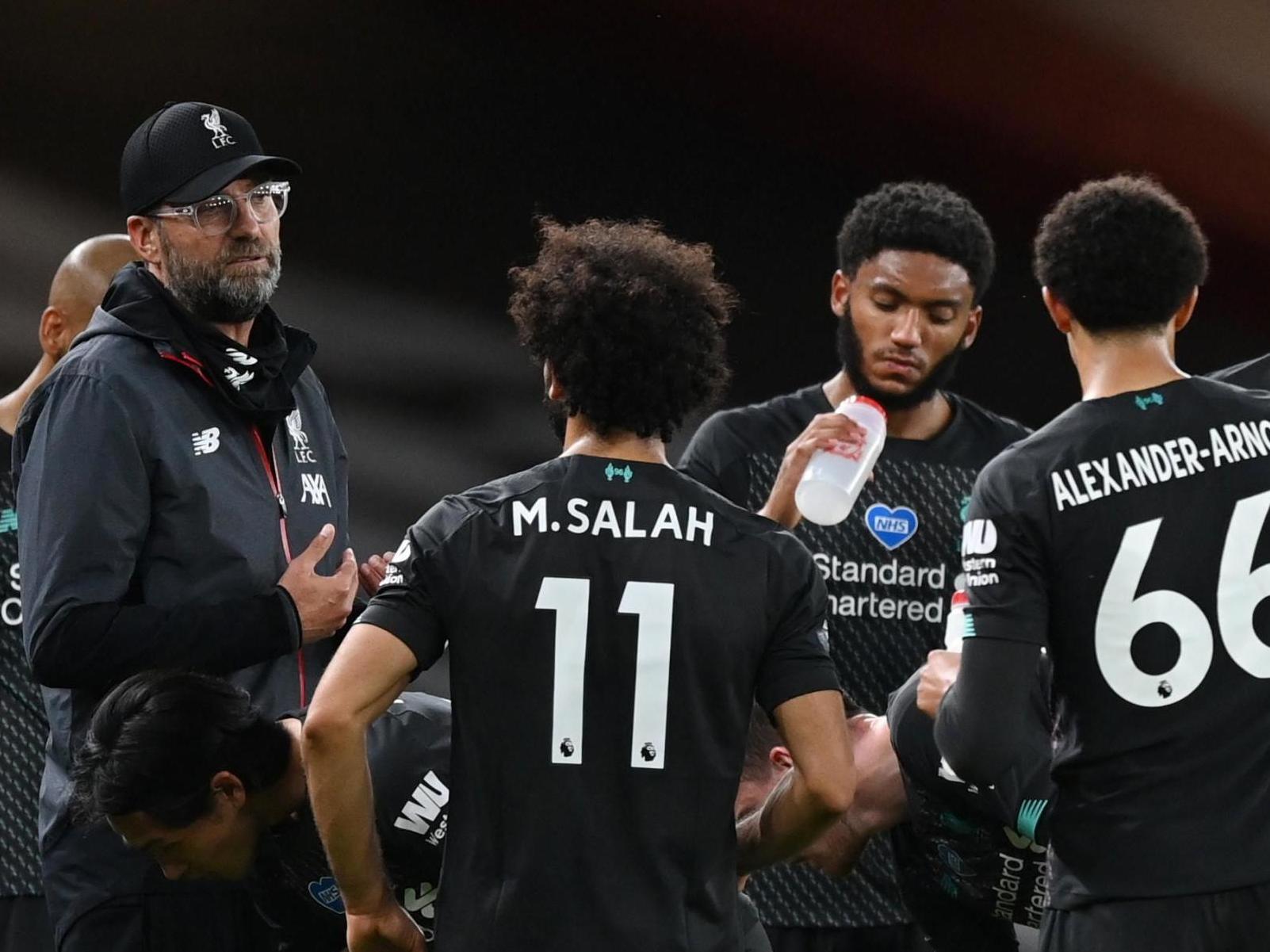 “In the moment, when I spoke about the last 13 or 14 months, it was for sure the most exceptional and successful year of my career. So being champion of Europe, England, the world, it doesn’t happen too often. So I think it makes sense that we take a picture with all four trophies, because I don’t think there are a lot of pictures in existence where a club has all four of these trophies.

“We will do that 100 percent and rightly so. It’s not that I had to say it to the players, but I have mentioned it: This is absolutely special. This is the moment, pretty much where you talk about things after a season, but this is the moment that you really have to cherish.

“You have to appreciate it and reflect, 100 percent, it has been exceptional. The last 13 or 14 months of this team, it didn’t start then, it started before then but we won all that since then so that makes it really really special.

“But all the things in the one-and-a-half to two years before were really exceptional. We just didn’t get the reward. It goes to show, if you are good and you work hard, which we have obviously done and you put in all you can, there is a chance.

“It doesn’t mean you can get it as we saw the year before, but there is a chance. We were ready to work for this chance and in the end, the boys made it happen.”

It is remarkable that after such a lengthy wait for the title, Liverpool became the earliest champions in history.

“We won the league with seven matchdays before the season ends, which is absolutely incredible,” Klopp agreed. “But that’s another challenge to be honest and was something I probably didn’t think about when I dreamed about it.

“It’s 100 percent the moment when we get the trophy which will be what it’s all about. I think it’s one of the big stories in football history. I think if somebody would have had the chance to decide, ‘Okay, you can become a champion in any country this year, any you can decide about which team you want to be in – to have it very special. Make your choice.’

“I think the choice would have been Liverpool, because it was the one, which everybody wants to be part of, I think, and we are lucky enough to be part of this.

“I appreciate that a lot, to be honest, it’s just that it’s a really big one. Not that other championships will be ever forgotten by the supporters, but this one, I think nobody will ever forget. That makes this pretty special.”