Goals either side of half-time from Hakim Ziyech and Emerson were enough to see off Atletico Madrid 3-0 on aggregate and book Chelsea’s place in the quarter-finals of the Champions League. Plenty of fans were drawn to the stands though as several of those players not involved went wild celebrating.

Chelsea star Thiago Silva managed to deliver on his promise during the win over Atletico Madrid on Wednesday, despite not being on the pitch.

Goals from Hakim Ziyech and Emerson booked the Blues’ place in the quarter-finals of the Champions League for the first time in eight years.

Several important players were missing from the Chelsea side, but Thomas Tuchel set up his side expertly on the night.

One those not available was experienced defender Thiago Silva who has been out since suffering a thigh injury against Tottenham last month.

JUST IN: Chelsea’s win over Atletico Madrid proves Tuchel is right to back star 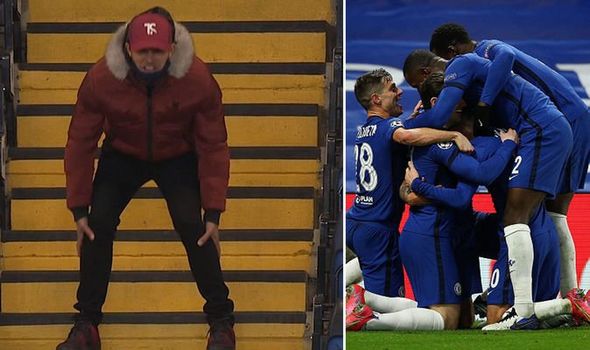 However, he didn’t seem to be particularly hampered in the stands as he, along with Mason Mount and Jorginho, went wild in the celebrations.

Silva had promised that he would be doing exactly that on social media hours before kick off.

He tweeted ahead of the game: “Unfortunately I won’t be in the field with you tonight @chelseafc, but I’ll be cheering from the stands of #StamfordBridge!! God bless you all.”

Silva could also be seen shouting and coaching from up in the stands as emotions truly took over. 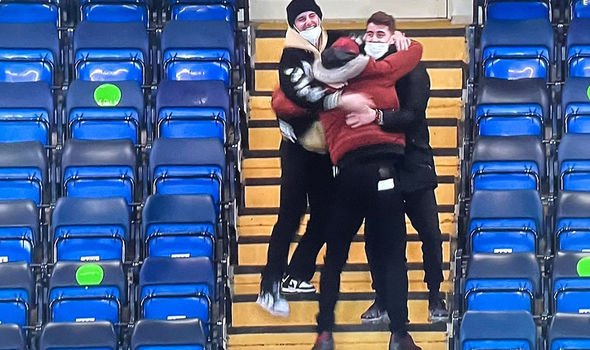 Tuchel said after the match that he was delighted with the overall performance against a physical Atleti side.

“You could really feel that everyone totally wanted it and we got through, deserved. A good win for us.”

“We know that we cannot find solutions with our offensive play, we will always rely on our physical strength and the capability to play an intensive game because we know we are used to it in the Premier League.

“We were absolutely not afraid to put this game on a physical level if we didn’t get the offensive solutions all the time, because it is hard to create chances against them.

“It’s hard to enjoy games, they are a very tough team to play, but we are as well so we enjoyed the battle.

“I think the guys were totally on it, totally sharp. Everyone enjoyed the competition and we were super hungry to go through.”

The draw for the quarter final takes place on Friday.