Chelsea transfer target Kai Havertz has been told to “bulk up” to help fulfil his potential. Bayer Leverkusen forward Havertz is heavily linked with a move to Chelsea this summer. The Germany international would be the third attacking signing for Frank Lampard following the arrivals of Hakim Ziyech and Timo Werner.

Former Rangers midfielder Kevin Thomson is a big fan of the 20-year-old and reckons he could become one of the best players around.

However, Thomson says Havertz should add a bit more to his frame.

“If he’s going to go for £80m-£90m then you’d probably expect him to expect to score,” Thomson said on BT Sport. 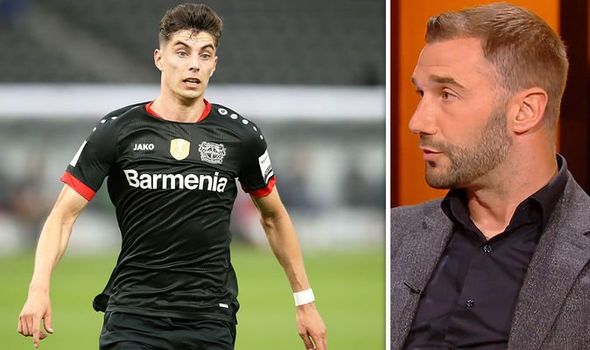 “But you can see his quality there, his wee bits of movement, drifting off players.

“So difficult to mark and you can he’s got quality in abundance.

“He’s a good athlete, he’s a good size, he actually looks as though he can bulk up and be a wee bit more powerful, he still looks quite beanpoley.

“So it will be interesting to see him develop. But I think when he gets to the peak years, 27, 28, he could be as good as anything.”

Ahead of the match, Thomson said it was clear why the likes of Chelsea are tracking Havertz.

He said: “He’s a real top player, it’s there for everyone to see and I’ve got no doubt if he does go into a different team in Europe, whether he ends up in the English Premier League, I’m pretty sure he will take it by storm.

“He’s a real talent, I think unusual for a forward player, he’ll score goals with his head but he’ll also run in behind. He looks a real star.”

“He does [score different types of goals], he can play in different positions around the front areas and that’s a real skill,” Weir said.

“You see the goals he scores as well, they’re all different types of goals.

“He scores with his head, both feet, he can score off a No 9 or he can be the No 9 himself.

“He’s got real good variation in his play and you can see why the top clubs really are looking at him.”