Melbourne City are into their first ever A-League grand final thanks to two second-half goals against Western United in a semi-final in which the league newcomers had looked the more likely winners for long periods of the game.

A penalty midway through the second half, converted by Jamie Maclaren, and a late goal when a Craig Noone corner was turned into his own net by Tomoki Imai were enough to ensure City progressed 2-0. 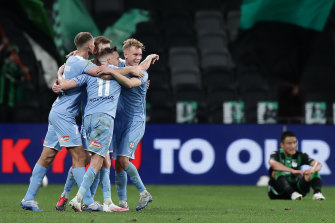 Mark Rudan's Western side was well-drilled, structured and organised; they barely missed a beat without the veteran Andrew Durante, the man who regularly co-ordinates their defensive set up, with Tommy Uskok settling into the back three alongside Aaron Calver and Imai.

City, who had been so adventurous in their three games since the A-League resumption, were muted and muzzled for the first half as midfielders Josh Brillante and Florin Berenguer – back from injury – struggled to create any openings.

City were forced to resort largely to long balls over the top, looking to capitalise on the pace of Lachlan Wales and Noone out wide and Maclaren through the middle.

Alessandro Diamanti and Max Burgess provide much of Western's inspiration from their attacking midfield berths, but a lot of their drive came from Josh Risdon and Connor Pain down the right and left flanks, with young midfielder Sebastian Pasquali adding support. 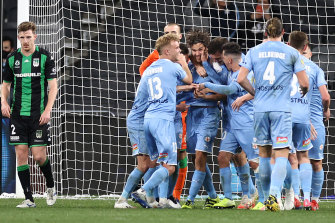 Burgess, linking with Pain on the left, found plenty of space to exploit City's Harrison Delbridge if the defender, more often a centre-back, was left exposed in space.

A Maclaren strike in the 18th minute was disallowed when Wales was judged to be offside in the build-up as goalkeeper Tom Glover's long delivery floated into Western's half and the VAR ruled in Western's favour.

But it was Glover who was the busier keeper through most of the game. Shortly after Maclaren's non-goal the City goalkeeper was forced to dive to deny a strongly hit shot from Risdon.

Diamanti volleyed wide, then Glover had to dive smartly to keep out Burgess' shot from outside the area.

City began the second half in more urgent style, Curtis Good heading over from a corner and Berenguer spurning an opportunity. 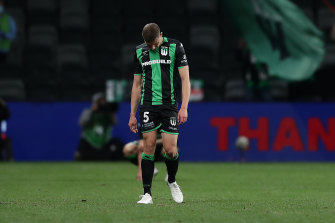 But Western then stepped up a gear themselves, driving down the wings and pulling the City rearguard around as Pasquali, Diamanti and Steven Lustica took control of midfield.

Lustica came close to breaking the deadlock in the 58th minute with a close-range shot after a Diamanti cross was headed down only for Glover to fingertip the ball to safety.

But big games turn on big moments; at one end, Glover's goalkeeping, and an Aaron Calver slip at the other when the defender upended Maclaren as he bore down on goal.

VAR upheld referee Alireza Faghani's decision to give a penalty, and Maclaren stayed cool to drive home his 23rd goal of the season and put City in front.

Rudan brought on Josh Cavallo for Pain and introduced the speedy Dylan Pierais as the game began to stretch in the last 20 minutes.

Adrian Luna tried from distance and Western keeper Filip Kurto dived to make the save, but Western were always likely to be vulnerable as they chased an equaliser, and so it proved when Noone's corner created the sealer.