Brendan Rodgers says he is confident his squad continue to work in a “very safe environment” amid a spike in coronavirus cases in Leicester.

Government officials have recommended the current lockdown measures remain in force in Leicester for an extra two weeks as coronavirus restrictions are set to be eased across the rest of England from Saturday.

A surge in COVID-19 cases in recent weeks in the city has led to talk the Foxes’ remaining Premier League home games, beginning with Crystal Palace on Saturday, could be moved to a neutral venue. “Nothing has changed in terms of how we have been working thus far throughout this situation,” said Rodgers, who was previewing his side’s trip to face Everton at Goodison Park on Wednesday, live on Sky Sports.

“I have always said we will react accordingly. We have to have agility in this period. I think in this moment in time we are in the safest place we can be in terms of our work, the stadium also.

“It is a very safe environment for the games to be in. We will just keep working until we are told otherwise.”

Asked whether his side would be at a disadvantage should their home games be moved away from the King Power Stadium, he added: “It is something I am not really thinking of. It is all hypothetical at the moment. We will just continue with our work.”

Rodgers: We can still achieve our target

Leicester were knocked out of the FA Cup by Chelsea in the quarter-finals on Sunday and are yet to win since the resumption of the season, but Rodgers insists his side remain in a “fantastic position” to ensure the campaign is remembered as a positive one.

“This is a team that’s a work in progress,” he said.

“This is the first little blip we’ve had for probably 14 months or so, which I can understand. It’s about a process, it always has. 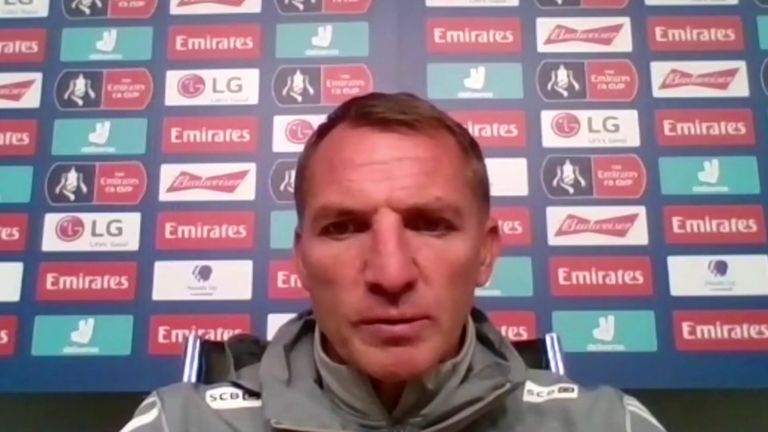 “How the players have developed I’ve been really pleased with. We would love to win a trophy and our aim this season was European football. Unfortunately, we’ll have to put the cups on hold for another season but we have given everything we can in them so that will be a learning experience for us.

“With seven games to go, we’re still in a fantastic position to achieve what we set out to achieve.

“The break has disrupted us a little bit. But I’ve got great confidence in the squad.

“There’s a lot of young players who have this expectancy now having done so well that we have to live with. But that’s okay because it means they are doing something right.”

Jamie Vardy, who remains the Premier League’s top goalscorer with 19 goals, has only scored once from open play in 2020 and Rodgers, who concedes more is required from other members of his squad, is hopeful of bolstering his attacking options this summer. “It is certainly one of the areas we have been looking at. If you look from last season to this season our objective was to score more goals and that is what we have done,” Rodgers said.

“I felt that we needed a certain number of goals if we were to challenge for European football and up to now the players have surpassed that.

Related posts:
Basketball News:
Lewis Hamilton and Valtteri Bottas free to use Mercedes DAS after Red Bull protest snubbed
F1 confirms no positive coronavirus tests ahead of Austrian GP
Manchester United vs Bournemouth predicted line-ups: Team news ahead of Premier League fixture today
MLB News:
Cleveland Indians looking to ‘determine best path forward with regard to our team name’
Five-star college basketball recruit Makur Maker chooses HBCU school over UK, UCLA
NCAA penalizes Texas A&M football program; Jimbo Fisher hit with six-month show-cause for violations
Recent Posts
This website uses cookies to improve your user experience and to provide you with advertisements that are relevant to your interests. By continuing to browse the site you are agreeing to our use of cookies.Ok