Home » Soccer » Coronavirus: Why this could be the end of Championship as we know it

It may be one of the simpler calculations that Championship clubs have to make in any given season but it is one that plenty still get wrong. “There are 24 clubs and only three go up,” says David Sharpe, the former chairman of Wigan Athletic. “The chances aren’t great, are they?”

It is now more than 18 months since Sharpe – grandson of Dave Whelan – ended his family’s 23-year ownership of his hometown club by selling to a company from Hong Kong. It was not an easy decision to make but he no longer wanted to spend any more time in this high-risk, high-reward crap-shooting casino where the prize is Premier League promotion for a select few and the rest spend millions on a seat at the table.

You might say that he got out just in time. The financial state of play in the Championship was “a broken model” before the coronavirus crisis, Sharpe says. Whenever the EFL returns to something resembling normality, it could be beyond repair. Greg Clarke, the chairman of the Football Association, spoke on Tuesday of “losing clubs and leagues” due to the effect of the virus. It is not outlandish to suggest that at least some of those clubs could be lost from the second tier. Depending how long the pandemic lasts, practically all of them are at risk.

Take Reading, for example. Last season was a largely unremarkable one at the Madejski – two permanent managers, two early cup exits and a 20th-place finish – all played out in front of the lowest average attendance since the club was playing in the third tier. It was notable for one reason, though. According to the latest set of club accounts released early on Saturday morning, for every £100 of income, Reading effectively paid £226 in wages. Even in a division as desperately profligate as this, it was a new record.

“It’s no way to run a business, but football clubs aren’t run as businesses,” says Kieran Maguire, a lecturer at the University of Liverpool and one of the country’s best-known voices on football finance. As a fan, he enjoys watching the Championship because of its unpredictability and the relatively level playing field. As an analyst, it is his favourite league to study because “every time you think you’ve seen everything, somebody comes along with something crazier than before.”

Even those who are only interested in top-flight football will know about this new phenomenon whereby Championship clubs sell their stadium back to themselves in order to comply with the EFL’s financial fair play regulations. “You’ve got various clubs selling assets to themselves at crazy prices,” says Maguire. “You’ve got Sheffield Wednesday sponsored by a taxi company that owns no taxis, which just happens to be owned by the owners. You’ve got Derby County paying £700,000 to Tom Ince’s mum as an academy scout because that doesn’t count to FFP.”

You do not even need to delve into club accounts to notice something is amiss. Take the most recent January transfer window. Only four Championship clubs spent more than £1m. Only one – Fulham, flush with parachute payments – spent more than £5m. Was this a delayed reaction to their division’s staggering wage-to-turnover ratios, hidden deep inside those accounts? “I thought nothing could be worse than Birmingham City under Harry Redknapp spending £202 on wages for every £100 of income,” Maguire says. “Along comes this Saturday and Reading.”

Reading are currently the most extreme case but they are by no means the only ones out-spending their earnings. Of the 18 clubs playing in the 2018-19 Championship to report financial results so far, 10 paid more in salaries than they earned in income. Wigan’s wage bill in the year of Sharpe’s departure was one of the division’s lowest but still represented £168 out for every £100 in. Only four clubs to have reported 2018-19 figures – Queens Park Rangers, West Bromwich Albion, Hull and Rotherham – spent below Uefa’s recommended ‘healthy’ wage-to-turnover limit of 70%. 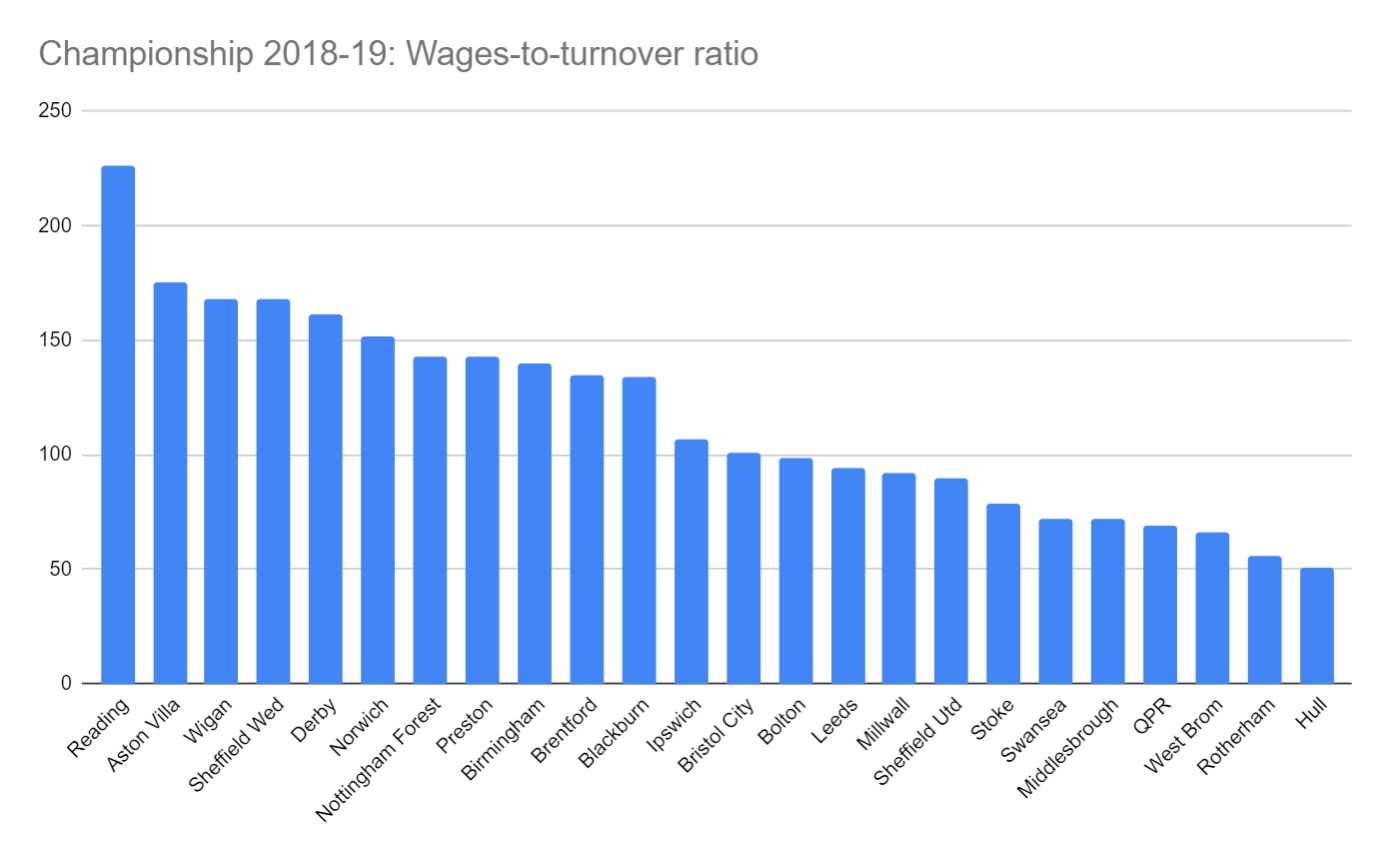 “It’s the wages,” says Sharpe, when asked for the one critical factor distorting the second tier’s financial landscape. He advocates a hard salary cap or a limit on the wages-to-turnover ratio, but the problem with any kind of wage ceiling has always been how it would incorporate clubs relegated from the Premier League who have players on expensive multi-year contracts. There is also the simple problem that many owners are happy to subsidise such huge losses, hoping that their munificence will be ultimately rewarded by promotion.

Maguire points to the tale of Tony Xia, Aston Villa’s former owner. “He was told by the Chinese government that he would no longer be allowed to get on a flight from Hong Kong to Birmingham with £200m cash in a briefcase, which he was doing on a fortnightly basis. His financial situation deteriorated and Aston Villa were within an hour of liquidation two years ago.” Villa recorded an operating loss of £84m last season, a record for a Championship club, but their numbers came up last May and they returned to the Premier League via the play-offs.

Many Championship and EFL clubs are effectively subsidised in the same way. Most are not as fortunate as Villa. Maguire picks out three recent case studies – Bury, Bolton and Notts County – which show why such a model was unsustainable even before the coronavirus crisis. “All of those were clear indications that if you have a weak balance sheet and you are dependent on one individual, if something happens to that individual and not through any fault of their own, then you are incredibly vulnerable.” Still, many are prepared to gamble and hope the dice roll their way.

This means that more cautious ones are easily accused of lacking ambition by a disgruntled fanbase. Sharpe knows all too well how a reluctance to take risks makes success on-the-pitch nearly impossible. “If you don’t try to compete with them, then ultimately you’ll have a terrible team on the pitch because you’ve got the lowest wage bill and you’re trying to run the club sensibly. You’ll just go down with a whimper,” he says. “For us there was only one solution and that was getting out.”

But in the time of Covid-19, even the most generous benefactors are likely to become selective with their spending. The crisis is not contained to football, of course. Essentially every Championship owner makes their millions elsewhere and, as Maguire points out, “they cannot justify giving a football club half a million pounds a week if their own business is not generating the money it used to in the past. You combine that with the loss of income coming into the EFL – which is more dependent on matchday income than the Premier League – and you’re heading for icebergs.”

Sharpe does not believe the pandemic should be viewed as an excuse and hopes it instead acts as a catalyst for change. “It was in a bad state regardless,” he says. “Maybe this is the wake-up call they all need. The state of each club’s losses were growing and growing. I’ve just seen Blackburn’s losses were £18m for last season. Now, there was no coronavirus last season, so we can’t all of a sudden be blaming a virus that’s stopped football for a month as the reason why Championship clubs are now under pressure to survive.”

If Sharpe was still in charge of Wigan today, he admits his priority would be his family’s long-established gym and sports retail business rather than a football club, even one he has supported since he was a boy. “The business would take priority and the staff within the business.” It is a choice he thankfully no longer has to make. But it is one that many Championship owners could be forced to consider over the coming months when faced with a significant cost base and no revenues to cover it.

The very wealthiest of them may choose to take the hit, wait it out and roll the dice once more. After all, whenever normality returns, those three Premier League promotion places will still presumably be there for the taking. But the fear for many second tier clubs post-coronavirus is that owners, investors and prospective buyers alike will look at the Championship’s relatively small revenues alongside its dizzying, uncontrollable costs and then realise that in this league, the odds are rarely in your favour.