Home » Soccer » Could Saints suffer relegation after topping the league in November?

Southampton topped the Premier League in November but are being sucked into a relegation battle after torrid run with a goal drought, injury crisis and some dodgy VAR calls… but could they REALLY go down?

‘Has a team ever been relegated after being top of the league in November? Asking for a friend.’

The tweet from Matt Le Tissier halfway through Southampton’s 1-0 loss to Everton on Monday night was tongue-in-cheek but neatly summed up that horrible nagging doubt felt by every Saints fan right now.

The feeling of euphoria when Ralph Hasenhuttl’s team briefly topped the Premier League table after a Friday night win over Newcastle United in early November has been replaced by fear and foreboding. 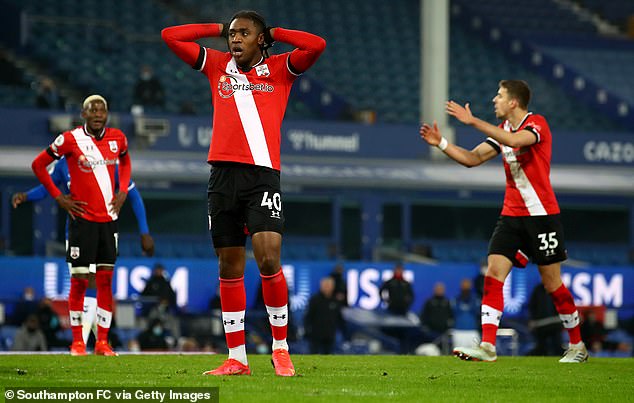 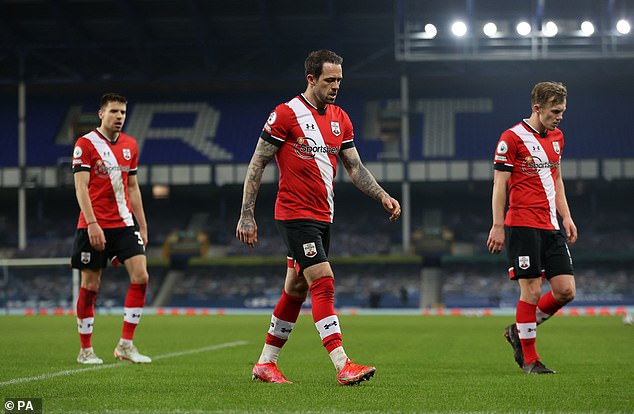 How low can Southampton go? A return of just three wins from 18 league games since that November high point, including eight losses from their last nine, sees them down in 14th.

Dreams of qualifying for the Champions League could soon be replaced by nightmares about dropping into the Championship if the tail-spin continues.

When Hasenhuttl remarked that ‘we should feel anything is possible with this team’ after that Newcastle win, being sucked into a relegation scrap presumably wasn’t what he meant.

The Saints are only seven points above 18th-placed Fulham and with confidence sapping away, a fixture list that sees Sheffield United, Manchester City, Brighton, Burnley, West Bromwich Albion and Crystal Palace up next doesn’t strike you as ideal.

Man City are striding imperiously to another title and look invincible. The others are all keeping Southampton company in the lower half of the table, all scrambling to get clear of the bottom three for good. 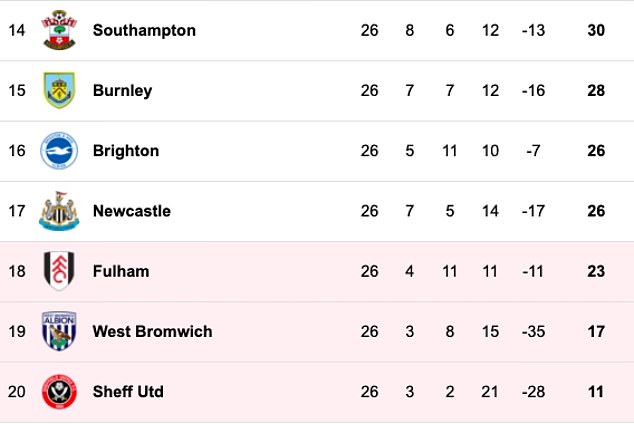 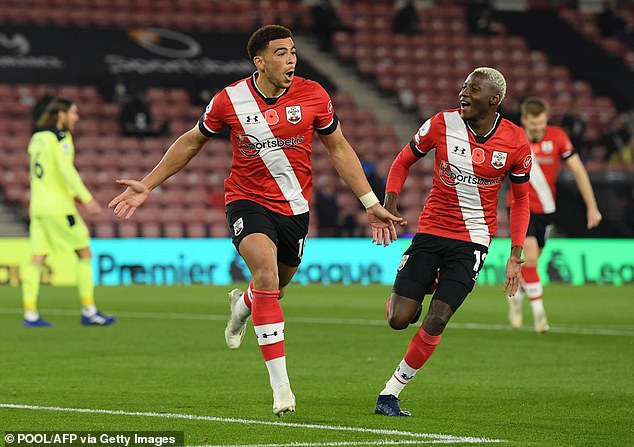 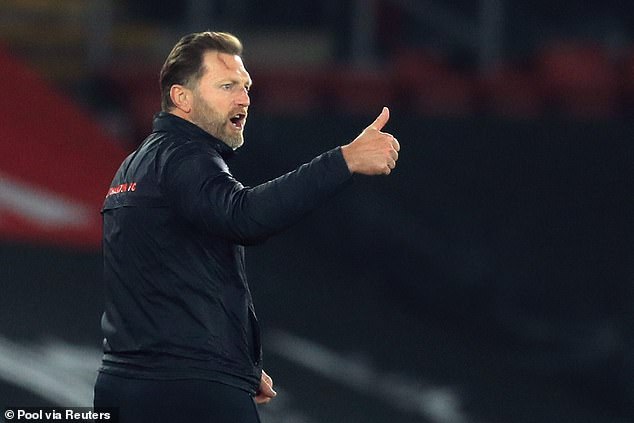 ‘Thirty points is not enough to stay in the league – we need points,’ Hasenhuttl said after a reverse at Goodison Park that at least saw a strong performance and good chances created in the second-half.

Yet Saints only mustered one shot on target all night – in the 90th minute – and therein lies one of several problems at the moment.

The goals have well and truly dried up, with a shocking return of just seven in their last 14 league games dating back to mid-December.

Their principal striker, Danny Ings, scored 25 times last season but finds himself on a barren run of just two goals in his last 13 league outings after what had been a positive start to the campaign.

Ings has suffered from a lack of service but others haven’t been able to pick up the slack. Che Adams was on target in that game with Newcastle but has scored only once since then. 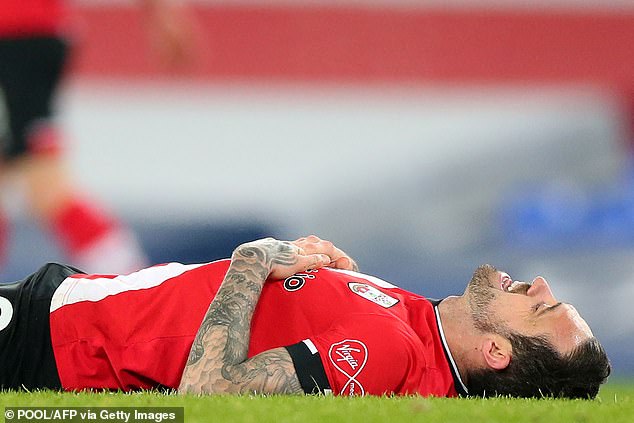 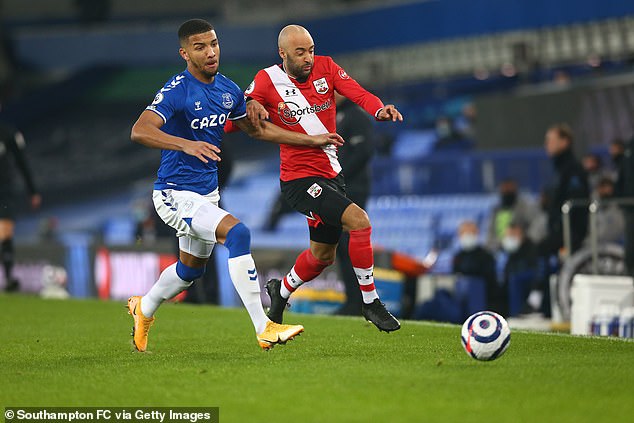 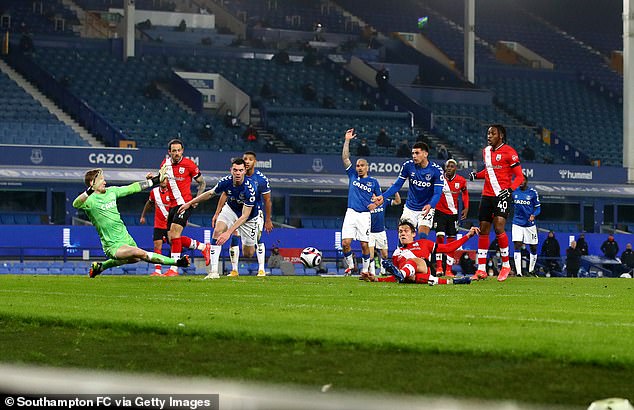 Since defeating Liverpool 1-0 on January 4, Southampton have lost eight of nine league matches

Takumi Minamino, who joined on loan from Liverpool last month, has chipped in with a couple of goals, including one against Chelsea, but the likes of Nathan Redmond and James Ward-Prowse have struggled.

Hasenhuttl acknowledged his team ‘weren’t making the best decisions’ in the final third on Monday night but there are quite a few mitigating factors as well.

Southampton have been struck by a spate of injuries as the intensity of the season catches up with them and drags them down.

Theo Walcott, likely to be sidelined for some time with a thigh injury, is the biggest loss when it comes to creativity.

Oriol Romeu will miss the remainder of the season and youngsters Michael Obafemi and Will Smallbone won’t be returning anytime soon.

Others out at the moment are Minamino, Kyle Walker-Peters and Ibrahima Diallo, meaning Southampton’s line-up at Everton featured a bench stuffed with academy graduates. 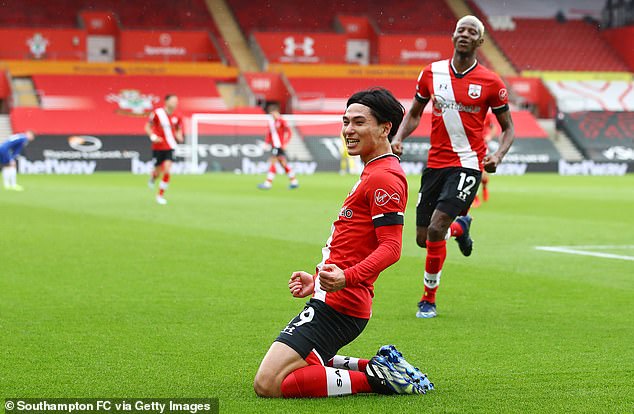 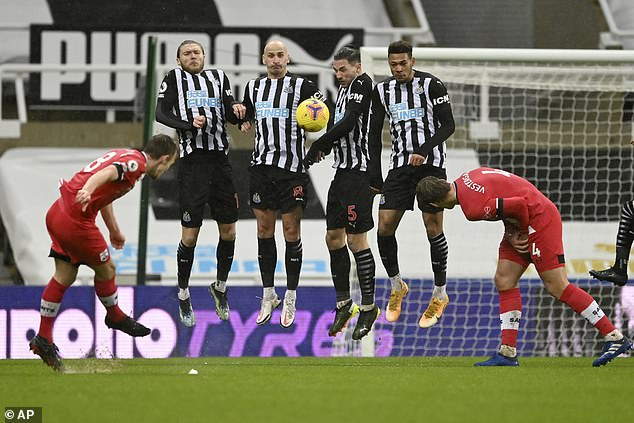 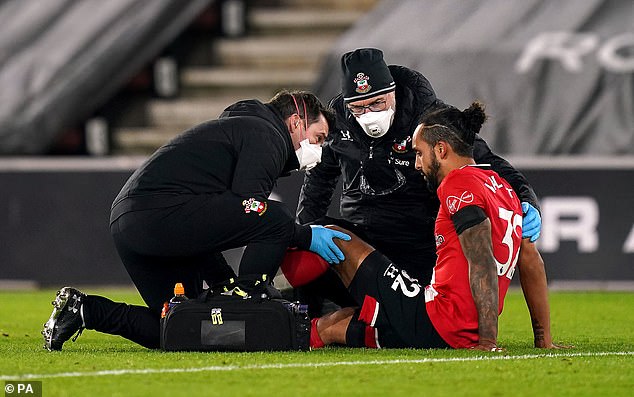 Theo Walcott is one of several injury absentees at the moment, stretching the Saints squad

Good to see, of course, but not ideal when chasing the game and there’s nobody really for the manager to turn to.

The injury crisis has meant square pegs in round holes through necessity – Stuart Armstrong, typically a creative threat in wider positions, was forced to play a more central role at Goodison.

The run of defeats looks bad but if you take some of the games and performances in isolation, the case for extenuating circumstances can be made.

In the 1-0 home defeat by Aston Villa in late January, for example, Saints were victim to two appalling refereeing decisions.

Villa’s Matty Cash clearly handled the ball inside the area but, after a VAR check, no penalty was awarded. To add further insult, Ings was denied a last-gasp equaliser by the width of his shirt sleeve. 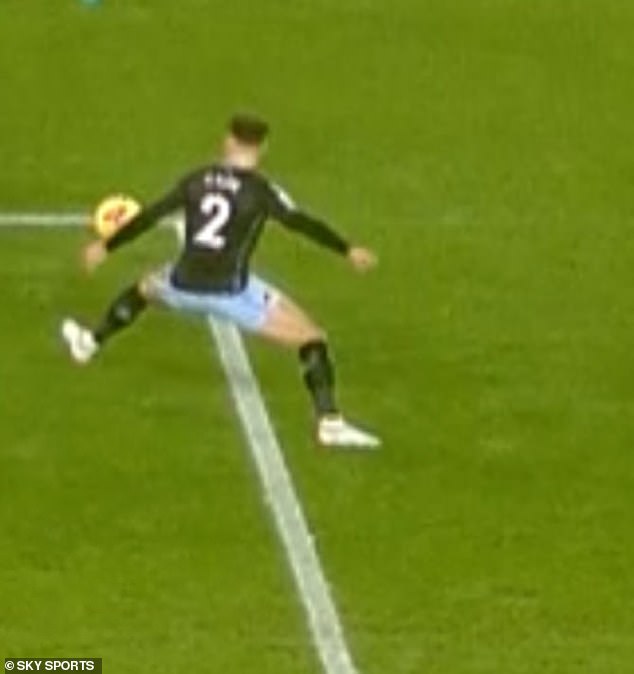 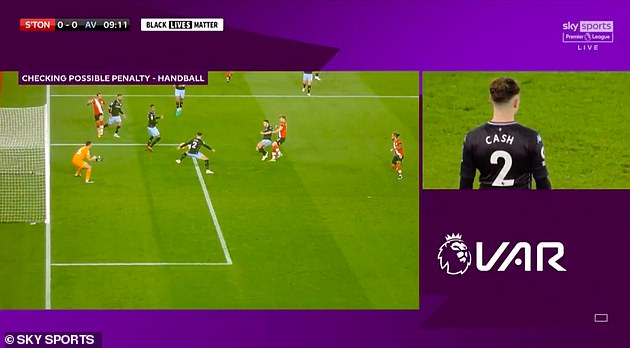 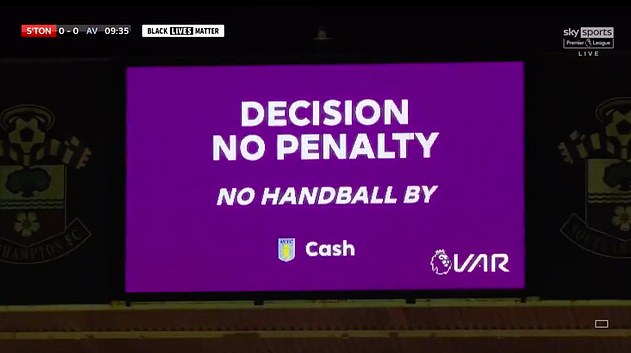 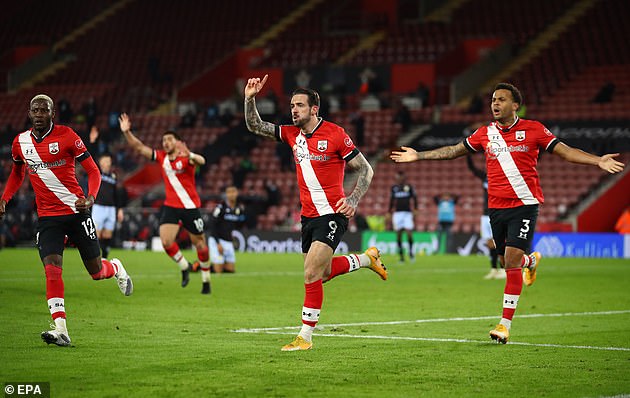 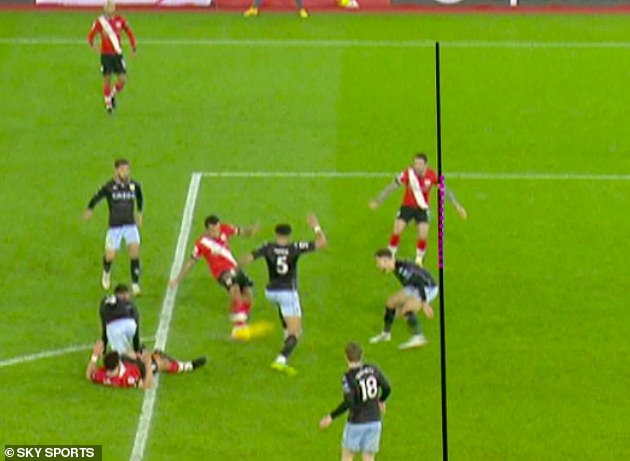 VAR replays showed that Ings’ sleeve, which is classed as a goalscoring part of the body, was fractionally beyond Matty Cash’s backside and therefore offside

In the 2-1 home defeat by Wolves, having played brilliantly in the first half, Saints fell victim to another contentious VAR decision when Ryan Bertrand was adjudged to have blocked Nelson Semedo’s cross with his arm.

They were then denied a penalty of their own by VAR when a cross appeared to strike the arm of Leander Dendoncker. ‘VAR is destroying the game,’ said an incensed Hasenhuttl.

Even the 9-0 thumping they took against Manchester United, equalling the heaviest Premier League defeat, came after Alexandre Jankewitz was sent off just two minutes in.

There could be no complaints about the referee’s decision but the early blow triggered an already depleted Saints side to completely collapse. The game plan went out the window and panic set in. 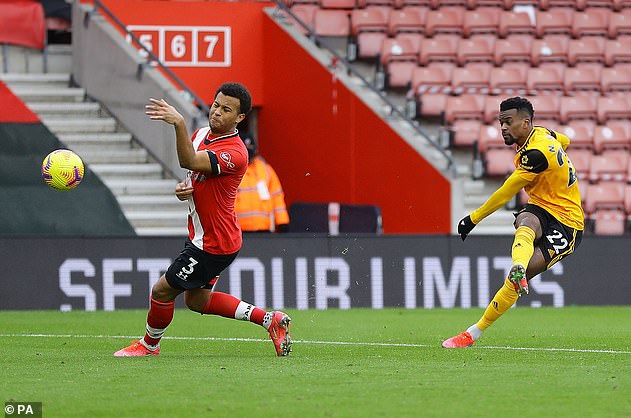 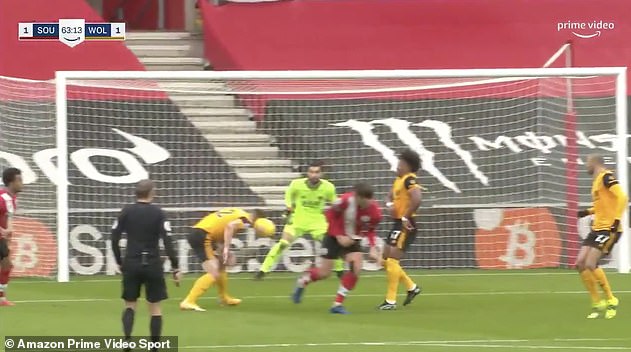 However, Leander Dendoncker was not penalised when the ball hit his arm in the box (above)

Curiously, Southampton’s shocking league form has coincided with good progress in the FA Cup. They have beaten Shrewsbury Town, Arsenal and Wolves to set up an intriguing south coast derby at Bournemouth in the quarter-finals.

It must mystify their manger how his team can produce such performances in knockout competition but fail to translate them to the league.

But the circumstances mentioned don’t fully explain the situation. In other games, Southampton have been truly risible.

They lost 3-2 to a Newcastle team last month who had won just once in 13 and navigated the final 18 minutes with nine men having played 23 minutes prior to that with 10 men. 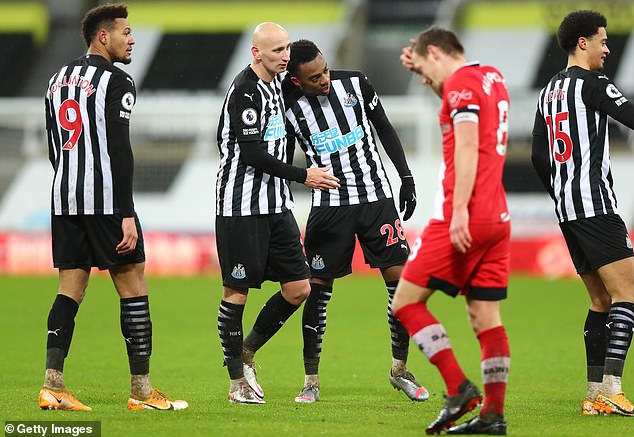 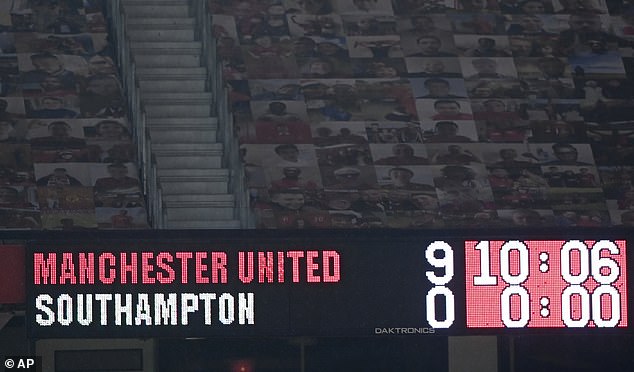 Newcastle defended their goal with increasing desperation as the minutes ticked down but somehow succeeded in keeping Southampton at bay.

It seems to be either feast or famine for Saints under Hasenhuttl. Runs of poor results have been followed by impressive rebuilds but he will start to fear for his job if this current state of affairs continues much longer.

With effective six-pointers dominating the upcoming fixtures, he must find a way of stopping this worrying slide or the piece of unwanted history Le Tissier joked about might become an embarrassing reality.