David Moyes called for West Ham to keep calm and carry on as their European conquest gathered pace.

The Hammers continued their cruise through the continent with a thumping 3-0 win over Belgian side Genk.

Goals from Craig Dawson, Issa Diop and Jarrod Bowen made it three wins out of three for the Hammers in their maiden Europa League group campaign and kept them firmly on course for the knockout stages. 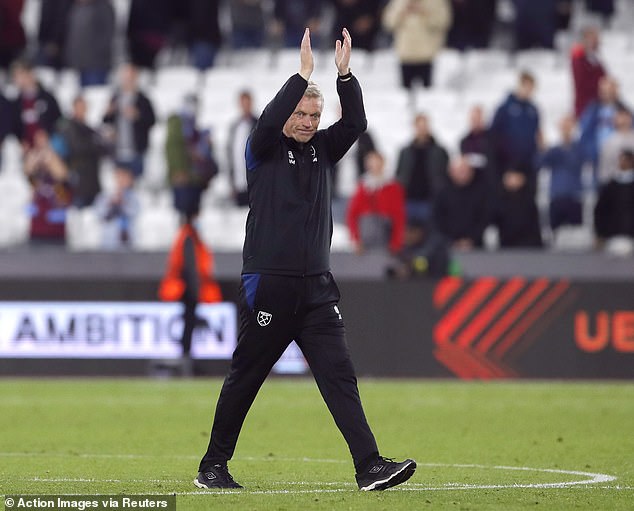 West Ham are already six points clear at the top of Group H and could even secure qualification as group winners in their next match, in Genk in a fortnight, with two games to spare.

But Moyes said: ‘I’m keeping relatively calm because we’ve got to go to Genk away and (Rapid) Vienna away. I’m not going to take anything for granted.

‘I said before I want to be in Europe after Christmas. That’s my plan for this year. The players have done a brilliant job. They really have.

‘We’ve not won any of them easily. They’ve all been tough. The games have been close, even though we’ve been the better team in all three of the games. 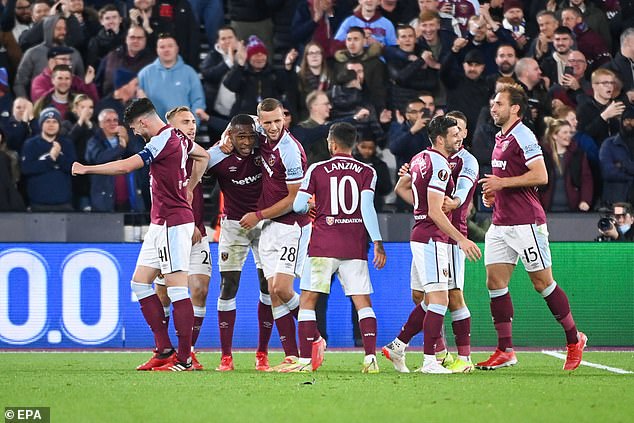 ‘We’ve got to keep working to get those extra points to make sure we qualify.

‘I expect to win the games, but because we’re new to it I’m really pleased with the way the players have gone about it.

‘Now we have to go away to Genk and in Europe you have to play well away from home. I hope we can take our Premier League away form into Europe.’

Aaron Cresswell swung in a corner and centre-half Dawson rose highest to steer the ball home off his shoulder. 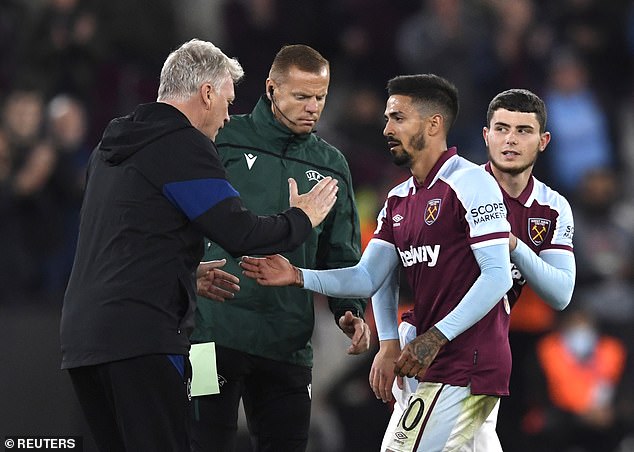 West Ham have become set-piece specialists under Moyes and they were at it again at the start of the second half, Dawson’s defensive partner Diop heading home at the near post from Cresswell’s free-kick.

Moments later the hosts stole possession near the halfway line and Bowen galloped forward before firing home a fine solo goal to wrap up the victory.

Tomas Soucek played despite needing plastic surgery on some horrific facial injuries earlier in the week, having been caught by a stray boot against Everton on Sunday.

The Czech midfielder said: ‘The doctor did a great job and I am happy that everything went well.

‘I had many stitches but still I was ready to play and I could play like normal.’

Genk boss John Van Den Brom said: ‘I thought it was 50-50 in the first half so it was disappointing to let in a goal at the end, just before half-time. Mentally it’s hard for the guys.’ 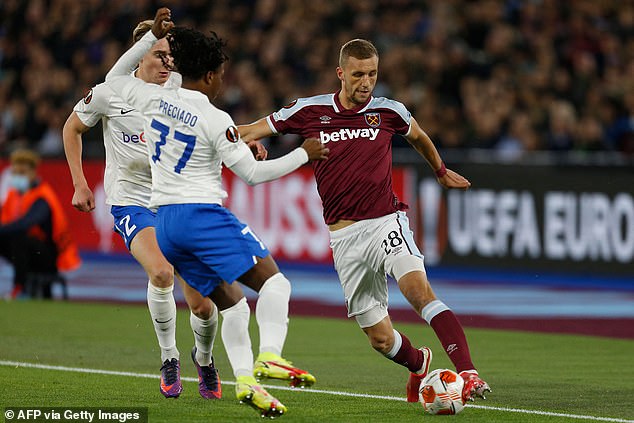