Report and highlights from the Sky Bet Championship clash between Derby County and Swansea at Pride Park as Colin Kazim-Richards and Kamil Jozwiak fired the Rams to victory under Wayne Rooney on Wednesday night.

Derby celebrated a first home victory in the Championship since June as they beat Swansea 2-0 on Wednesday night.

It was also the first time this season that Derby had scored twice in a game and stretched their unbeaten run to six matches since Wayne Rooney became interim manager.

Colin Kazim-Richards gave the hosts the perfect start after such a barren run at home by scoring inside five minutes and Swansea never recovered from that early setback.

It was no more than Derby deserved when Poland winger Kamil Jozwiak finished impressively for his first goal for the club and only the crossbar denied Kazim-Richards a second just before half-time. 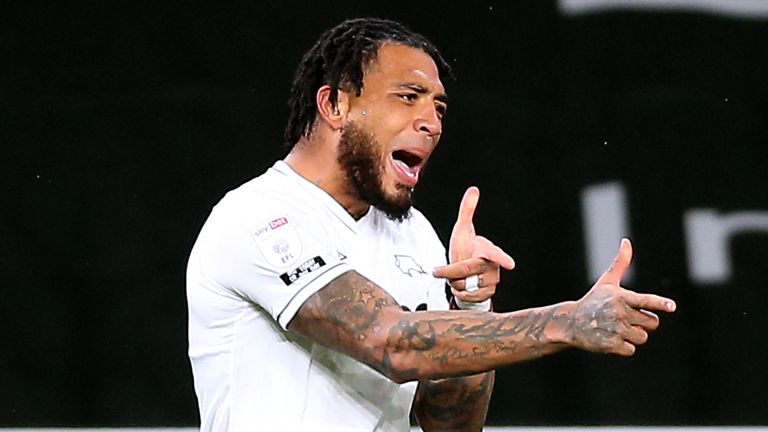 Swansea were better in the second half but failed to create a clear chance and missed the opportunity to move into the top three while Derby, who stay in the bottom three on goal difference, kept a clean sheet for the fourth consecutive game.

Derby began the evening having scored only eight goals in 18 Championship games but they were ahead in the fourth minute.

A Graeme Shinnie free-kick was knocked down by Lee Buchanan and Kazim-Richards reacted before anyone else to stab a shot past Freddie Woodman from eight yards.

Kazim-Richards had a header blocked as Derby’s confidence grew and they were close to a second in the 19th minute when Jason Knight’s 20-yard shot was touched onto a post by Woodman.

Swansea did not pose a threat in the opening 30 minutes but Andre Ayew did have an attempt on goal two minutes later but it went harmlessly wide.

Derby had been quicker to the ball and they deservedly scored again in the 37th minute when Jozwiak lashed in a shot from just inside the box after Martyn Waghorn laid the ball into his path.

Swansea were lucky not to concede again in stoppage-time when Kazim-Richards thumped a header against the crossbar from a corner.

It was no surprise when Swansea made three changes for the second half and they showed more urgency without seriously threatening Derby’s goal.

The game was held up for several minutes after a clash of heads between Buchanan and Ayew but – after treatment – both players were cleared to continue.

Although Swansea had improved, they had not seriously troubled Derby’s defence which had been shielded by the impressive Krystian Bielik.

David Marshall twice had to come out and punch clear but he had not been called on to make a save of note with Derby looking comfortable as the clock ticked down.

Derby’s interim boss Wayne Rooney: “There’s a lot of games left and I’m very confident we will not be there (in the bottom three) at the end of the season. It’s not nice to be down there but we need to get our attention and focus on moving higher up the table because we are better than where we are – I think everyone can see that.

“In the last month there have been so many positives and I think if we keep putting the work in and showing the moments of quality and class we’ve got, then I’ve no doubt we’ll move out. It’s a big win for us. Swansea are a very good team so to beat them at home shows where the players are at. They have been getting more confident with each game and tonight was a very good performance.”

Swansea’s Steve Cooper: “It’s really disappointing. From the first minute we didn’t do things right, didn’t start the game well. We never really got a foothold in the game by doing the non-negotiables of attacking and defending and because of that, we found ourselves 2-0 down and in the end we gave ourselves too much to do.

“It shows that if you don’t do things properly you can get punished and on the basics of defending, we fell short on both goals. We had to go chasing the game a bit second half but it was just a poor night in every sense of the performance and it’s one that’s really disappointing. The players know, I know and we have to quickly address it and get ready for the next one.”