Brentford’s automatic promotion hopes suffered a blow when they squandered a two-goal lead as Derby hit back to earn a 2-2 draw at Pride Park.

Brentford were coasting after dominating the first half to lead through an Ivan Toney penalty and a Sergi Canos strike.

But Derby were transformed after the break and reduced the arrears through Lee Gregory before fellow half-time substitute Louis Sibley curled in a superb equaliser with three minutes remaining.

It was a spirited comeback from Derby, who had failed to score in their previous four games, but Brentford will be bitterly disappointed with the way they allowed two points to slip from their grasp. 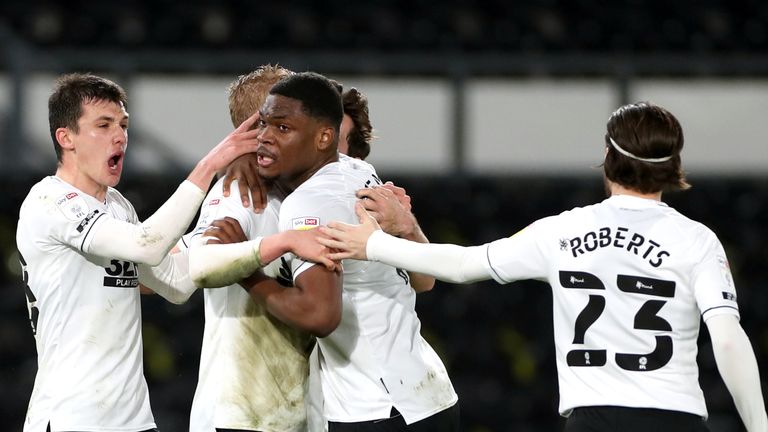 The teams shared a goalless draw in December but Brentford struck early this time with Toney again on the scoresheet.

A poor pass from Andre Wisdom led to Lee Buchanan tripping Bryan Mbeumo and Toney sent Kelle Roos the wrong way with the eighth-minute spot-kick for his 27th Championship goal of the season.

Brentford should have made it two seven minutes later when Mathias Jensen played in Mbeumo but he dragged his shot wide from 10 yards with only Roos to beat.

Roos clawed out a Toney volley as Derby were opened up again but the goal Brentford were threatening arrived in the 23rd minute. Derby were caught on the break and Mbeumo released Canos, who cut inside before firing low past Roos from just inside the area.

It was no more than Brentford deserved for the quality of their movement and passing which left Derby chasing the game.

Toney was ready to pounce at the back post in the 39th minute but Wisdom made a vital interception to at least give Derby some hope in the second half.

Wayne Rooney made three changes at half-time and his team was transformed, reducing the deficit within two minutes of the restart. Nathan Byrne got behind Brentford on the right and crossed low to the back post where Gregory tapped in.

There was a better tempo and intensity about Derby as Brentford looked ruffled for the first time and they almost equalised in the 58th minute. Brentford failed to clear a corner and Gregory’s volley was well saved by David Raya, but the momentum had swung towards Derby.

They lost Colin Kazim-Richards with an injury but they levelled three minutes from time with a quality strike from Sibley, who curled a left-foot shot into the top-right corner from just inside the box to earn his side a point which edges them towards safety.