Duke opened the scoring on the stroke of half-time, soothing the frustrations of fuming Wanderers fans who had seen three earlier goals ruled out for extremely marginal offsides – two involving unwelcome interventions from the Video Assistant Referee. 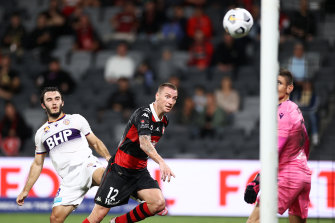 From there, Western Sydney added two more through Duke and James Troisi inside the first five minutes of the second half to complete arguably their finest performance yet under coach Carl Robinson.

They remain in second place on the ladder, but this result brings them to within three points of A-League leaders Central Coast Mariners, who face red-hot Melbourne City away on Monday night.

Duke, who returned to his home-town club on loan from Saudi Arabian club Al-Taawoun last month, now has four goals from six appearances this season and an overall tally of 22 in 43 games for the Wanderers.

He bounced high in the air to meet a terrific cross from Troisi to score his first, while for his second, he latched onto a long diagonal ball and easily outpointed Glory rookie Luke Bodnar in a one-on-one battle.

The fringe Socceroo nearly had a hat-trick but couldn’t find an empty net from an acute angle. He was withdrawn in the 67th minute to rapturous applause at Bankwest Stadium. 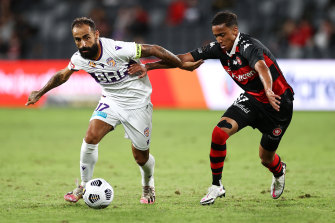 The Wanderers were grateful for the VAR earlier in the week when Tomer Hemed was denied a dramatic injury-time equaliser for Wellington Phoenix by a controversially tight offside decision.

It wasn’t all bad for them on Friday night. VAR operator Craig Zetter awarded Troisi his 50th-minute goal, which was initially disallowed as the linesman wrongly flagged Bernie Ibini for a breach in build-up play, as replays proved.

Ibini himself could have had a hat-trick. He had an early attempt saved by Liam Reddy, and then saw two other goals disallowed for marginal offsides, one of which involved the VAR.

Daniel Wilmering was also denied a goal by the VAR, but all three were, technically, offside – at least according to the line drawn by the technology.

Wanderers fans, however, will argue that two of them were not “clear and obvious” errors and shouldn’t have involved the VAR, and they may have a fair point.

On this occasion, it didn’t cost them, as Robinson’s men were able to expose the Glory’s defensive frailties with consummate ease.

The visitors had a couple of long-range lashes at goal in the opening minutes and only started troubling Western Sydney again when the result was already locked away.

In the end, the final margin was flattering to them, and Perth now have the competition’s second-worst defensive record – better only than Melbourne Victory, who have played one more match.