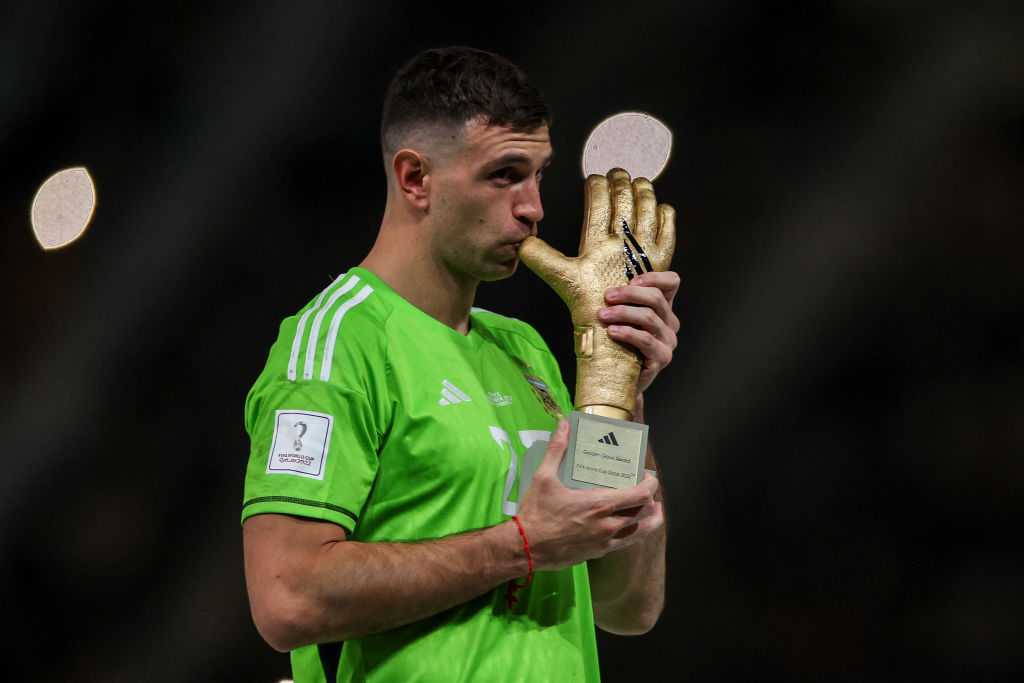 Emiliano Martinez has been accused of ‘cheating’ during Argentina’s World Cup final victory over France.

Argentina became three-time world champions on Sunday after beating France 4-2 on penalties in one of the greatest World Cup finals in history.

Messi scored his seventh goal of the tournament in extra-time but penalties were required to separate the sides after Mbappe completed only the second hat-trick in a World Cup final.

Martinez has a superb record in shootouts and emerged as Argentina’s hero as he saved Kingsley Coman’s effort and appeared to put off Aurelien Tchouameni before the Real Madrid midfield fired wide.

The Aston Villa goalkeeper’s antics in the penalty shootout have divided opinion, with some praising his desire to win at all costs and others suggesting it was gamesmanship.

But former Crystal Palace chairman Simon Jordan believes his behaviour went beyond gamesmanship and was in fact a form of ‘cheating’.

Before Tchouameni stepped up, Martinez held onto the ball and threw it away from the penalty spot. He then tried to approach France’s next penalty taker Randal Kolo Muani, receiving a yellow card from the referee.

‘Martinez’s actions, I thought it was cheating, the holding of the ball and throwing it the other way,’ Jordan said on talkSPORT.

‘For a referee to allow the goalkeeper to manipulate the circumstances, to heighten the pressure, to increase it, I think was one of the shortcomings in that moment in time.’

Martinez spent almost a decade at Arsenal but only made 38 appearances for the Gunners before joining fellow Premier League club Aston Villa in 2020.

His former Arsenal team-mate Jack Wilshere was delighted to see him lift the World Cup, telling The Sun: ‘I was watching [the final] it with my Arsenal coaching staff and we were all up and down like yo-yos.

‘I’m not going quite as far as to say I was crying when that final whistle went – but I just might have done if Lionel Messi had lost.

‘And to make the occasion absolutely perfect, there was my old Gunners pal Emi Martinez standing alongside him as a world champion, and after having performed so magnificently.

‘To watch Emi do what he’s done has been amazing. To have seen him as a 17-year-old kid at Arsenal, who went out on loan to the likes of Oxford, Rotherham and Sheffield Wednesday, to now be a World Cup winner.

‘I’m so happy for him. He made one of the best and most important saves ever in a World Cup final – that stop with his boot from Randal Kolo Muani right at the end of extra-time to get them to penalties.

‘Seriously, that save has helped Messi to the prize we all so wanted for him and that he wanted more than anything.

‘Then Emi saves Kingsley Coman’s shootout kick – and messes with Aurelien Tchouameni’s head for him to miss.

‘He has an immense presence in goal. The target just gets smaller and smaller when he’s in it and I actually thought he would save one of Mbappe’s penalties before the shootout. He certainly came very close to it.

‘For him to win the Golden Glove as the best keeper – and the World Cup itself – is off the scale. It just shows why you should never give up in life.

‘He couldn’t get what he wanted, to be the first-team keeper at Arsenal, but now he’s on top of the world.’

Martinez capped a superb World Cup campaign by winning the Golden Glove award, while Messi received the Golden Ball trophy for the best player in Qatar.