Emma Hayes emerged from the tunnel, in the shadow of her Chelsea players, and immediately retrieved a woolly hat.

She dragged it over her ears and, with a snood covering her nose and mouth, took a seat among a row of quilted jackets and skin-tight tracksuits.

But any hopes the Chelsea boss held of sneaking out of the spotlight were always in vain. 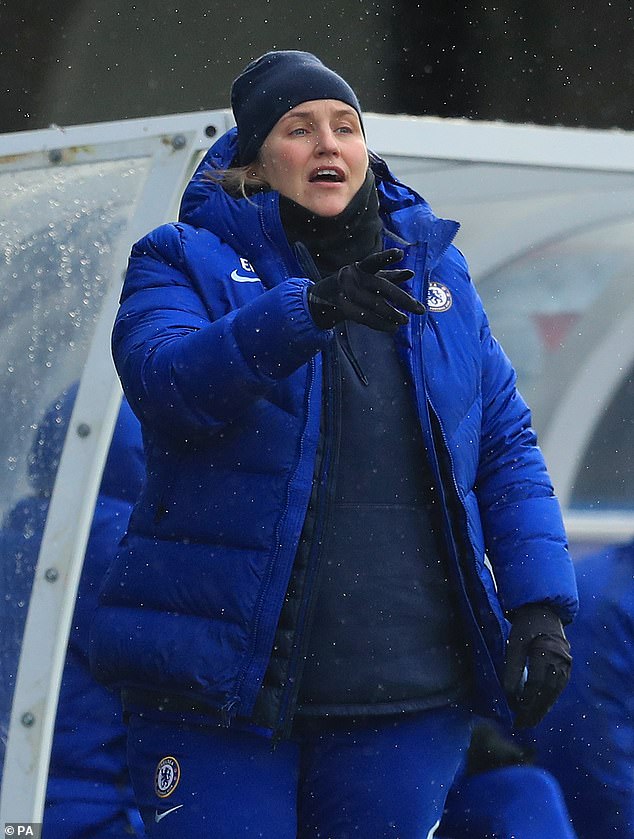 Not after this week. What started with tentative reports linking her with AFC Wimbledon spiralled into a ferocious debate about the standing of women’s football — and the treatment of one of its crown jewels. This match ensured a stormy few days ended with no little bang, either.

The glass ceiling in the men’s game remains pristine, but Chelsea’s record-breaking unbeaten run has been shattered. After 33 WSL matches without defeat — and 14 consecutive home wins — they were undone by a side that had lost five of their past six games.

This, Brighton’s first win since November, came with no small slice of luck. But it was built on dogged defending and unyielding spirit. 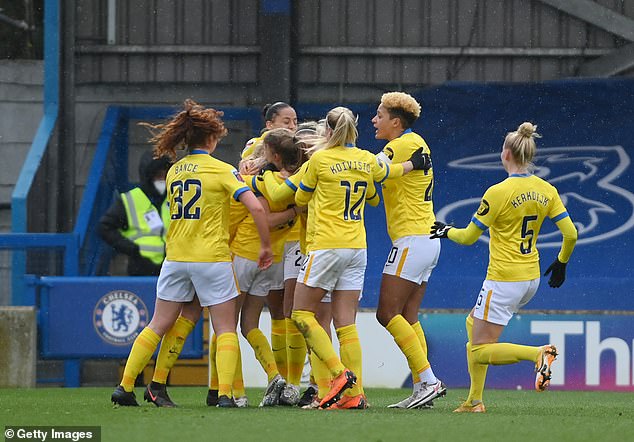 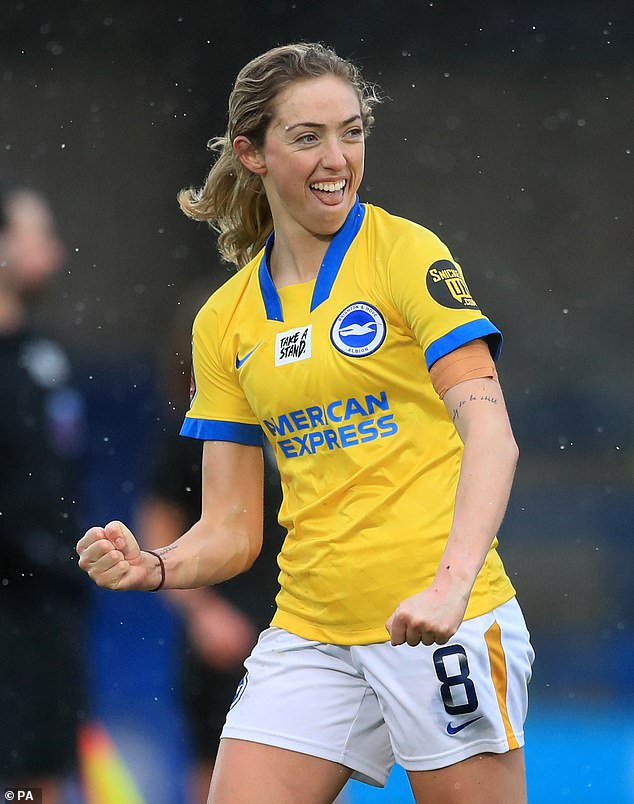 Megan Connolly netted the winner 12 minutes from time, when her corner flew all the way in. Earlier, Sam Kerr had given Chelsea the perfect start, only for Aileen Whelan to equalise minutes later.

Only time will tell how vital this could prove in Chelsea’s push to retain the league and Brighton’s battle to stay in it.

‘An insult’ was Hayes’ verdict on suggestions that swapping a potential quadruple for League One represented a step up.

It was nevertheless testament to her achievements that she was being tipped to become the first woman to manage a professional men’s team in English football.

But if Chelsea’s performances earned those plaudits, this result illustrated how quickly standards can drop.

‘It wasn’t good enough from us on any level,’ Hayes said.

‘This serves as a reminder that no one is invincible.’

‘You have to get beaten at some point,’ she added, refusing to blame this week’s circus. ‘We’ve had a lot of good days. This is a bad result, it’s not the end of the world.’ 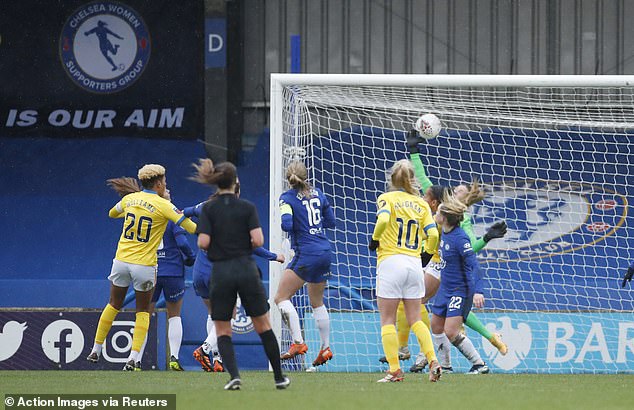 Connolly netted the winner 12 minutes from time, when her corner flew all the way in (above) 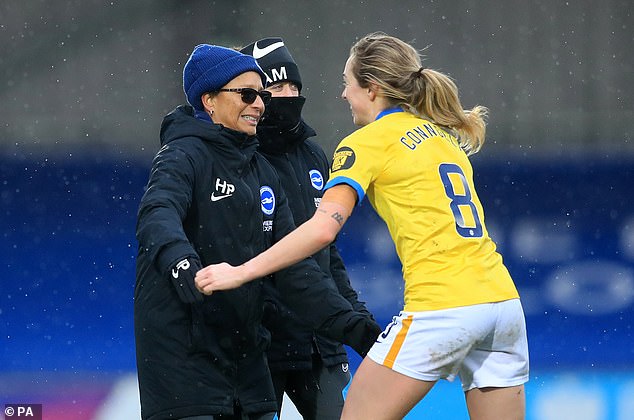 Chelsea managed 30 shots to Brighton’s three, not that the visitors will care one jot.

‘I think the celebrations will go on for a bit of time,’ manager Hope Powell said. ‘It had to end for them sometime. I’m really glad it was us.’

Swirling winds and relentless snow made for tough conditions but the pitch held up brilliantly. Chelsea have made this place so inhospitable to visitors that everyone and everything struggles to settle. Yet Brighton played with a character which belied recent history — at least from minute five onwards.

Chelsea were immediately on the front foot. From a corner, Kerr rose highest and sent a header in off the bar. Three minutes later, however, Wheelan responded in kind. It was the first sniff that something could be amiss. And even though Chelsea dominated the ball and chances thereafter, Brighton would not crumble.

A first defeat since September will not undo all the good work Hayes has amassed in these parts.

It will not stop her being wanted elsewhere — be it step up or step down.

But what of the impact it could have on Chelsea’s push for more honours this season?

Perhaps that is where she — and her players — will show what they are really made of.

1 Two teams hit hardest hit by the pandemic are fourth-tier Southampton and third-tier Watford, who have invested heavily, improved a lot, yet face their divisions being abandoned for a second successive year. FA head of women’s football Baroness Sue Campbell said: ‘We have to look at how we ensure those clubs with ambition are not left one more year in a stagnant league where everything is null and void.’

2 The FA have no immediate plans to open up the WSL to new teams, despite clubs investing heavily and knocking on the door. There is a need to protect less well-resourced sides, whose parent clubs are currently struggling. ‘The question is how fast you can move this without damaging some of the clubs that are already in there,’ said Baroness Campbell.

Two or three-team promotion and relegation is a possibility — but only when the women’s game is less fragile.

3 Former Norway star Hege Riise, England’s temporary coach, may well manage the Team GB side at this summer’s Tokyo Olympics. But she will have her work cut to eclipse the USA in the heat and humidity of Japan.

The USA have already been training for six weeks and have the SheBelieves Cup to help them prepare. The 18-strong Team GB will have had just one preparation game and two training camps.

4 A momentous week for Arsenal after Sunday’s defeat by Manchester City. Another loss at Chelsea on Wednesday would seem incontrovertible evidence that the club, who have won 15 league titles, 14 FA Cups and a Champions League, are being left behind.

5 In last Monday’s column, it stated that Arsenal Women’s game against Aston Villa Women had been due to be played at Borehamwood but was called off because of a waterlogged pitch.

In fact, the game was scheduled to be a home fixture for Aston Villa.

By Kathryn Batte and Ian Herbert