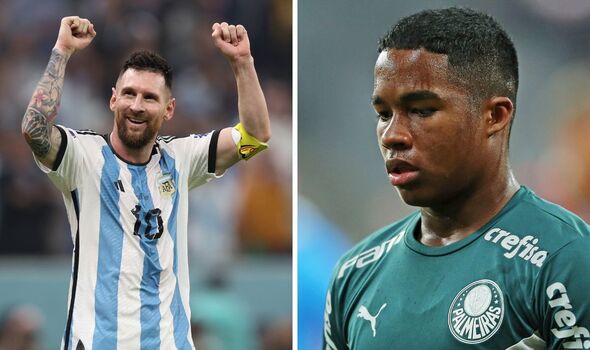 Brazilian wonderkid Endrick was forced to delete his tweet lauding Lionel Messi after being subjected to abuse by Real Madrid supporters. The 16-year-old star-in-the-making looks set to seal a switch to Los Blancos in a £62million deal that will be formally completed when the forward turns 18.

Carlo Ancelotti’s side are now tying up the loose ends of negotiations as the European champions look set to pip the likes of Chelsea and Paris Saint-Germain to the teenage sensation.

But even though Endrick is still yet to sign on the dotted line, he has already gone down in the estimations of Real Madrid supporters after declaring his admiration for Messi.

The Barcelona icon turned on the style on Tuesday night for Argentina as they thumped Croatia 3-0 to reach the World Cup final.

Messi was in mesmerising form as he tormented the Croatia defence, scoring once before teeing up Manchester City forward Julian Alvarez for his second of the match.

The 35-year-old teased arguably the defender of the tournament Josko Gvardiol before skinning the centre-back and cutting the ball back for Alvarez to slot home.

It prompted Endrick to tweet: “Messi is absurd man.”

Yet following a barrage of abuse – which included sickening racial slurs – Endrick took down the post which is no longer visible on his profile.

Some Real Madrid fans even ordered their beloved club to cancel the deal, as they took offence to Endrick’s admiration for Messi.

Brazil fans were also left furious by the tweet, which clocked up 132,000 likes before being deleted.

To make matters worse for Endrick, Argentina’s players began to taunt Brazil in the dressing room after their victory with a song that mocked their rivals’ exit.

Messi and Co were recorded chanting: “Brazilian what happened, wrinkled the five-time champion.

“Messi left for Rio and stayed with the cup. We are the Argentine band and we will always encourage.

“Because we have the dream of becoming world champion. I’m like that, I’m Argentine, f****** English from Malvinas I don’t forget.

Endrick looks set to seal his move to Real Madrid in the summer of 2024 – meaning he faces an 18-month wait before starting his new challenge in the Spanish capital.

It appears he may now have gotten off on the wrong foot with Los Blancos supporters as he seeks to build a relationship with his future fans.