Manchester United manager Ole Gunnar Solskjaer says Eric Bailly has been training and could play against West Brom in the Premier League on Sunday, but Paul Pogba remains injured.

United defender Bailly has not featured since a 2-1 victory at Fulham on January 20 due to a couple of minor injury setbacks but has given Solskjaer a boost as his side look to continue their unbeaten away record in the league.

Paul Pogba remains out after the midfielder sustained a thigh injury in last week’s 3-3 draw with Everton and centre-back Phil Jones is still absent as he continues to recover from a long-term issue.

United’s players have had a chance to recuperate following Tuesday’s 1-0 FA Cup win over West Ham and Solskjaer has welcomed the extra time between matches.

“We’ve had a rare opportunity to do a little bit of training and actually some recovery,” the United boss said ahead of Sunday’s trip to The Hawthorns, live on Sky Sports.

“You’ve got Wednesday, Thursday, Friday, Saturday and then not a game until Sunday, so that’s been a rarity for us really.

“But Paul is still out. Eric’s been training so that’s a boost for us.”

Speaking to MUTV, Solskjaer added: “Eric is available. He has trained for a couple of days so he’ll be available for selection.”

Forward Shola Shoretire, 17, has been promoted to the first-team squad this week, with 18-year-old midfielder Hannibal Mejbri set to join him.

Shoretire signed his first professional contract with United on Monday and has been with the club since the age of nine. The news capped a productive week for the teenager, who scored a hat-trick in United U23s’ 6-4 win over Blackburn last Friday. 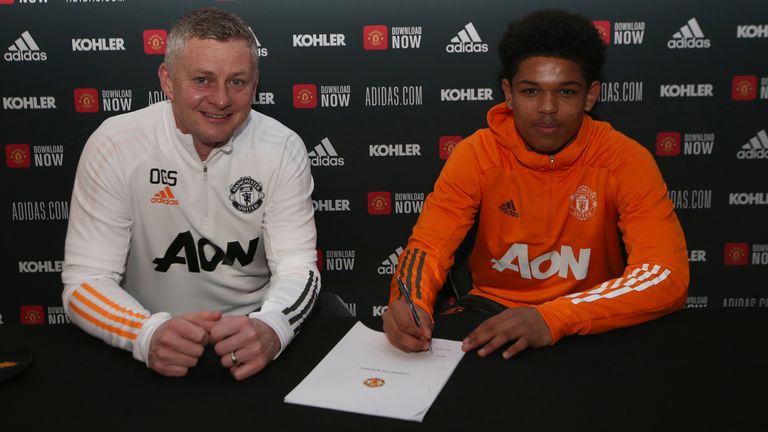 “The young kids – we’ve moved Shola up with us,” Solskjaer said. “Hannibal will join us and we’ll keep them with us for a while. “I think it’s the next step in their development.

“We’ve just got to take the hit on them when they play in the reserves that they have to travel by themselves, so they move into our bubble and I think that’s a nice step for them. Well deserved because they’ve done really well.”

Ole: We must return to winning ways

Sunday’s trip to The Hawthorns could see Solskjaer’s men complete the double over West Brom this season, following a narrow 1-0 win at Old Trafford in November when a Bruno Fernandes penalty separated the two sides.

West Brom are currently 19th in the table and have conceded 19 goals in their past five home games under Sam Allardyce, while second-placed United have netted 12 times in their previous two Premier League matches.

However, United have won just one of their past four league encounters and are five points off leaders Manchester City.

“That’s what we want to do and that’s what we’re here to do. Sunday is a big one for us in that respect, to get back to winning ways.

“The two points dropped against Everton was disappointing when it’s the last kick of the ball, but we bounced back really well in the cup against West Ham – we’re through, we’re in the quarters – and that was a step in the right direction. Another clean sheet.”