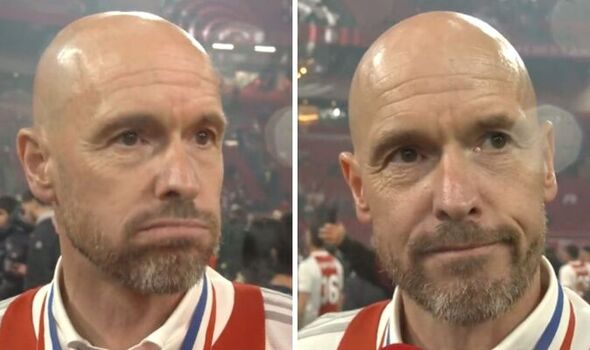 Manchester United’s new manager Erik ten Hag conceded that it’s “difficult” to say goodbye to the people he leaves behind at Ajax as he prepares to embark on his exciting Old Trafford adventure. The 52-year-old tactician cemented his legacy as an Amsterdam great by securing the third Eredivisie title of his era on Wednesday night as his side thrashed Heerenveen 5-0 to be crowned Dutch champions.

And while the party was only just getting started, Ten Hag conceded that leaving the club and saying goodbye isn’t as straightforward as it seems.

When quizzed on his emotions following his final home match, he said: “At some point, that feeling [sadness] does come into play, indeed.

“It is also difficult because I have worked with so many fantastic people here, especially the players. But there is also a time to go.”

Ten Hag was tossed into the air by his players after masterminding the club’s 36th league title, pipping rivals PSV Eindhoven in the process.

The future United boss was certainly feeling the love as the interviewer told him that everybody at Ajax was “very grateful” for the work he’s carried out at the club.

He added: “I hope so, I definitely feel it and I am very proud of what we did together.

“Ajax is Europe proof again and Ajax plays for titles. There is great foundations to build further upon.”

“This gives an incredible feeling of satisfaction. We have put in so much work together. The team has worked hard and stayed together despite a lot of setbacks.”

A potentially stunning and historic season was jeopardised by two below-par performances from Ajax in Europe and the KNVB Cup final.

After winning all six of their Champions League group matches, Ajax were beaten 1-0 by Benfica in the Round of 16 second leg – dumping them out of the competition.

Ajax had also led PSV 1-0 at half-time of the Dutch Cup final before two goals in two minutes saw their rivals lift the trophy in Rotterdam.

Ten Hag and his players were also faced with weeks of intensive speculation following the manager’s interview with Manchester United.

The development was widely reported in the media but still, Ajax and Ten Hag refused to acknowledge that talks with United had taken place.

However, a formal announcement from United unveiling Ten Hag as their new boss enabled Ajax to focus on their pursuit of the Eredivisie title.

They did not disappoint, motoring on to build a five-point advantage over Roger Schmidt’s side.

Ajax travel to Vitesse on Sunday for the final game of Ten Hag’s reign, as he bids to sign off in style before joining up with United for pre-season.