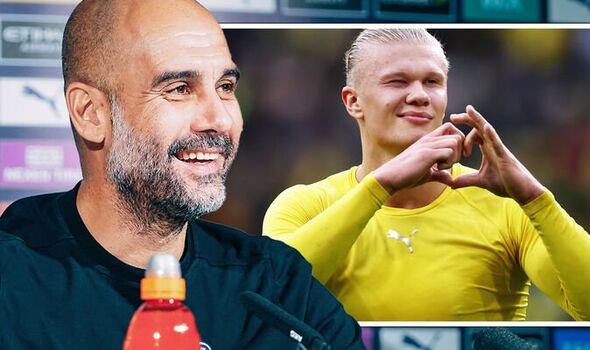 Manchester City have confirmed the blockbuster £64million transfer of Erling Haaland from Borussia Dortmund, taking Pep Guardiola’s spending above a whopping £1billion. The goalscoring ace will join the Premier League leaders ahead of next season, with City having won a strongly-contested battle to secure the Norwegian’s signature.

Haaland is believed to have signed a five-year deal worth around £350,000 per week, taking him to the same figure as City star Kevin de Bruyne. He completed a medical in Belgium alongside City staff on Monday.

City informed Dortmund earlier this week that they intended to meet Haaland’s release clause, which is widely understood to have stood at around a bargain £64m. However, intermediary fees and an astronomical contract will see the reigning champions spend far more than that figure.

The Etihad Stadium outfit have won a race against the likes of Barcelona and Real Madrid to sign the 21-year-old. Madrid were the initial favourites to buy Haaland but have instead prioritised a free transfer for Paris Saint-Germain’s Kylian Mbappe.

Signing Haaland will end boss Guardiola’s quest to sign a centre-forward. City failed in a bid to acquire Harry Kane from Tottenham last year and have played for the majority of the season without a recognised striker.

The deal also takes City’s spending above £1bn in the six years that Guardiola has been head coach. The Spaniard has indeed met the expectations prompted by such vast spending with plenty of success.

Haaland’s form with Dortmund means City have signed the hottest prospect in world football. The hotshot, whose father Alf-Inge played for the club, has scored 85 goals in 88 appearances since signing in January 2020.

An impressive record of 28 goals in 29 games across all competitions this season has come in spite of several injuries. He is set to play his final game for Dortmund on Saturday when the Bundesliga outfit host Hertha Berlin.

Guardiola revealed on Friday that he had been ordered to not discuss Haaland’s future by both clubs. “Everybody knows the situation,” he admitted, all but confirming speculation that has been rife all week.

“I shouldn’t talk because I don’t like to talk about the future or next season. Dortmund and Man City told me I’m not allowed to say anything until it’s completely done. We’ll have time to talk.

“I’d love to talk, they tell me don’t say anything until the legal actions [are done]. We’ll have time to talk, not because I don’t want.”