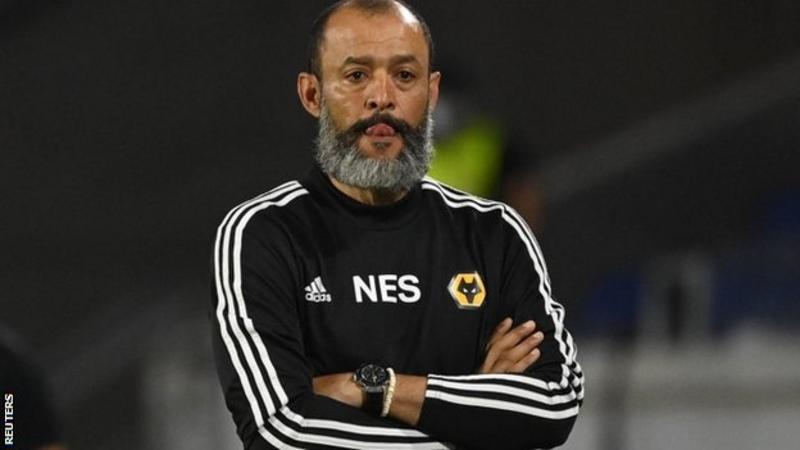 Their campaign lasted 383 days and 59 games, and 11 of the 14 players who featured against Crusaders on 25 July 2019 also played in Duisburg.

Wolves will not be in Europe next season after finishing seventh in the Premier League.

“We need more players to help us, it’s a small squad,” said Nuno.

On Tuesday, Wolves were knocked out by Lucas Ocampos’ late header for Sevilla, after Raul Jimenez had an early penalty saved.

They only used 21 players in the Premier League this season, three fewer than anybody else.

On top of that they named a strong team in most of their 17 Europa League matches. Eight of their players made 50 or more appearances.

Nuno said: “It’s time to recover. We need to rest, a big break. We should prepare well for next season and make good decisions to allow us to continue growing.

“It is time to reflect and analyse. The team that started the game is the same as the first game of the season. We made mistakes we cannot repeat.

“Let’s look at our future and what we need. The club has been amazing. Making good decisions will help us to be stronger.”

BBC Radio 5 Live pundit Matt Jarvis, who played for Wolves from 2007 to 2012, says some of the club’s star players could leave if they do not achieve anything in 2020-21.

“Next year is a huge year for Wolves to go and attack it,” he said. “If at the end of it there is no European football and no silverware, I think some of the players will start looking to move somewhere else.

“Raul Jimenez is not going to be playing every week at any club above Wolves, and as a forward you want to be playing week in, week out or you lose your sharpness.”

Captain Conor Coady was one of three Wolves players to play 57 of their 59 games this season – only sitting out two Carabao Cup matches. He played every minute of the games he featured in – 5,130 in total.

“More than ever we want to be back,” the 27-year-old English centre-back told BT Sport. “The competition is amazing and if anyone says otherwise they are wrong.

“We didn’t want to make up the numbers and we got to the last eight, which is an incredible achievement for a team that was in the Championship three years ago.

“I am proud of every single person that is involved in this club.”