Leon Goretzka and Robert Lewandowski scored late on to keep Bayern Munich top of the Bundesliga with 4-2 comeback win over Borussia Dortmund in Der Klassiker.

Lewandowski completed his hat-trick in the final minute, shortly after Goretzka put Bayern ahead for the first time, long after Erling Haaland had fired the visitors 2-0 ahead inside nine minutes.

The win keeps Bayern two points clear of RB Leipzig, who had increased the pressure on the defending champions earlier with a 3-0 win at Freiburg.

It was the sixth consecutive league game where Dortmund conceded at least four goals at the Allianz Arena, a bitter blow for Edin Terzic’s team after frustrating Bayern for the first 88 minutes.

The visitors made a furious start. Haaland scored in the second minute with the help of a deflection from Bayern defender Jerome Boateng, seven minutes before Thorgan Hazard set him up for a tap-in.

But Lewandowski pulled one back in the 26th and equalised from the penalty spot before the interval after Mahmoud Dahoud fouled Kingsley Coman in the area, confirmed courtesy of a VAR review.

Haaland hurt his right foot after a challenge from Boateng and had to go off on the hour mark, before Goretzka capitalised on a defensive mistake to make the breakthrough in off the left post, and Lewandowski claimed his 31st goal of the season in the dying moments.

Elsewhere, Frankfurt were held to a 1-1 draw by Stuttgart and failed to take advantage of third-placed Wolfsburg’s 2-1 defeat to Hoffenheim, which was only their third defeat of the season.

Victory for Frankfurt could have taken them into third themselves, but they could not find a breakthrough after Filip Kostic cancelled out Sasa Kalajdzic’s opener.

Instead, Leverkusen closed in on an increasingly tight race for the top four with a 1-0 win at Borussia Monchengladbach, with Patrik Schick the scorer of the game’s only goal to move them three points behind Frankfurt.

Hertha Berlin eased their relegation worries with a much-needed win courtesy of an 89th-minute Dodi Lukebakio penalty to beat Augsburg 2-1 and are now three points ahead of Mainz, who sit in the relegation play-off place. 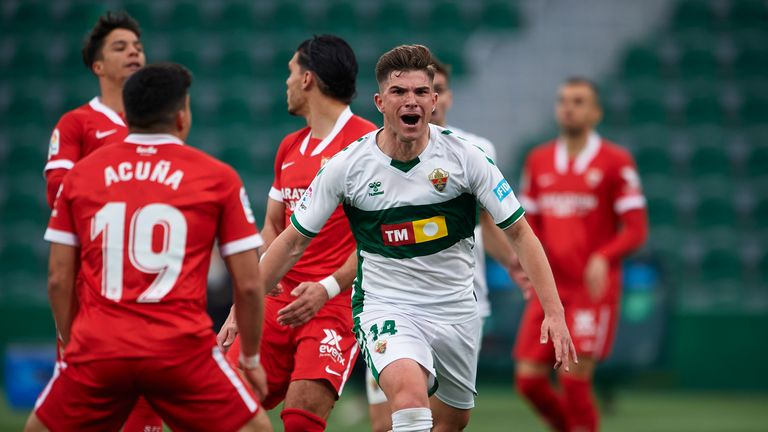 Sevilla slumped to a surprise 2-1 defeat at struggling Elche in La Liga to complete a miserable week of three consecutive losses.

Julen Lopetegui’s side were reeling from their Copa del Rey semi-final elimination by Barcelona on Wednesday and fell behind in the 70th minute when Raul Guti appeared unmarked in the box to smash home a cross after Elche attacked following a throw in.

Guido Carrillo doubled Elche’s lead six minutes later, heading a free-kick in off the post and over the line before Sevilla ‘keeper Tomas Vaclik could get to the ball.

Luuk de Jong pulled one back for Sevilla in the 90th minute and they had five additional minutes to find an equaliser but they were beaten again after last week’s 2-0 league loss to Barcelona and their 3-0 Cup defeat at Barca in the second leg at the Nou Camp, having won the first leg 2-0.

Sevilla are fourth in the standings on 48 points, 10 behind leaders Atletico Madrid who face Real Madrid on Sunday.

Elsewhere in Spain, Valladolid moved three points clear of the bottom three with a 2-1 win over Getafe, three points further behind Cadiz, who beat Eibar 1-0 thanks to Alvaro Negredo’s goal.