Match report and free highlights as Manchester City make it 17 consecutive wins in all competitions; Second-half goals from Riyad Mahrez and Bernardo Silva after Richarlison cancelled out Phil Foden opener

Manchester City secured a 17th straight win in all competitions to move 10 points clear at the top of the Premier League after beating Everton 3-1 at Goodison Park on Wednesday.

Riyad Mahrez’s brilliant strike nudged the visitors back in front (63) before Bernardo Silva secured the victory for the runaway Premier League leaders (77).

The result moves City 10 points clear of rivals Manchester United at the summit while Everton stay in seventh place following a fifth straight home game without a win ahead of facing Liverpool at Anfield on Saturday, live on Sky Sports. 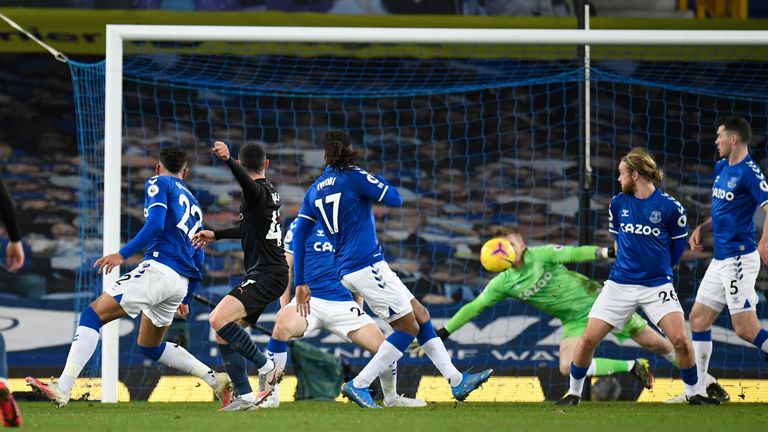 Man of the match: Riyad Mahrez.

With a third of the season remaining, City continue to set the standards as they become the first top-flight side to win their first 10 league games of a calendar year.

Everton had won just one of their previous 14 Premier League games against Manchester City, winning 4-0 in January 2017 at Goodison Park, but Carlo Ancelotti was seeking a much-improved performance following Sunday’s 2-0 home defeat to Fulham. The Italian recalled Yerry Mina to his defence, but the Colombian was forced off with a suspected calf injury inside the opening 20 minutes. By then, Gabriel Jesus had already gone close to breaking the deadlock when he was fed by Rodri, but Michael Keane did just enough to put the forward off his wayward shot.

But the runaway leaders would convert their dominance of the ball into the opening goal in the 32nd minute. Everton could only half-clear a Mahrez cross and the ball fell for Foden whose shot took a deflection off Seamus Coleman – on to replace the injured Mina – to beat Jordan Pickford.

Everton were level six minutes later, however, with Coleman playing an altogether different role. It was his cross that was met sweetly by the run of Lucas Digne on the left side of the area, and when the Frenchman’s shot struck the post it bounced straight onto the thigh of Richarlison and in to level the scores. 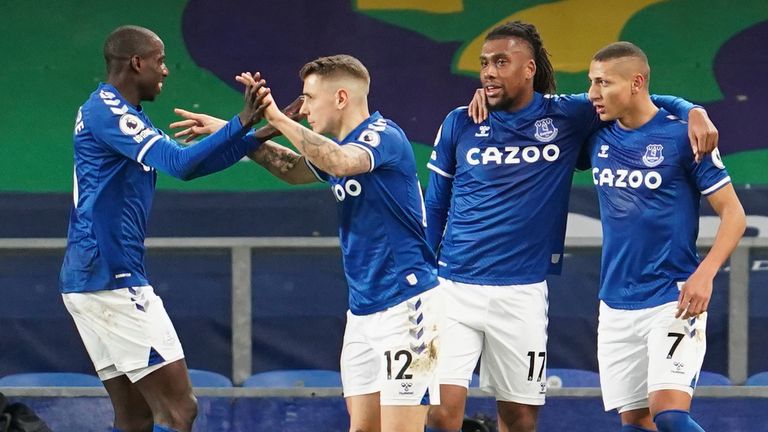 It was the first time in 45 days that City had conceded a Premier League goal in open play, stretching back to Callum Hudson-Odoi’s late consolation in Chelsea’s 3-1 defeat at Stamford Bridge, but Guardiola’s men refused to buckle after the interval.

Pickford was drawn into action within six minutes as Mason Holgate’s clearance found Silva, but his low shot was into the England goalkeeper’s gloves.

Jordan Pickford returned in goal for Everton as he replaced Robin Olsen having recovered from a rib injury. Yerry Mina and Michael Keane returned as part of a back three while Alex Iwobi came in for James Rodriguez. Seamus Coleman and Andre Gomes dropped to the bench.

Pep Guardiola makes three alterations to the side that beat Tottenham 3-0 as Ilkay Gundogan, John Stones and Oleksandr Zinchenko dropped out with Ruben Dias returning from illness to the starting XI alongside Riyad Mahrez and Kyle Walker.

City continued to move the ball quickly as Kyle Walker was afforded too much space to find Jesus to his left as the Brazilian fashioned a yard of space to drill a left-foot shot wide of the near post. Everton were sitting deeper and deeper and they were fortunate when Rodri rose unmarked to meet Foden’s corner just after the hour-mark but he could only plant his header a yard wide.

But Everton’s luck ran out a minute later when City were rewarded for their endeavour with a second goal. Guardiola had instructed his side to target Everton’s makeshift left-back Ben Godfrey, and after Silva found the underlapping run of Mahrez, the Algerian’s unerring finish was beyond the reach of Pickford as it nestled into the net via the far post.

Paul Merson told Soccer Special: “It’s a worldie! I said they were moving up through the gears, City!”

Carlo Ancelotti turned to Joshua King and James Rodriguez on his bench, but there would be no let up for Everton as City raced away with a trademark third with 13 minutes remaining. Again, the ball was worked right as Walker brought in Jesus, whose lay-off found Silva running at pace. His first touch took him away from Keane and his second took the ball into the net via Pickford’s right glove.

There was still time for Guardiola to introduce Kevin de Bruyne following his one-month lay-off as City saw out the game with ease. 10 points clear at the summit, there is no stopping City now.

What the managers said 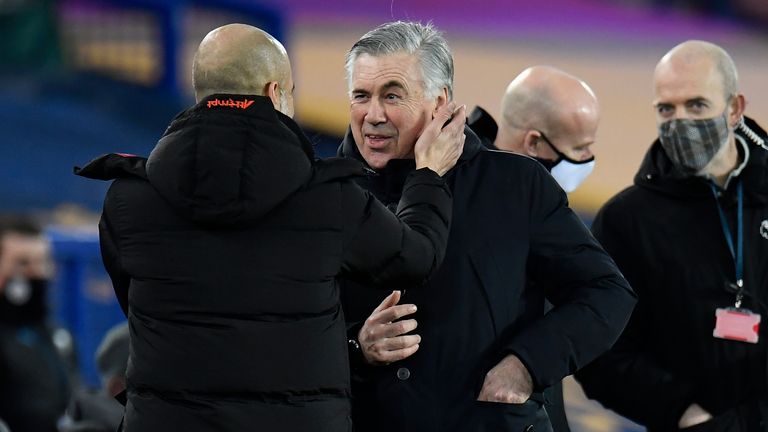 Everton boss Carlo Ancelotti: “It was hard, almost impossible. We were in the game for an hour and we fought.

“When they scored the second goal it was very difficult. They are the best team and we are not at the same level. They don’t have only quality, they are also strong.

“At the moment they are the best team, they have quality, power, belief. It is very difficult to compete with them. It will be a different game against Liverpool. We are on a good run away and we believe more. Liverpool are a fantastic team but in football you never know.

“I think so [we have lost to the champions], it is really difficult to say another name. Manchester City in this moment are in a good move, they have fantastic quality, they have belief, they are strong because we tried to put the game on a strong side but it was difficult against Rodri, Ruben Dias and Aymeric Laporte.

“They are able to play really well with the ball and work hard without it, they do not give you much possibilities to play, the effort of all the players was really high.

“Yerry Mina I don’t think he is going to play (against Liverpool), we have to look at Dominic Calvert-Lewin and prepare well for the next game. It is a great opportunity, we don’t have to have regrets tonight, the regrets were against Fulham. We know how much the next game is important for that supporters and will do all we need to to get the result on Saturday. The derby is a special game and away we have a good run so we hope for this.” Manchester City boss Pep Guardiola: “It was not easy to find the space but we didn’t concede another chance after their goal, We created enough to win by a bigger margin. Goodison is a tough place to come but our mentality is incredible. Another win, and we’re playing to get more. It was a good performance again. We reacted really well to Liverpool scoring at Anfield and we did the same thing today. They’re a really good team.

“If we want to win titles, we’re going to need the entire squad and what pleased me today was the solidarity of the squad even with people like Benjamin [Mendy] in the stands. We have an incredible schedule so we’re going to need everyone. We go into every game trying to get the points and with a good performance. This is what makes me grateful to have these players.

“Winning 10 straight games at the start of the calendar year is nice but next is Arsenal. Tonight we celebrate but tomorrow afternoon we will start to think about Arsenal. It’s better you don’t see the schedule, otherwise you get depressed. But at the same time, it’s a beautiful challenge. We will come back here in a few weeks to try to get to the semi-finals of the FA Cup and we’ve seen how hard it will be. It’s not worth looking at the schedule. Just the next one, and that’s Arsenal.

“It’s all about freshening the mind and the body to go again.”

On Bernardo Silva: “What a player. Everything he does, he does incredibly well. What he did in the second year was unstoppable and now he’s back. He’s a lovely person and as a manager you dream about having players like Bernardo. His mm and dad must be so proud of the son that they have.”

Analysis: City stepped up the gears 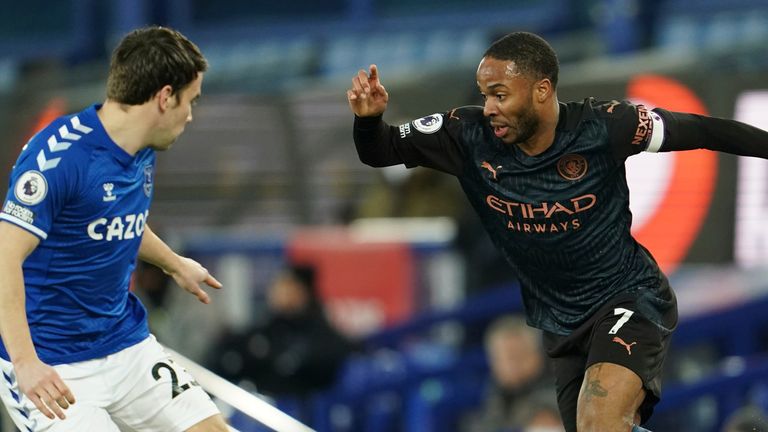 “If it was 100 passes a goal, City would’ve scored another. They’ve been so comfortable. In the end, the gap between the two sides was very big, but in the 10-15 minutes after Everton got back into the game, they really didn’t need half-time. But there’s plenty more still to come with Man City.

“Everton were much better than they were against Fulham and they’re not going to come up against that City team every week. If they put in more performances like that every week, they’ll get more wins than defeats. But in the end, the gap was big between the sides – City stepped up the gears in the second half.”

Man of the match – Riyad Mahrez 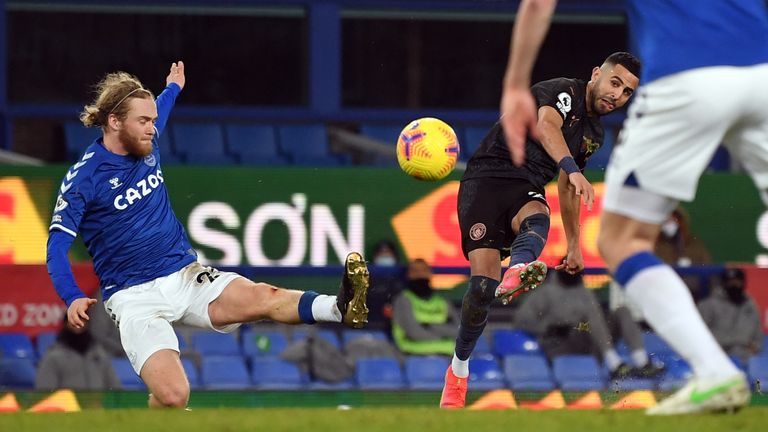 Mahrez enjoys his trips to the blue half of Merseyside. It was here where he tormented Everton for Leicester during their title-winning campaign in 2015/16, scoring twice in a 3-2 win that ensured the Foxes sat top for Christmas, while he was also on target during City’s victory last season.

On Wednesday, he was the standout performer as he targeted Ben Godfrey, producing seven crosses in open play as City picked away at Everton’s stubborn but tiring defence. Eventually, he was rewarded with the game’s decisive goal shortly after the hour-mark.

Mahrez told Amazon Prime: “It was a good performance, we played good again. It is a shame to concede the goal in the first half but we haven’t conceded many.

“We tried to pass and move to find space to score the goal. We [himself and Bernardo Silva] have always had a good connection, we don’t even need to speak to each other we know where we are. We all know each other.

“We train so well we know the movement. When you keep winning and scoring goals the confidence grows. It is difficult for the opponent. We are in a very good moment. I don’t know about the title we only think about the next game – Arsenal.” 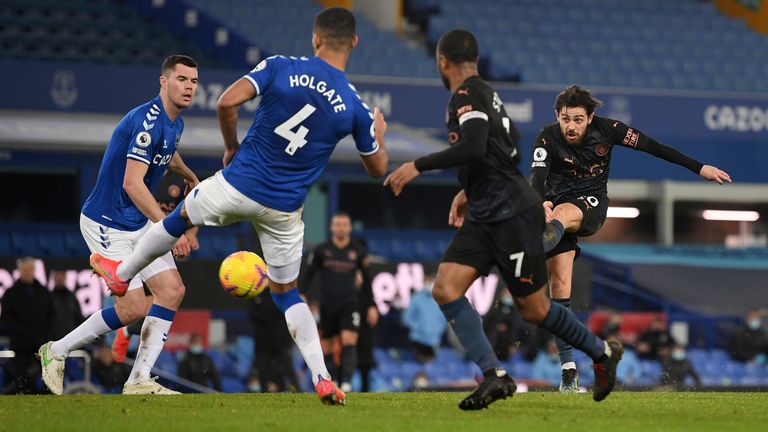 Everton travel to face Liverpool in the Merseyside derby on Saturday, live on Sky Sports Premier League and Main Event; coverage starts at 5pm with kick-off at 5.30pm.