Dominic Calvert-Lewin sent another reminder to Gareth Southgate on the eve of the England squad announcement as his hat-trick powered Everton into the last eight of the Carabao Cup with a 4-1 win over West Ham.

The 23-year-old opening the scoring 11 minutes in and then made sure of victory with two more late on after Robert Snodgrass levelled and Richarlison restored Everton’s lead.

Richarlison would hobble off on the hour after an earlier injury for Jonjoe Kenny, the only blemish on the night for the hosts as they made it five wins out of five to start the campaign.

Southgate is due to name his squad on Thursday for upcoming games against Wales, Belgium and Denmark, and Calvert-Lewin must be firmly in the frame for a first senior cap after moving on to eight goals from five games.

⚽️⚽️⚽️ 8 of Dominic Calvert-Lewin's 48 career goals (including both hat-tricks) have been scored in the last 18 days pic.twitter.com/3FLV6XLTcP

The Goodison Park trophy cabinet was last restocked in 1995 with the FA Cup and Charity Shield, but there is a different feel around the club after nine points from nine in the league, and they will be taken seriously in Thursday’s draw for the quarter-finals.

Carlo Ancelotti’s new-look side would welcome some silverware as a sign of progress but also of intent, and there was plenty of the latter in the Italian’s team selection as he included James Rodriguez, Richarlison and Calvert-Lewin in a strong side. 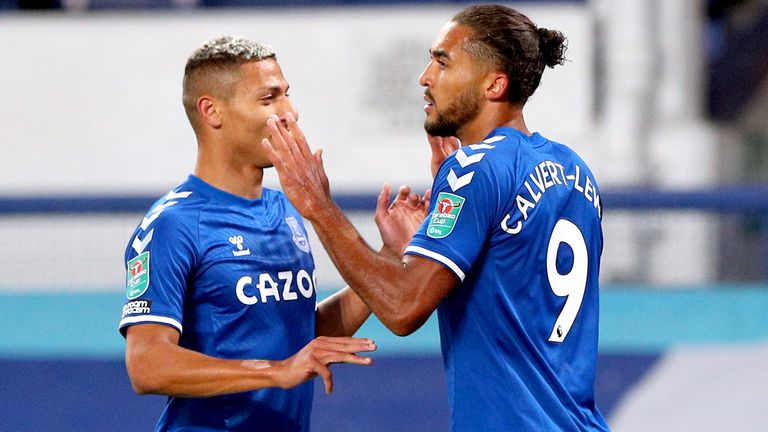 Michael Keane turned on some unexpected style to spin away from Manuel Lanzini before chipping a ball that all too easily floated over the West Ham defence, allowing Calvert-Lewin to take a touch before nonchalantly poking it beyond Darren Randolph.

Even so, Everton attacked with confidence time and again, able to cut through the visitors.

They might have added to the score before the break, but Randolph pushed a Richarlison shot on to the roof of the net after a good ball from the outstanding Allan, while the Brazilian was also denied by the assistant’s flag.

For all Everton’s dominance in the first half, West Ham caught them cold in the second as they needed only 25 seconds to level the match.

Anderson pulled the ball back for Snodgrass on the edge of the area and the Scot bent the ball beyond goalkeeper Jordan Pickford. 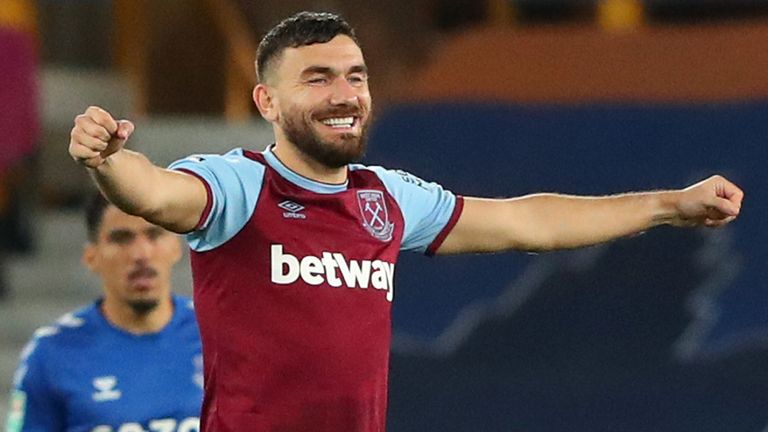 It was only a brief reprieve. Richarlison had hit a post and Gylfi Sigurdsson brought a sharp save from Randolph before the hosts went back in front in the 56th minute, when Richarlison was allowed time and space to cut in from the left before a big deflection off Declan Rice saw his shot beat the goalkeeper.

It would be Richarlison’s last meaningful contribution, however, as he was hurt trying to tackle Ben Johnson, and hobbled off on the hour to be replaced by Alex Iwobi.

Lanzini should have done better when Andriy Yarmolenko teed him up at the far post while Pickford had to make a strong save from Haller’s acrobatic effort 15 minutes from time, but Calvert-Lewin would kill off the tie as he bundled home after Alex Iwobi’s shot hit the post with 12 minutes left.

The fourth was almost as easy as Sigurdsson found him in space in front of goal, and he side-footed home for his second hat-trick of the season.

Everton take on Brighton at Goodison Park in the Premier League on Saturday afternoon (3pm), while West Ham face top-of-the-table Leicester at the King Power on Sunday (12pm).