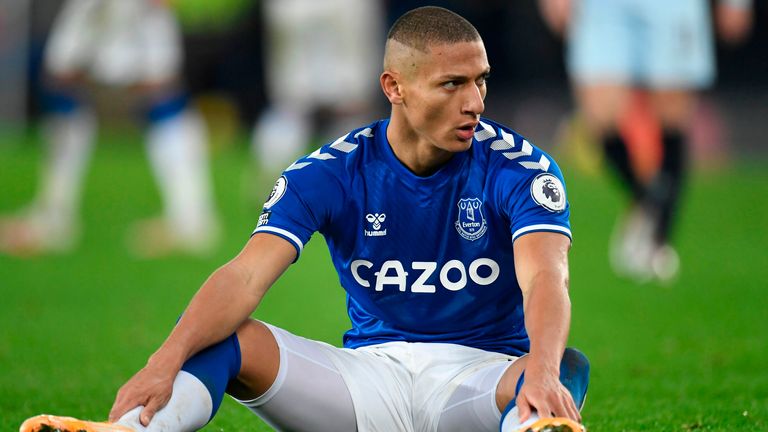 Team news and stats ahead of Everton vs Man City in the Premier League on Monday (kick-off 8pm).

Richarlison and James Rodriguez will not be fit in time for Everton‘s clash against Manchester City on Monday.

Richarlison missed the win at Sheffield United on Boxing Day and is set to sit out another game under concussion protocols after taking a heavy blow to the head in the Carabao Cup quarter-final defeat to Manchester United, while Rodriguez will miss a sixth successive match with a calf problem.

Midfielder Allan (hamstring) remains sidelined and Lucas Digne will not be back until the end of January, meaning Toffees boss Carlo Ancelotti will have an unchanged squad.

Manchester City will again be without striker Gabriel Jesus and right-back Kyle Walker after both tested positive for Covid-19 last week.

Record goalscorer Sergio Aguero played another 13 minutes against Newcastle on Boxing Day but it remains to be seen if he is fit enough to start as he is eased back following knee trouble. Ferran Torres could again fill in up front.

Ilkay Gundogan took a blow to the foot on Saturday but should be fit. Eric Garcia is the only other definite absentee with a leg injury. Follow Everton vs Man City in our dedicated live match blog. Highlights will also be published on the Sky Sports digital platforms and the Sky Sports Football YouTube channel shortly after the final whistle.