Sometimes, we take football too seriously. Everton and Tottenham certainly didn’t in an error-strewn 5-4 FA Cup epic, which Carlo Ancelotti’s side edged to progress to the quarter-finals.

It was the game we needed in lockdown, with restrictions tightening and a government that delayed proper travel rules for 12 months now threatening a 10-year prison sentence for dodging quarantine rules after trips.

These teams provided a sweet, goal-laden escape on a biting night in the North West.

Robin Olsen had made a series of last-ditch saves and Hugo Lloris had turned a shot onto the post yet both goalkeepers walked back into the tunnel at half-time shaking their heads in disbelief at what had occurred.

READ MORE: When is the FA Cup quarter-final draw?

The opening 45 at Goodison Park had produced five goals, 12 shots on target, and an inordinate amount of loose passes as both teams seemed invested in not taking themselves or the encounter too sternly.

It was a weird, thrilling watch and that’s The Magic of mistakes in the FA Cup.

For the first half-hour, it looked as though Tottenham would swat away an undercooked Everton with ease.

They should have been ahead soon after kick-off when Steven Bergwijn clipped a cross for Erik Lamela to head in that Olsen superbly thwarted. The rebound fell to Lucas Moura, but he was off balance and fluffed his lines.

No bother though as Spurs caught the hosts cold again. Davinson Sanchez out-jumped Gylfi Sigurdsson to bury a Son Heung-Min corner to put Tottenham in front and they were purring.

Everton continuously got caught in possession in the centre of the park, somehow oblivious to their opponent’s strengths on the counter and Olsen had to keep the scoreline respectable.

In a flash at the other end, though, it was Lloris being tested and found wanting. In seven minutes, Ancelotti’s men had three goals: two potent hits from Dominic Calvert-Lewin and Richarlison as well as a Sigurdsson penalty. 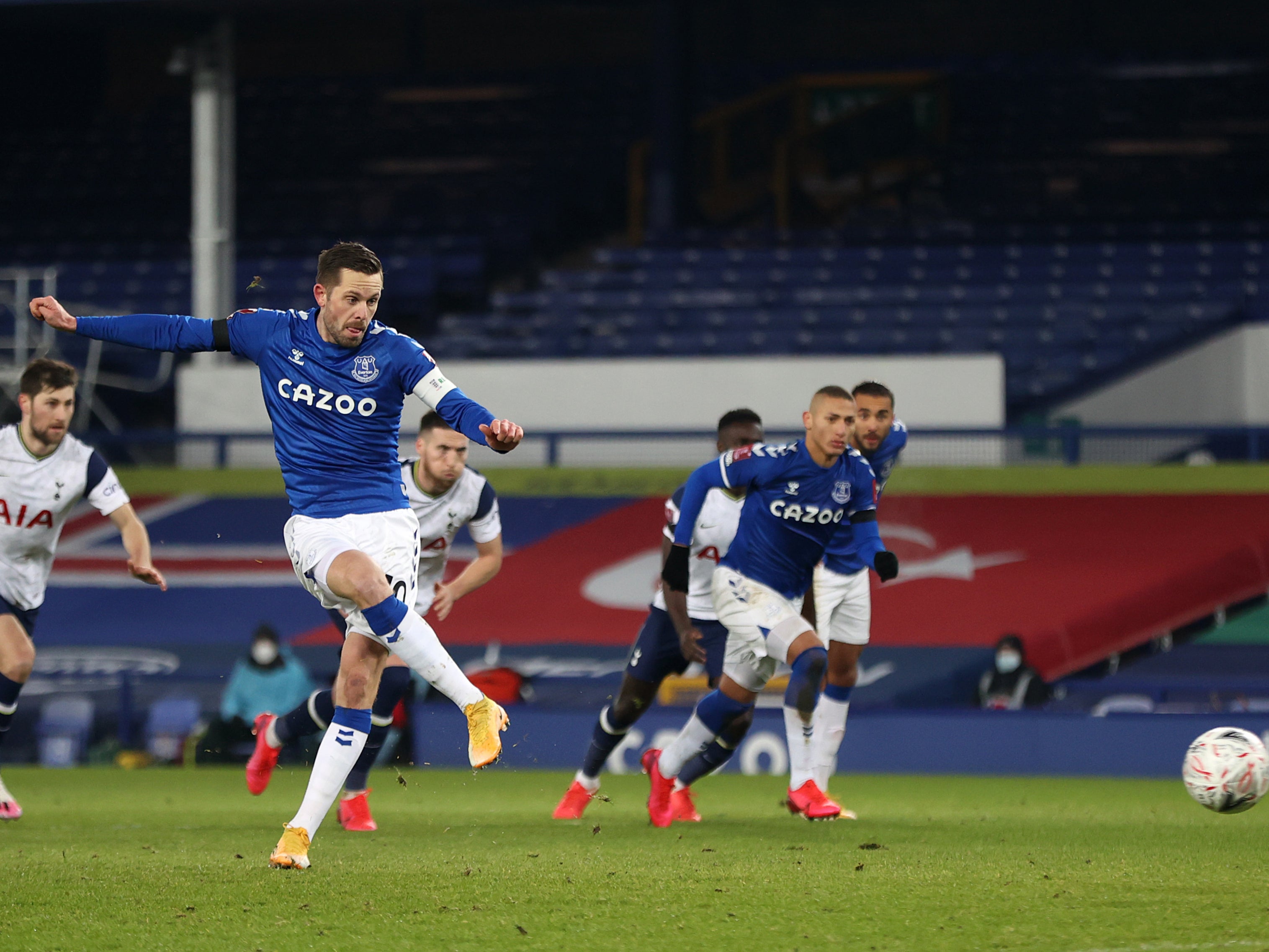 Lloris did not cover himself in glory for Everton’s first, too weak amid the ferocity of the strike that landed in the top right. Out of nothing and with speed that seemed to shock even them, the Merseysiders were in control on the scoreboard.

No one was really in control on the pitch, however. The match mirrored an episode of the Oprah Winfrey show: You get a goal, you get a goal, everybody gets a goal!

Lamela was next to have his name up in lights after Yerry Mina swiped at the air, allowing the attacker the freedom to take a touch and fire across Olsen.

Changes marked the second stanza – Harry Kane on for the visitors, replacing Bergwijn, while Calvert-Lewin swapped out for Seamus Coleman.

Still, the fun remained. Spurs noted susceptibility from Everton at set-pieces and made sure to get enough bodies in the box when a corner was whipped in from the left, which Toby Alderweireld flicked towards the bottom right.  Olsen brilliantly got his fingertips to it, but the ball broke for Sanchez – involved in a tussle with Sigurdsson – who cleverly stuck his foot out to poke home. 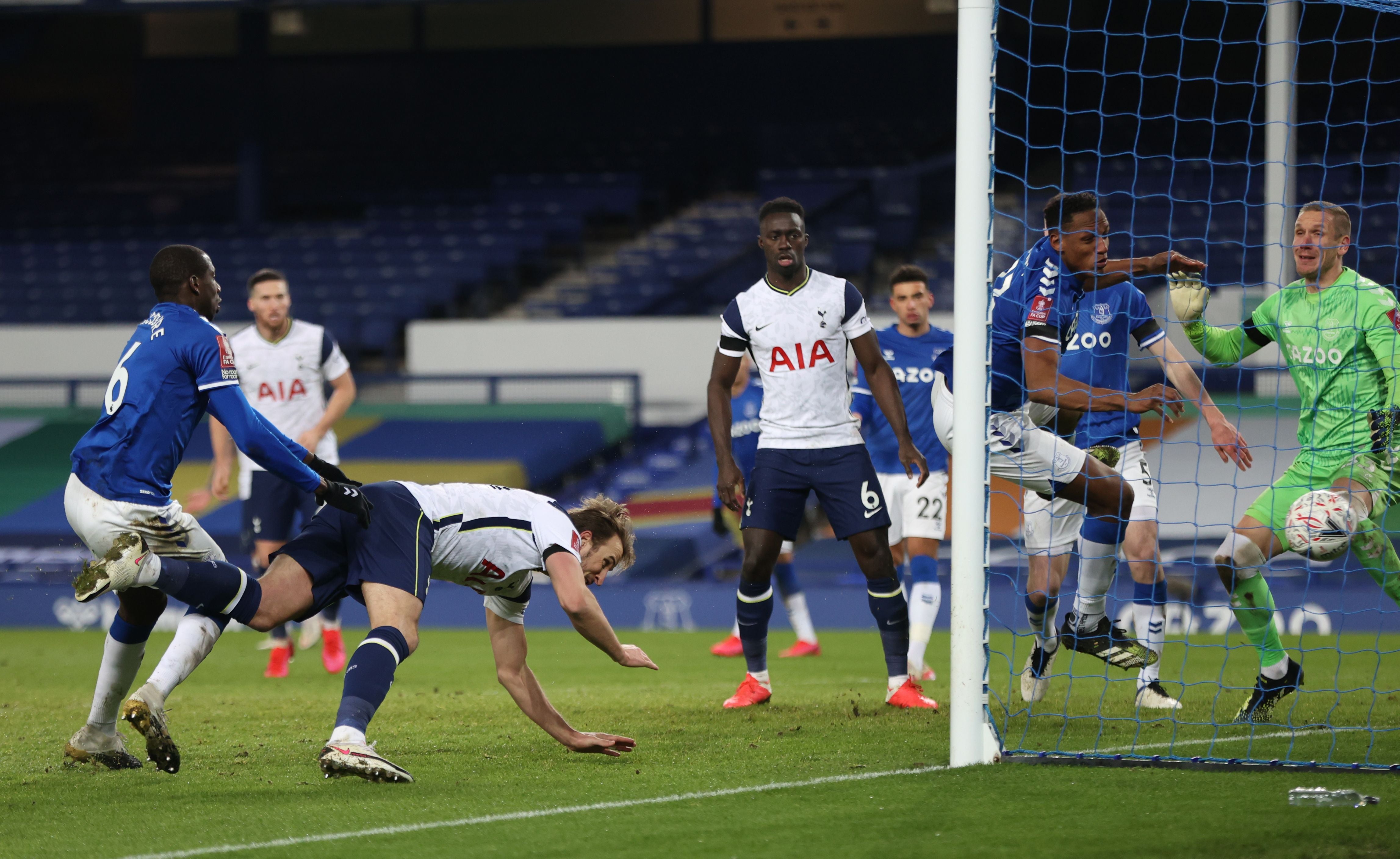 So then, six goals in 57 minutes with 18 shots inside the box – who says Jose Mourinho can’t do fun? Not that the Portuguese looked to be enjoying the mistakes masterclass on display.

And he certainly wasn’t chuffed shortly after as there was more.

Spurs didn’t clear their lines and Sigurdsson played in Richarlison on the left. He timed his run well, took a touch and thundered across Lloris from a tight angle.

As if that was it. Son had a corner pushed out by Olsen, with Lamela latching onto the dropping ball and sending it into the top right, but Abdoulaye Doucoure headed off the line.

Son took possession again, superbly crossing from the left for Kane, who sent a diving header in to equalise for Spurs.

Dele Alli, on as a substitute, got a yellow for a different kind of dive. Cautions replaced goals late in the match, but we did have one final swing in the first half of extra-time.

Sigurdsson showed stellar footwork to spin before supplying Bernard with a neat ball.

The Brazilian timed his run excellently, waited for the ball to drop and blasted a beauty past Lloris.

It was a worthy winner and a shame that the clash, this holiday from reality, had to end.