The FA has offered to stage the Carabao Cup and FA Cup finals as test events for the return of fans to stadiums.

Sky Sports News reported last week the FA and EFL were working with the Government to get fans inside Wembley for the two showpiece events, with both finals being identified as key milestones for the wider game, and – crucially – ahead of this summer’s Euros.

On Monday, Prime Minister Boris Johnson outlined his road map for easing coronavirus lockdown restrictions and announced supporters are set to return to sporting events from May 17.

Statement from The @FA on the limited return of fans. pic.twitter.com/O5EqQt3ju2

Although the Carabao Cup final is set to be played on April 25 and the FA Cup final on May 15, it is hoped one-third of Wembley can be full of spectators, providing it is safe to do so. That would mean 30,000 fans in attendance for each of the finals.

In response to the Prime Minister’s announcement, the FA said: “The FA is absolutely delighted that fans will be allowed back soon. The game is simply not the same without them and we look forward to the return of full stadia as soon as it is safe and possible.”

Which clubs will be at Wembley?

Eight teams are left in the FA Cup. The quarter-finals will see Leicester vs Manchester United, Chelsea vs Sheffield United, Bournemouth vs Southampton and Everton vs Manchester City.

Last month, the EFL moved the Carabao Cup final from February 28 to April 25 to give it the best chance of having supporters inside Wembley.

An EFL spokesperson said: “We note the Prime Minister’s announcement today in respect of a roadmap for easing national lockdown restrictions and the Government’s criteria for a phased return of fans to sporting events.

“As has been our approach throughout the pandemic, the EFL wants to see supporters back in our stadia as soon as it is safe to do so and we will continue to work with clubs, DCMS, the SGSA and local authorities to this end.

“Following a successful fan pilot programme in the Autumn, the EFL and member clubs have shown test events for fans can be safely delivered with the appropriate measures in place.

“With the Carabao Cup Final taking place on 25 April and the culmination of the regular EFL season on 8/9 May, we look forward to engaging with the Government about its pilot programme and will be working to welcome as many fans as possible to the Sky Bet Play-Off Finals which will conclude the 2020-21 season on the Spring Bank Holiday weekend.”

The FA is very keen to have fans back inside Wembley with the Euros starting just four weeks after the FA Cup final.

Wembley is due to host seven matches including all three of England’s group games, a last-16 clash, both semi-finals, and the final.

Having supporters inside Wembley for the FA Cup final is seen as a key indicator of whether empty stadiums can be avoided for the upcoming tournament matches.

UEFA is due to make a decision next month on how and where the Euros will be staged.

Fans set to return from May 17

Larger outdoor seated venues such as football stadiums will be allowed up to 10,000 people or be a quarter full, whichever is lower.

The proposals rule out the possibility of fans attending any further regular-season matches in the EFL, but it would mean the final weekend of the Premier League season, set to be played on Sunday, May 23, could potentially be played in front of a limited number of fans. 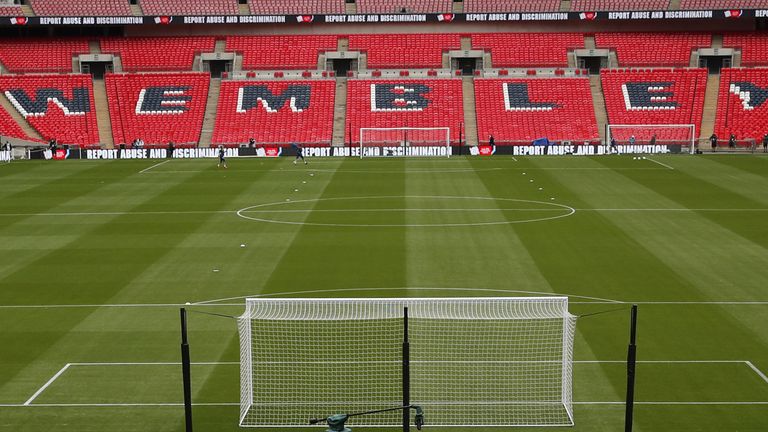 Supporters have been prevented from attending sporting venues across England since the scrapping of the tier system in December.

The proposals also leave open the possibility of spectators returning over the summer for Wimbledon, Royal Ascot, the British Grand Prix and cricket internationals and county matches, depending on whether the conditions for easing restrictions have been met by May 17.