This was truly a game of two halves – separated by a half-time break longer than either one. It was worth the wait in the end for Sydney FC, who shook their jitters in front of goal with a 3-0 win over a 10-man Macarthur FC.

The Bulls lost skipper Mark Milligan to a red card after 21 minutes but still looked the better side for much of Saturday night’s clash at Campbelltown Stadium, which was lashed by storms that delayed the start of the second half, stretching the interval out to nearly an hour. 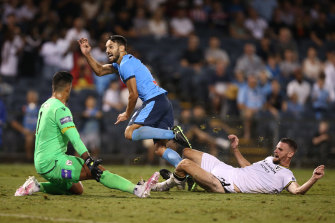 Eventually, the Sky Blues made their numerical advantage count, but coach Steve Corica had to cycle through his bench to find the right mix after a lacklustre opening 45 from the defending champions.

Teenager Patrick Wood, last year’s NSW NPL Golden Boot, finished with a brace after providing the breakthrough in the 66th minute with his first A-League goal in just his fourth senior appearance – a tap-in after Adam Federici parried an attempt from Kosta Barbarouses.

Then 10 minutes later, Milos Ninkovic – who Macarthur tried to lure across town for their inaugural A-League campaign with a lucrative three-year contract – made it two with a moment of pure magic. Staring down a block of six Macarthur defenders from just outside the edge of the box, Ninkovic danced through them all, prodded the ball forward, skipped past their challenges and finished the job from close range.

Bulls coach Ante Milicic, who said he was still the A-League’s best player during the week, could only look on wistfully. 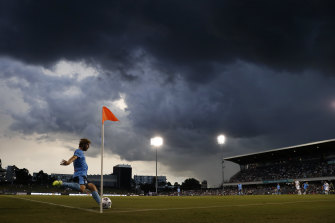 A storm forced a lengthy half-time delay at Campbelltown Stadium.Credit:Getty

With four minutes of regulation time to go, Wood nabbed his second goal with a clinical finish after a mazy run from fellow substitute Jordan Swibel found him free just outside the six-yard box.

It wrapped up Sydney’s second win from four games this season, but Corica won’t be satisfied with another goalless return from Barbarouses and his strike partner Trent Buhagiar, who was yanked for Wood on the hour mark and still hasn’t found the back of the net this season.

The Bulls did well to hang on for as long as they did, with the second-half introduction of dynamic youngster Lachie Rose triggering more than a few scares for the Sky Blues, but the final margin was deflating.

Were it not for Milligan’s send-off, it would have been a very different game. The former Socceroos skipper was given his marching orders when Ivan Franjic dangerously chose to head a long ball back towards Federici.

Buhagiar sniffed it out and was one-on-one with Federici before Milligan chopped him down. It was an easy decision for referee Alex King, despite the veteran’s audacious claim he got the ball in the tackle.

Moments earlier, Buhagiar had a golden chance to open the scoring but was unable to guide home a cross from Joel King, who had been unleashed by a well-weighted Ninkovic pass.

The Bulls sacrificed Tommy Oar, who was making his first start for the club, to bring on Antony Golec as a defensive reinforcement – but for the rest of the half, it was hard to tell which team had 10 men.

Markel Susaeta forced a terrific save out of Andrew Redmayne in the 35th minute after a fast break down the right, wrong-footing Paulo Retre to make space for his shot.

Federici was also dialled in, tipping a Ryan McGowan volley over the bar in the 10th minute – but aside from Buhagiar’s glancing effort, Sydney failed to create any meaningful chances until well after the elongated half-time break.