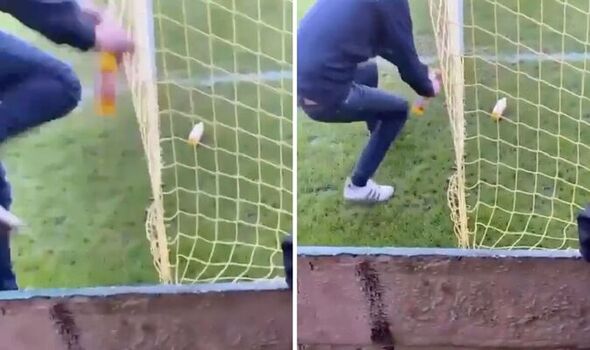 A non-league footballer has hit out at the lack of protection for footballers from supporters after he was shown a red card for reacting angrily to a fan urinating in his water bottle during a match. Goalkeeper Tony Thompson was sent off during Warrington Town’s game against Guiseley Town on Saturday after discovering the contents of his bottle had been doctored by an opposition fan.

Thompson 28, who previously played for League One outfit Morecambe, was incensed after seemingly drinking from the bottle – believing it to be filled with water – and making the unpleasant discovery.

The incident occurred in the second half of the match and Thompson was given his marching orders by the referee after finding the person allegedly responsible and squirted the contents at the man.

The club tweeted to confirm the incident during the game: “Just managed to catch Thompson on his way back in – an away fan has apparently urinated in his water bottle, and then when Thompson has squirted it at said ‘fan’ after finding out, he’s been sent off. (0-0).”

After the game had finished, an outraged Thompson took to social media to register his disgust with the decision and the gruesome act from the opposition fan, who has not been named. There was a long stoppage in play as Warrington players confronted the person responsible before they were ejected from the Drivers Direct Stadium.

“Today I fell out of love with the GAME!” Thompson wrote on Twitter. “I’ve been called many names but for someone to p*** in my bottle, for me to drink it and then to be told I wasn’t allowed to react because I’m a player is outrageous.

“That person has put me [and] my family’s health at risk and knocked me sick.”

After watching his side lost the FA Trophy Vase match 1-0 to Guiseley thanks to a 90th-minute strike, Warrington boss Mark Beesley admitted he had never dealt with such an incident in his entire career, before criticising the referee for failing to deal with the incident properly.

“I don’t think I’ll ever be involved in anything like that again,” he said. “The Guiseley staff apologised – it was disgusting and there’s no place in life for things like that.

“I think the referee has completely lost control after that – if someone urinates in my bottle and I drink it, I’m going to throw it away. To send him off for throwing the bottle away is a disgrace.

“It’s hard to talk about the football when such a big incident like that happens. From our point of view, the welfare of our players is paramount and what Tony was subjected to was disgraceful. Whoever did it should hang their head in shame and never be allowed into a football game again.

“The referee has to see common sense – I can’t understand it.”