Home » Soccer » Forget the frenzy: Postecoglou ‘loving it’ in the Celtic cauldron

Ange Postecoglou has experienced fan fervour all over the world – but nothing compared to the frenzied fever pitch that he is now experiencing in Glasgow as coach of Celtic, half (along with Rangers) of Scotland’s “Old Firm” and one of the biggest clubs in Britain.

To say that supporters of the two ancient rivals live, sleep and breathe the game is hardly an exaggeration. But however committed they are, it will pale into insignificance compared to the laser-like focus Postecoglou has brought to the challenge of managing Celtic, whom he joined in July. 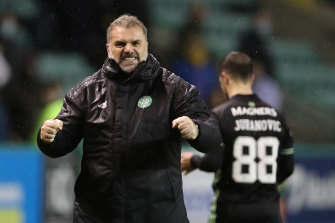 Does the incessant 24/7 media and supporter scrutiny put him off? You have to be kidding.

“I am enjoying it, I am loving it,” he declares unequivocally when asked about the pressure he faces day in, day out.

He acknowledges that he did have to win over the doubters (of whom there are far fewer now than when he arrived) given that he had never coached in a major European league before. For fans in Europe, who are often chauvinistic in their outlook, the J-League which Postecoglou won with Yokohama might as well be on the moon.

“People are still curiously looking at me and wondering why I enjoy this aspect of managing [the intense public scrutiny] and the challenges of it, but I have always loved football and I am passionate about football. Wherever I have been in that sort of environment, where other people are passionate about it, I thrive.

“I am loving it here. There are still many challenges ahead, we haven’t accomplished anything yet and we are nowhere near the levels we need to be and the toughest stuff is still ahead of us. 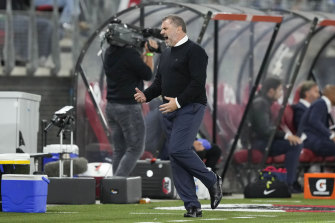 Postecoglou reacts during the Europa League qualifying play-off between AZ and Celtic in the Netherlands in August.Credit:AP

“It’s all good saying we have hit a decent bit of form, but until you bring success to an organisation … that’s when you know you have begun the process of accomplishing something.

After a shaky start – Celtic lost their first league match under Postecoglou, against Hearts, and also the first of three clashes with Rangers which are likely to be title-defining – the Bhoys have really hit their stride.

Postecoglou has brought in players, sifted his squad, tried and discarded players and worked hard to find the optimal starting line-up – all the while with supporters expecting Celtic to carry on winning.

And he is meeting that expectation. Celtic are now second on the ladder (four points behind Rangers), in the semi-final of the League Cup and are still a chance to qualify from their Europea League group.

“We are still in the early parts of a process. Am I comfortable where we are tracking? For the most part, yeah. But until you have success people are always going to question the methodology of how I go about things,” he said.

“I think people are now prepared to give me an opportunity, whereas probably at the start they were questioning whether I should have an opportunity.

“I need to bring success to the football club and that success will hopefully help change some of the perceptions.″⁣ 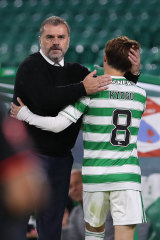 Ange Postecoglou and Kyogo Furuhashi, whom the Australian coach brought to Glasgow from his native Japan.Credit:Getty Images

The departure of Steven Gerrard, coach of league leaders Rangers in the early months of the season to take up a Premier League job with Aston Villa, should work in Postecoglou’s favour given it will be Celtic who will be enjoying relative stability.

However, Postecoglou plays that down. “It doesn’t really change anything. If you get distracted, it is very intense over here, every day there is a story about something and if you start buying into that stuff you will be chasing down rabbit holes you will never get out of. We have got to concentrate on ourselves, not worry about the external noise.”

Coaching a club like Celtic is not, of course, just about taking charge of the playing staff. Postecoglou is acutely conscious of the public-facing role he plays and the image he has to project as a representative of one of the biggest brands in British sport. It is a responsibility he relishes.

“I try and be myself, I will always back myself. But I understand it’s not just what I do as a manager and coach within the club that’s important, it’s what I do outside that because every time I speak I represent the football [staff] and those who work there and our supporters.”