Match report as Sandy Baltimore’s stunner and a Viviane Asseyi penalty gave France Women a 2-0 lead; Fran Kirby pulled one back for England Women from the penalty spot; Marie-Antoinette Katoto tapped home shortly after to hand France victory in the international friendly 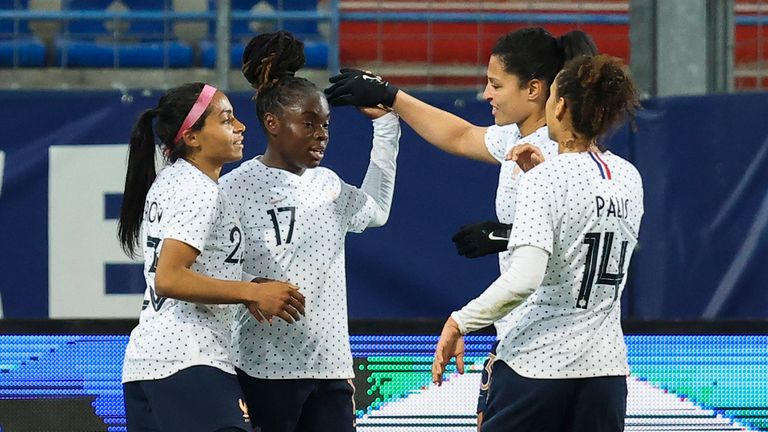 Hege Riise’s second game in charge of England Women ended in a 3-1 friendly defeat by France Women, despite an entertaining encounter in Caen.

France started the game quicker, showing plenty of pace on the wings as they pinned back England’s defence, who were without their captain Steph Houghton.

It was the impressive Sandy Baltimore who broke the deadlock for France in the 32nd minute with a curling left-foot effort into the top right corner, leaving Ellie Roebuck with no chance to reach it.

France doubled their lead just after the hour mark as Rachel Daly conceded a penalty after bringing down Elisa de Almeida inside the area. It was up to substitute Viviane Asseyi, who had only been on the pitch for three minutes, to coolly slot in for the hosts, sending Roebuck the wrong way.

England rallied as Lauren Hemp and Lotte Wubben-Moy were introduced in the 65th minute and Hemp made an immediate impact, winning a penalty in the 78th minute as she was brought down by Marion Torrent. Pauline Peyraud-Magnin was finally beaten by Fran Kirby who slotted in from the spot.

Within minutes, Keira Walsh struck the post from just inside the box as England looked to snatch a quick equaliser. But it was France who were able to capitalise on the counter-attack, Kadidiatou Diani squaring the ball for Marie-Antoinette Katoto for the tap in on the 81st minute.

Riise’s side were unable to find any answers in the last 10 minutes as a determined France saw out the game, with the Lionesses now turning their attentions to another international friendly with Canada on Tuesday.

England will play another international friendly on Thursday, hosting Canada Women at the Bet365 Stadium in Stoke; kick-off 7.15pm. Hege Riise will then name her Team GB squad for the Olympics next month.