Gareth Southgate insists supporters who jeer the taking of the knee and aim racist abuse at players will be regarded as “dinosaurs” after his England side were once again subjected to monkey chants.

Raheem Sterling and Jude Bellingham were the reported targets of a number of Hungary supporters inside the Puskas Arena as England turned in a fine performance to win their World Cup qualifier 4-0.

Just 53 days after the heartbreak of their Euro 2020 final defeat to Italy, Sterling put England in front as they ran riot after the break, with Harry Kane, Harry Maguire and Declan Rice also on the scoresheet.

But it was the abuse aimed at England’s black players which marred the evening, with missiles and a flare also thrown on to the pitch by a hostile home crowd.

This ground will be empty for the next two UEFA-organised matches due to sanctions over the racist and homophobic abuse which marred Hungary’s Euro 2020 fixtures, with the third match of a stadium ban suspended. 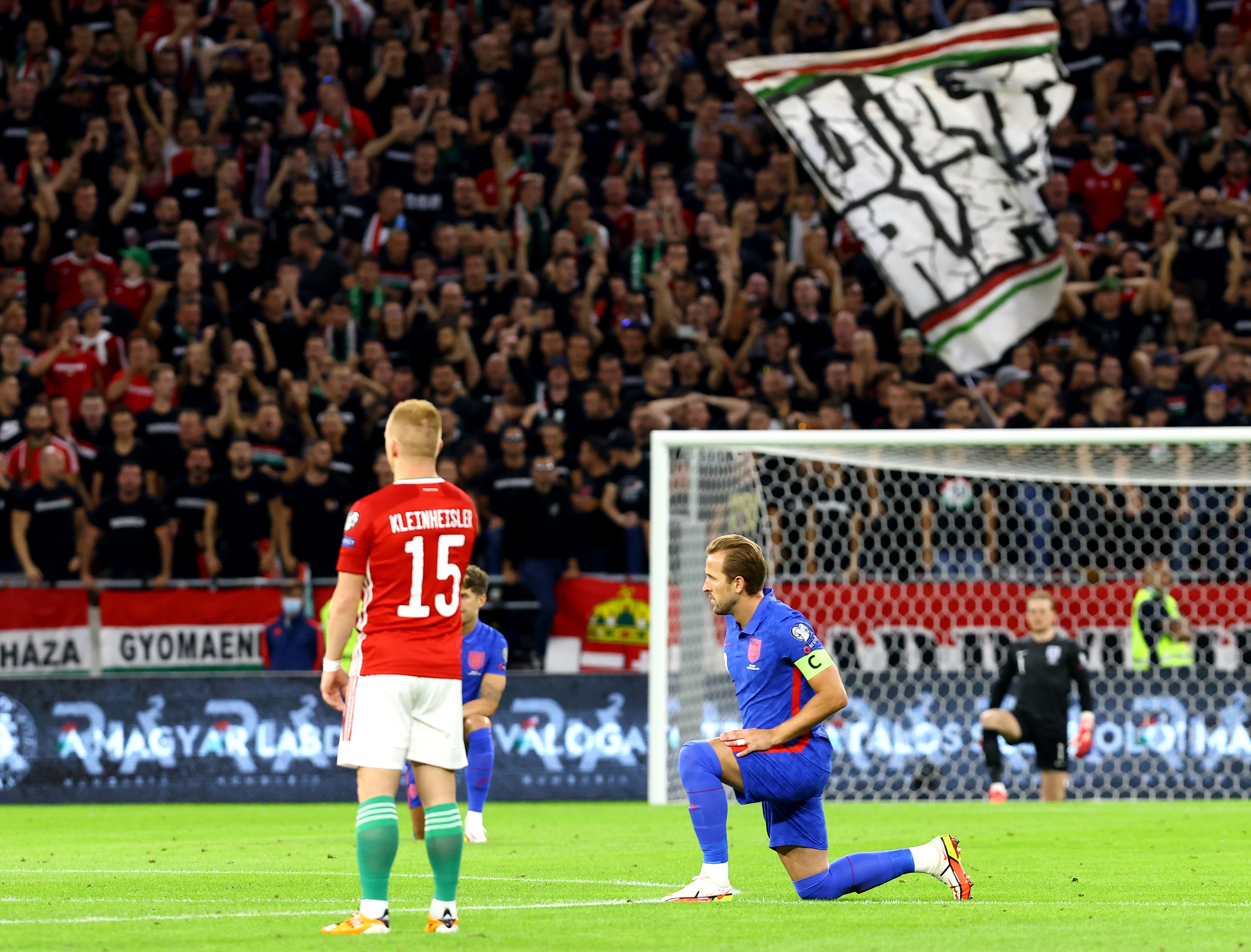 With no away fans in attendance, the jeers that met England’s players taking the knee before kick-off in the now-familiar stance against racism and discrimination were deafening.

With monkey chants then reported later in the game, it is not the first time Southgate has had to deal with the fallout from such behaviour towards his team.

Euro 2020 qualifiers in Montenegro and Bulgaria were tarnished by similar incidents, with Southgate speaking out against further abuse here.

“We weren’t really aware of it on the bench,” he said.

Although some people are stuck in their way of thinking and prejudices, they are going to be the dinosaurs in the end because the world is modernising

“It sounds like there has been some incidents and everybody knows what we stand for as a team and that that’s completely unacceptable.

“Everything is being reported to UEFA and we have to see what happens from there.

“They (the players) recognise the world is changing. Although some people are stuck in their way of thinking and prejudices, they are going to be the dinosaurs in the end because the world is modernising.

“Hungary isn’t anywhere near as diverse in their population as our country is, it is still taking us a long, long time to get to where we need to get to and inevitably, if other countries don’t have that same level of diversity, it is probably not in their thinking in the same way as in our country.

“We’ll continue to do what we do, continue to try set the right example for young people in our country who will be more influenced by us than people will be elsewhere.” 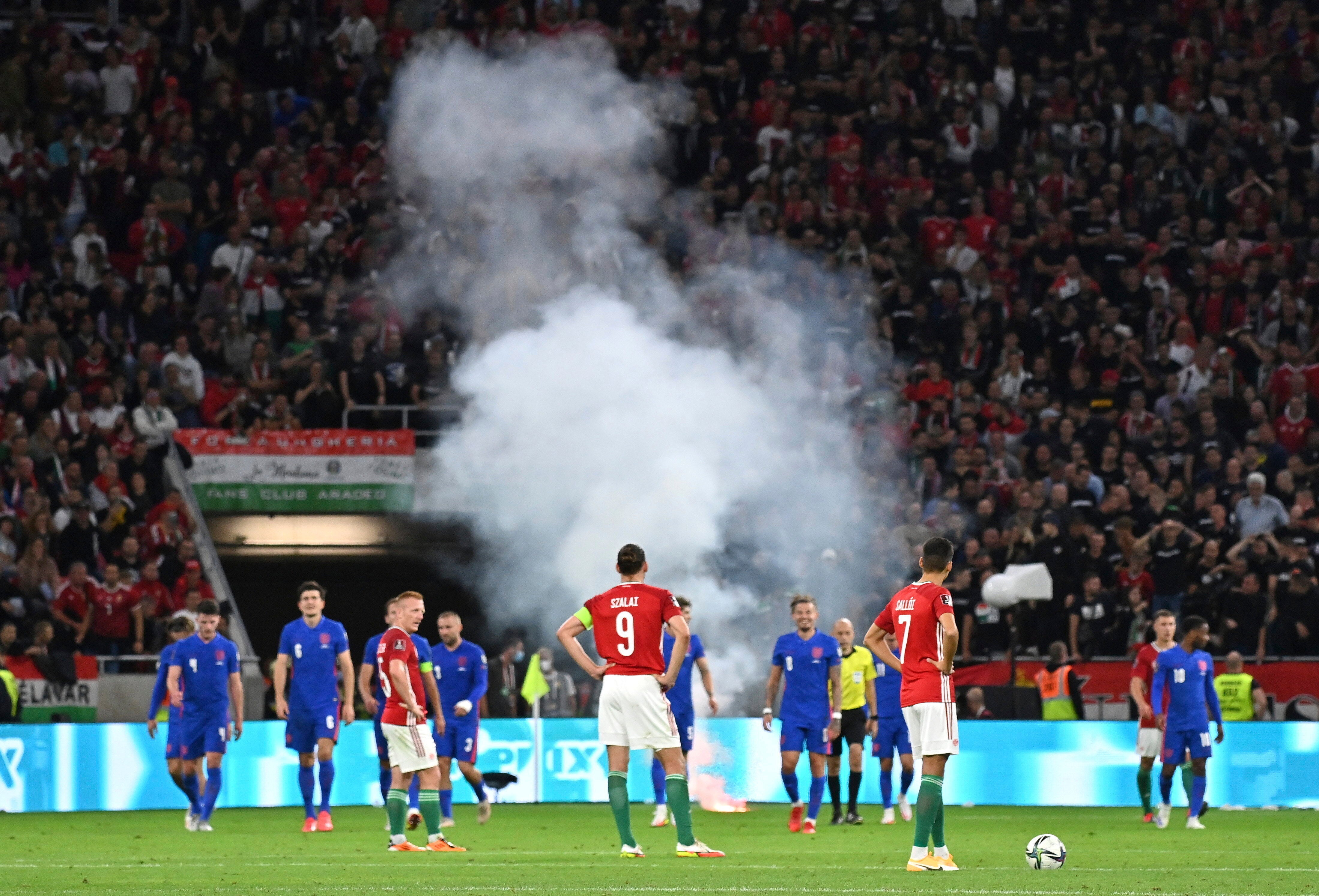 Southgate had refused to criticise Hungary supporters ahead of the game as three of his own players had been targeted at home, with Marcus Rashford, Jadon Sancho and Bukayo Saka receiving online racist abuse after missing penalties in the shoot-out loss to Italy.

He did call for the authorities to do more to protect players when asked if UEFA and FIFA needed to come together and make sure stadium bans were implemented across all competitions.

“I don’t think our players can do anything more than have done over the past two or three years and in trying to get right messages out, make the right stand,” he added.

“I have to say there’s a balance in the crowd, as we know at home, not everyone at home causes problems.

“Tonight our anthem was really respected remarkably well, so it is not fair to criticise all of the Hungarian fans, a lot were generous and behaved themselves extremely well.

“It’s a very similar situation to the one we find at home, I think. The individuals found responsible need to be dealt with. I think there’s evidence people were filmed and we have got to hope that the authorities deal with that in the right way.”

On the pitch, England dominated possession in a first half of few chances before bursting into life after the interval.

Sterling turned in a Mason Mount cross before revealing a message in tribute to a close friend who recently died.

Cups were hurled towards him and his team-mates as they celebrated in the corner, but the Manchester City man was not flustered, laying on a cross for Kane to head home the second just eight minutes later.

Maguire’s header then squirmed through Peter Gulacsi to make it three, with the Hungary goalkeeper also at fault as Rice scored the fourth late on.

“From the start the players were excellent,” added Southgate.

“They showed the humility I spoke about in approaching every day this week the right way.

“They know the standards they need to set. I was very pleased with the first half – even though we didn’t score we were in total control of the ball.

“We didn’t get the final pass or dribble quite right, but knew that in the end they would tire. They couldn’t keep chasing and defending – we made what was a very difficult fixture very comfortable in the end.”