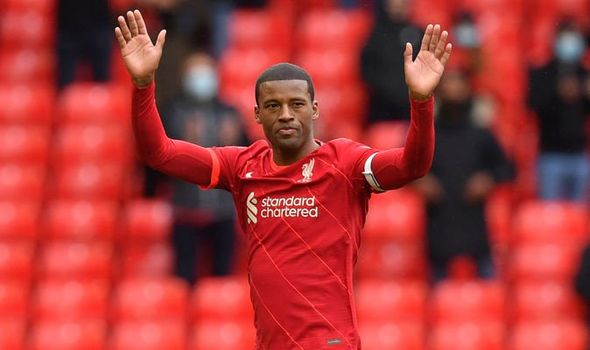 Liverpool’s Gini Wijnaldum has confirmed he will depart Anfield for a “new adventure” at the end of the season, but says he has not yet signed a contract to join Barcelona. Wijnaldum was emotional after his final Liverpool appearance and said of the club’s supporters: “I will miss them.”

The Dutchman was waved goodbye by 10,000 Liverpool supporters on Sunday in a 2-0 win over Crystal Palace that sealed a third-placed finish in the Premier League and Champions League qualification with it.

It has long been expected Wijnaldum would depart at the end of the campaign once his deal runs out after five years of excellent service.

But the Netherlands international, who joined from Newcastle for £25million in 2016, has been coy when talking about his future in public, insisting it is ultimately up to the club where he will end up.

Now, however, he has finally confirmed that he will move on for a “new adventure” after an emotional farewell against Palace.

Liverpool’s fans gave him a rousing standing ovation as he was substituted off late in the second half and chanted his name at full volume as Jurgen Klopp greeted him with a big hug on the touchline.

Wijnaldum, who wore the captain’s armband against Palace, was then afforded a guard of honour by Liverpool players and staff on the pitch after the full-time whistle. 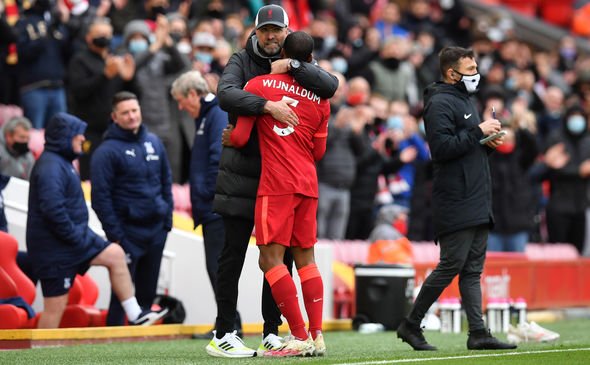 And speaking to Sky Sports, visibly emotional, Wijnaldum said: “I’m fighting against tears right now. The people in Liverpool have shown me love during the five years. I will miss them, you know?

“I hope to have played many more years for the club but unfortunately things went different. I have to start a new adventure.

“I knew I went to a big club. I remember that I was sitting in the living room and the manager said when I come to Liverpool we would win prizes.

“I am happy it went that will. It would have been really painful to leave the club without any.

“It’s really special. Since I’ve joined the fans have sung my name. Week-in, week-out they saw I was giving 100 per cent to give everything for this club.

“That’s what the supporters want to see and that’s what they appreciate from me. It is something I’m going to miss.” 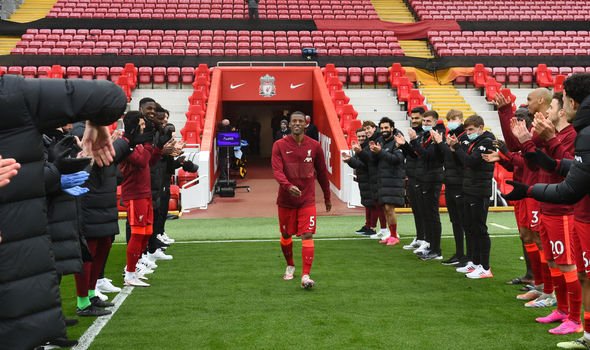 On securing Champions League football for next season with the win over Palace, Wijnaldum added: “It’s really important. Normally you want to leave on a high winning something.

“Unfortunately this season it was not possible but I’m happy I can leave the club behind in the Champions League.”

Wijnaldum is widely expected to join countryman Ronald Koeman at Barca, with Manchester City’s Sergio Aguero also set to link up with the Spanish heavyweights.

But the 30-year-old says he has not yet decided his next move amid links to German champions Bayern Munich.

He said: “I didn’t sign somewhere else. Everyone knows in football everything can happen. The situation is right now that on 1 July I am not a Liverpool player.

“We will see what I will do in the next couple of weeks. I will rest a little bit then go to the national team.

“I will have to look at my story and how everything went. The fans deserve to know the story behind it.” 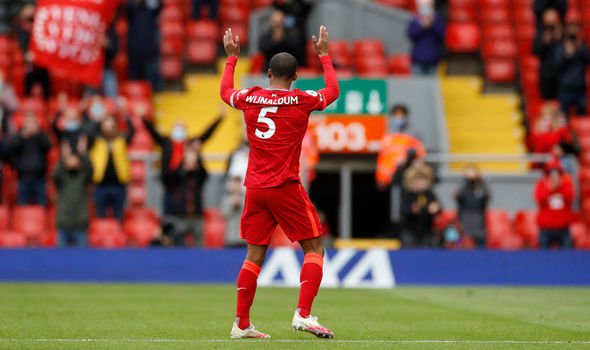 Wijnaldum will leave Liverpool after 237 appearances which have yielded 22 goals and 16 assists, including three goals in Champions League semi-finals.

He won the Champions League and the Premier League with the Reds and Klopp was bursting with praise for the player in his programme notes.

Klopp wrote: “This is hard to write because you never say never and at the time of writing this, he has not confirmed his intentions for next season. But I must recognise him just in case this is his Anfield farewell.

“Gini Wijnaldum. An LFC legend now and forever. What this person – this wonderful, joyful, selfless person – has done for our team and club I cannot sum up in words, in truth, because my English is not good enough.

“He is an architect of our success. We have built this Liverpool on his legs, lungs, brain and his huge, beautiful heart.

“If – and it is still if – he goes, he does so knowing we as his teammates are eternally grateful for having this special human being come into our lives. I love him and he will always be family.”