In front of goal, she calls herself a “risk-taker”, but when it comes to big life choices, Sam Kerr takes her time. Two years, in fact, is how long it took her to mull over joining Chelsea.

The Women’s Super League golden boot winner has revealed she came close to signing for the club a season before she eventually did, after being courted by manager Emma Hayes for two years.

Three consecutive WSL titles later, it is safe to say she feels she made the right decision in the end. 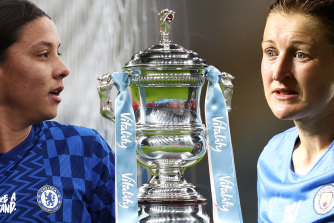 “Now that I’m here I can’t imagine playing for any other club in the league, or Europe for that matter. I suit playing for Chelsea. It’s definitely the best club I’ve ever been part of,” the 28-year-old declares.

“I spoke to Emma two years before I chose to come here and the year before I signed I was close, but then I chickened out. I feel like we did it in the right way when it was both right for us.

“I’m not someone that likes to beat around the bush. We just have this mutual respect. I’m just a straight-to-the-point person. That works for her because she can just tell me exactly what she wants from me. When you have such high respect, working towards the same goals, it just works.”

It would appear to be a match made in heaven so far, after the Australian star topped the WSL’s scoring charts for the second season in a row with 20 goals in 20 games. The last of those defied belief as she swivelled in the air to volley Chelsea 4-2 up over Manchester United last week with what, she says, is one of the best goals she has scored.

“I do that stuff in training all the time. Sometimes the girls get annoyed at me, and sometimes it looks good, but it’s just who I am. I’m a risk-taker. I just do what I feel, whether it’s right or wrong, and I’m very strong-willed, very stubborn,” adds Kerr, who became Australia’s all-time leading scorer this year.

“There was no doubt in my mind that I was just hitting that ball once it came off my chest. My whole life is lived on the edge, I either go big or go home.

“The commentator made it even better because the way she said ‘it’s so Sam Kerr’. I just laughed because I thought ‘that is so me’ because I don’t know if any other player would try that. The moment was sick. And just the importance of the goal that made it even better.”

Kerr is the Football Writers’ Association player of the year and many tip her to claim a clean sweep of all of this season’s individual honours. Part of her form is down to her feeling settled in London, but also the WSL is helping her improve.

“This league made me transform into a different type of player, a smarter player,” she says. “But if they’re double-marking me or man-marking me, then there’s someone else free. If I’m having a bad game normally someone else is having a worldie, so we share the load pretty well. We’re on a bit of a roll.”

Chelsea’s hot streak has seen them notch up 11 straight wins ahead of Sunday’s Women’s FA Cup final at Wembley, for which more than 50,000 tickets have been sold. But opponents Manchester City – who inflicted Chelsea’s most recent defeat, in March’s League Cup final – are themselves on an even longer 13-game winning run.

Kerr’s family have travelled across the world to see her play under the arch on Sunday. Both teams will be trying to lift the Cup for the fourth time, but Chelsea go into the final with their tails up after defending their league title.

“We were chasing this the whole year and then once we got ahead, no one was going to get it off us,” Kerr adds. “We went down to 10 players [against Tottenham] and I kid you not, in that changing room it was just calmness, no one was stressed. We all knew it was going to be fine.”

City will do everything they can to stop the holders celebrating again, but with Kerr on the field, expect flair, expect confidence, and expect goals.