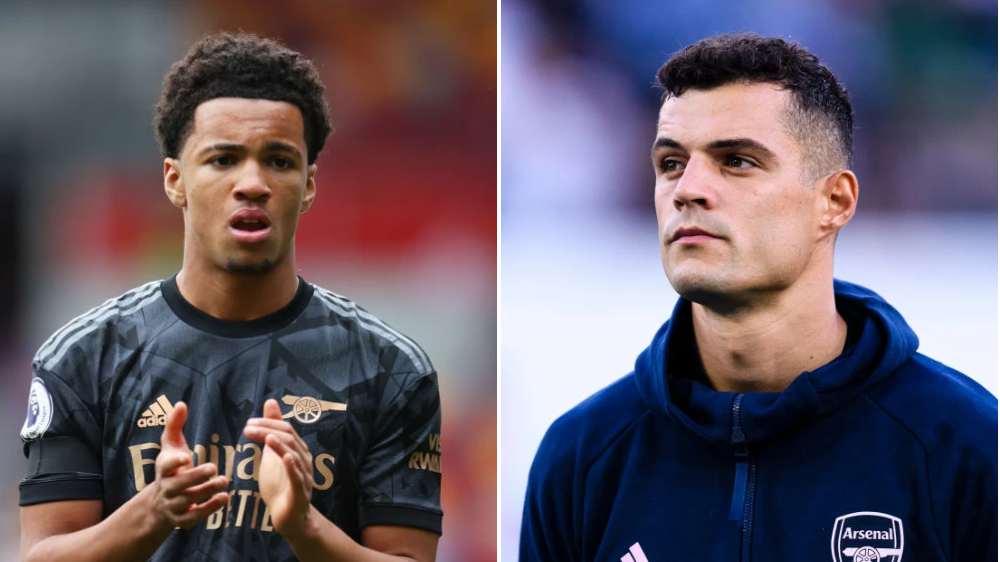 Granit Xhaka has heaped praise on Arsenal history-maker Ethan Nwaneri and says the ‘very special’ Gunners starlet has a ‘big, big future’ ahead of him.

Nwaneri, 15, became the youngest player in Premier League history when he featured in Arsenal’s 3-0 win over Brentford on Sunday.

The Arsenal academy star, who was born in March 2007, beat the record previously held by Liverpool’s Harvey Elliott.

Xhaka has joked he had mixed emotions about seeing a player almost 15 years younger than him play in the Premier League, with even the Brentford players taken aback by the youngster.

But Swiss midfielder Xhaka, who is enjoying a revival at Arsenal, insists ‘very special’ talent Nwaneri has the world at his feet.

Xhaka said: ‘We have to check the passport first! I am joking. To have a guy who is 15 and is nearly 15 years younger than me.

‘He looks old when I see him, but the club can be proud of a player like him. He has a big future. I am doing my coaching licence and I have trained the under-16s.

‘You can see a big difference with him and the other guys. He is very, very special.

‘You have to protect him as he is very young but if he keeps going like this with his hard work he has a big, big future.

‘It’s not only me that feels old. I spoke with one Brenford guy and I told him this guy was 15 and he looked at me and said: “f*** me, we are looking old!”

‘When you have 15 years difference you think “OK, the time is not gone but it is on the way”. But we are enjoying him, he is enjoying us as he has the quality.

‘He is not with us a lot in training. I have maybe seen him twice or three times now.

‘He is very shy, of course, but the time will come when he will be more with us but you have to protect him and help him.

‘Football is not everything for him and for us but yes, the club will help him and the experienced players have to help him.’

He said on BBC’s Match of the Day: ‘I’m so proud of that for Arsenal. To get in the team at that stage, some people might think it’s a stunt, but those people – Mikel, Per, Edu – are not putting him in there for a joke.

‘They’re not going to bring people in just for the sake of it. They think very highly of him, he was playing for the U18s when he was 14.

‘What I think this does is sent a massive message to the other academy players and shows them they all have a chance of playing in that first team.’

Gunners boss Mikel Arteta, meanwhile, said a ‘gut feeling’ led him to deciding to bring Nwaneri into the first-team squad.

‘It was a feeling that I had yesterday, I don’t know why,’ Arteta said after his Arsenal side clinched their sixth win from seven Premier League games this season.

‘It’s just one step and all the steps in your career are not forward and you have to know that. You can go forward then backwards and then forwards. You fall, you go back – that’s, unfortunately, this industry and the football career of any player.’