And while taking charge of a talented group brings opportunities, it also has its challenges.

The task facing new national team boss Tony Gustavsson is now quite simple: maximise the Matildas' undoubted abilities so that the end result is even better than the sum of its excellent parts, which hasn't always been the case. 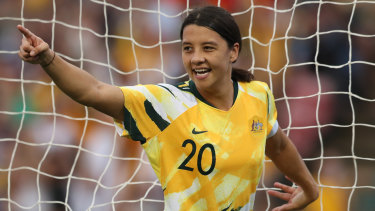 Gustavsson has plenty to work with: Sam Kerr, a star striker at English Women's SuperLeague club Chelsea, is one of the best known names in the women's game.

Ellie Carpenter is now plying her trade at European champions Lyon, and virtually all of the starting eleven are all now playing at a high level in the UK.

But just because there are plenty of top line players in the squad, that doesn't mean they are a top line team – as they proved, disappointingly, at the World Cup in France last year.

They travelled to Europe as one of the well-fancied teams with many a pundit naming them as dark horses to upset the applecart and, if not knock over the title favourites USA, at least make a run as far as the quarter or semi finals.

In the end they were a mis-firing unit, bowing out in the round of 16 on penalties to Norway, a team below them in the FIFA standings.

It was a tournament of missed chances and a disjointed experience where, aside from one brave fightback against Brazil when they clawed their way back to win 3-2, they failed to truly fire.

They saw off Chile in a two match series here last spring but made heavy weather of qualifying top of their group for the Olympics, when it took a last gasp Emily Van Egmond equaliser to snatch a crucial draw with China.

There will be little room for error if Gustavsson and his players are to satisfy what will, in all likelihood, be overwhelming and probably unwarranted national expectation over the next few years.

People who barely watch a round ball being kicked will be betting on the Matildas to win the World Cup in 2023 when it is hosted on home soil for the first time.

At the very least they will be banking on them to make the final. If past attitudes of what might be termed local ''expectation exceptionalism'' are anything to go by then even a last four appearance is likely to be deemed a failure.

So the onus will be on Gustavsson to find a way to best harness the unique attacking talents of Kerr, the closest thing the Australian men's or women's game has found to replicating Tim Cahill since his departure.

But he also needs to get his midfield mix right, with a plethora of experienced players vying for a handful of sports.

He is well covered in the full back areas, with Catley on the left and the exciting Carpenter on the right an excellent pairing.

But he will need to make some tough decisions in central defence, where the stocks are not as deep.

He has an excellent reputation as a tactician and strategist, and if he can get the Matildas singing from his songsheet, then they could well be in perfect pitch. Australian sports fans, not just soccer supporters, will be tuning in on a regular basis.