Guardiola: Haaland cannot win Champions League for Man City on his own

Manchester City superstar Erling Haaland twisted the knife into his former team-mates after scoring an acrobatic winner against Borussia Dortmund on Wednesday night. The Norwegian rose high into the air and contorted his body to seal three points for Pep Guardiola’s side and make it two wins from two in the Champions League this term.

Haaland left Dortmund for City this summer in a bumper £51million deal, calling time on a prolific spell in the Bundesliga. His life in the Premier League has continued much the same, bagging a scarcely-believable 10 goals in six matches as well as three in Europe.

Two came against Sevilla last week but he was called upon on Wednesday night too as City left it late to pip BVB. Jude Bellingham’s headed opener was cancelled out by a long-range John Stones strike with 10 minutes to play, while Haaland popped up just four minutes later to convert Joao Cancelo’s sumptuous cross with an unlikely Kung Fu kick.

After the final whistle, Haaland admitted that it was nice to see his former colleagues but pulled no punches when told that they had done a good job keeping him quiet in the game’s opening stages. 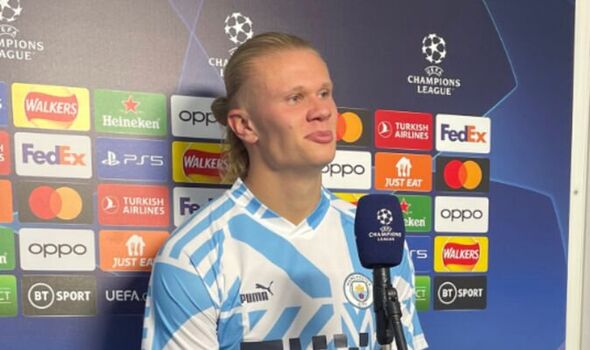 “In the end we showed what we are and this is what we are,” he told BT Sport. “This is how we have to play. In the end I’m proud of the last 30, 35 minutes. Two wonderful goals today, mine was a bit better [than Stones’] honestly, so yeah. Cancelo played a nice cross, [it was a] very important win. [It was] good to see everyone [from Dortmund].

Haaland was then told that Dortmund initially did an admirable job containing him, to which he responded: “They didn’t stop me when I scored. They played well. I was quite sure I was going to be followed the whole game. Dortmund were good today but in the end, the three points is what matters.”

Haaland, still just 22, was a phenomenon during his two-and-a-half year spell with Dortmund, scoring 86 goals in 89 games and becoming far more valuable than the £51m release clause City ended up paying this summer. Just over a month since his Premier League debut, the Norwegian has already bagged 13 goals in all competitions for his new club as rivals are left to wonder how to keep him under wraps.

Despite Wednesday night’s grandstand finish, Guardiola was seemingly unhappy with how poorly his side performed for the majority of the game. After the final whistle he supposedly blocked his players from conducting interviews and dragged them to the dressing room instead for a stern post-match talk. Having re-emerged, Stones explained how City picked themselves up at the interval and provided extra detail on his own powerful strike. 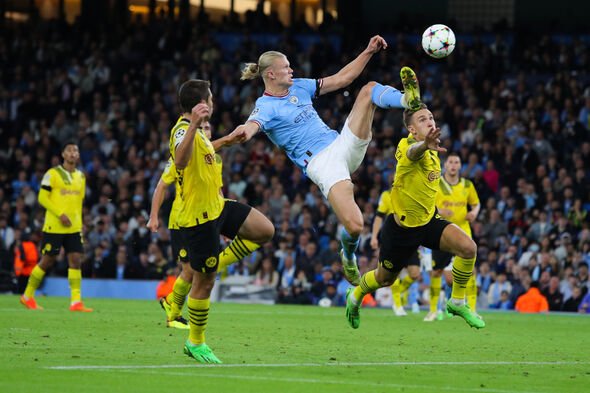 “We try and take up those positions [on the edge of the box],” he told BT Sport. “The manager wants us in those sorts of areas to control the counter-attack. We’re in good positions for balls that come outside the box.

“I was getting a few shouts [when the ball fell to me] and I just decided to pull the trigger. We weren’t at our best tonight. First half, we made it difficult and didn’t play at the tempo we should have. At half time we had some stern words between each other and tried to change that for the second half, which we did.”