Geordie on the Florida shore: How former Newcastle star Ray ‘Rocky’ Hudson became the voice of football in the United States

Take a tour of Barcelona’s Nou Camp and, during a video montage of classic goals relayed inside the stadium’s press box, a Geordie voice booms back at you.

It belongs to Ray ‘Rocky’ Hudson, one of the most recognisable sounds on US television, a star of commercials, video games and a beIN Sports commentator so decorative in his description of Lionel Messi that his words have been immortalised by the Spanish giants.

‘If Messi was captain of the Titanic he would have nutmegged that iceberg,’ is one such offering, delivered in the broadest Tyneside twang. Hudson was a young player at Newcastle United in the mid-Seventies, a maverick midfielder who found All-Star fame amid the glamour of the North American Soccer League, playing alongside George Best with Fort Lauderdale Strikers. 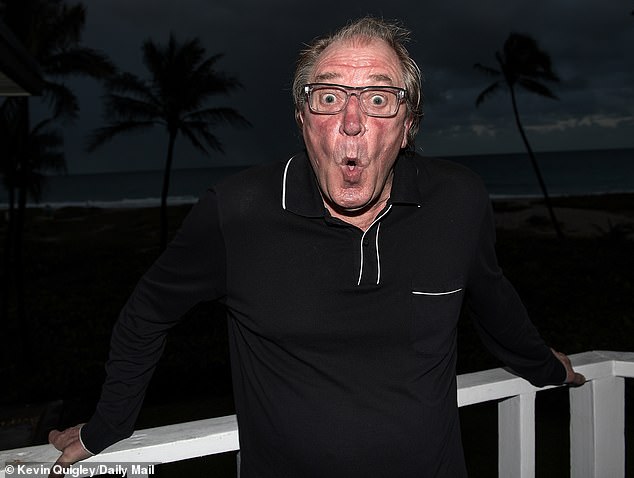 And, shortly before coronavirus caused the world to enter lockdown, that was where we found him, enjoying a beer beneath the sunset in Lauderdale-by-the-sea.

‘MOVE on in guys, there’s a storm coming,’ says the waitress on the terrace overlooking the Atlantic Ocean. On reflection, her words were somewhat prophetic.

No such luck, but it does tee up the story of how a working-class 21-year-old from Gateshead washed up on these golden shores in 1977… and has ridden a wave of wonder ever since.

‘A scout approached me after a reserve match at Preston, I don’t know what he saw, it was a bloody horrible game, and said I’d be perfect for this league in America,’ begins Hudson. 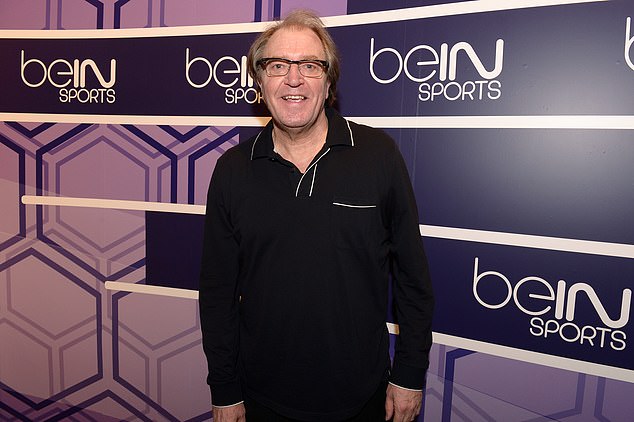 ‘Well, they first brought me over during spring break, didn’t they? I was a single lad, there are girls everywhere and I didn’t have to buy a drink, I thought it was like that every week!’ For a little while it was, especially when Best arrived the following year.

The adventure that was to unfold would help shape Hudson’s instinctive, elaborate and off-the-wall prose.

It is why David Beckham’s Inter Miami have asked him to be their new ‘colour commentator’.

‘I was asked to call one MLS game about 20 years ago and they’d never heard anything like it. I had a different way, emotional, hyperbolic, off the cuff,’ he says.

‘They’ve never tried to refine me or neutralise the accent either.

‘Some of the great players, such as Messi, deserve to be framed in that way. There is no time to contemplate, you have to say what you feel in the moment.’

It was one such impulsive, on-air comment that forced Hudson into management in 2000. ‘I was Miami Fusion’s in-house commentator and said, “I can’t put lipstick on this pig any more”. 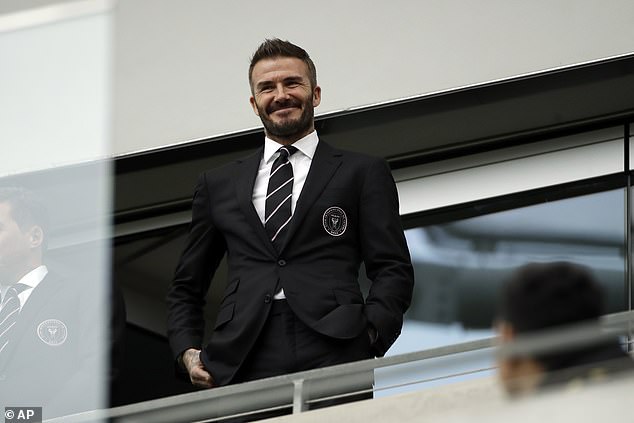 Hudson led Miami to the US Open Cup final before the franchise folded and he took charge of D.C. United. After two years in the capital his time was up and, in one of his final press conferences, he told reporters: ‘Someone get me a blindfold and a cigarette.’

Scroll through the YouTube compilations, social-media fan pages and countless articles dedicated to his work and you begin to grasp the appreciation.

‘I cried when I heard my voice in the Barcelona museum, and they’ve got that on camera too,’ says Hudson, now 65. ‘I had a good playing career here and made the All-Star squad five times, but I’m better known as a commentator, that’s for sure.

‘I was at a drive-thru once and this lady said, “Is that you, Ray? I’d know that voice anywhere”.’

It is often forgotten, however, that Hudson’s feet did the talking for him during a 14-year playing career in the States. 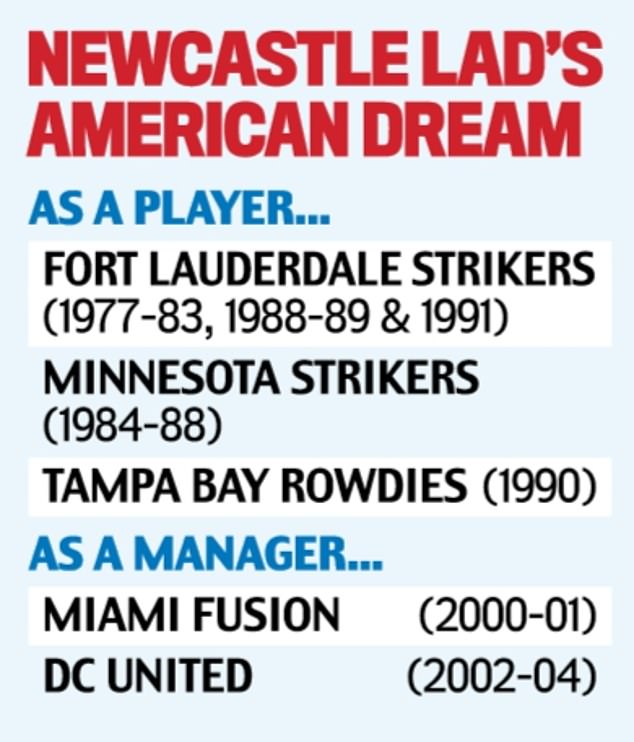 ‘Not bad company to keep that, is it?’ says Hudson. And then there was Best. ‘My favourite memory with Georgie was beating New York Cosmos 5-2. He got the ball in our half and went by five of their team. He’s running down the wing and I’m free in the middle, screaming at him, but he’s got his head down beating all these players.

‘He didn’t have to look though, did he? He plays this blind pass straight into my path. I’m thinking, “F***ing hell, this fella is a different level”.’ And what about Muller?

‘A strange player. You couldn’t put it ahead of him or behind him. But if you hit him dead-on with a pass, he would just kill it and score. Simple, eh? He was a fire hydrant type of a player. He had the geometry of the box down to a tee… brilliant.’

The one thing world stars such as Best and Muller enjoyed, says Hudson, was the relative anonymity of coastal Florida.

‘I was good pals with Georgie. He had this Jeep and one day after training we got in.

‘He took the top down and the doors off! I asked, “What are you doing?”. He laughed, “I love this, Ray. I drive wherever I want and no one is chasing after me, no f***er knows who I am!”.’ The storm the waitress had warned us about is now bending the palm trees on the beach outside and battering the windows.

‘Makes me nostalgic for the North East,’ says Hudson. Does he regret not going home? ‘I do look back and think, “I wish I’d played for Newcastle again”. And there was a chance, you know. 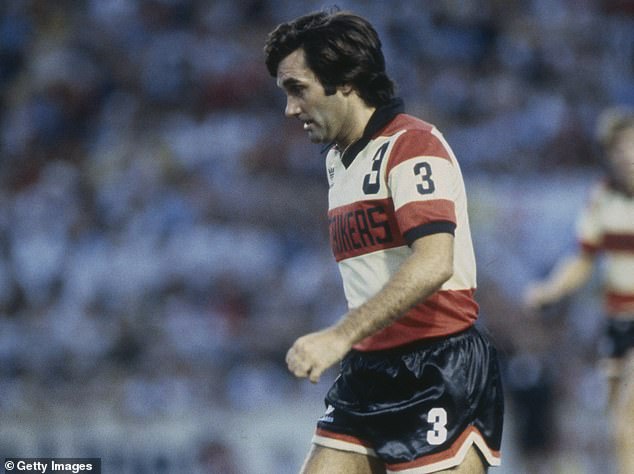 ‘Bobby Robson came here with Ipswich in 1982 and waited after to speak to me, he held up the team coach in fact! He was taking over as England boss, but said he could sort a move to Ipswich. I told him I’d only come back for Newcastle.

‘Not long after Newcastle called saying Bobby had been gushing about me to them. I thought, “This is it!”

‘They approached Fort Lauderdale but they wanted too much money. It never happened, I was so disappointed.’

Later in the evening, Hudson sends me a text message.

Here is some of it: ‘For all the talking I do on TV and radio, there is nothing like what I enjoyed tonight.

‘It wasn’t just a walk down memory lane, but a reconnect with home. Hopefully see you when I get back to Newcastle. P.S. Sorry about the weather!’

For now, a pint in the Toon will have to wait.