Harper was 24 when he joined Corica at a formidable Marconi side in 1991. The club was affectionately known as "The Palace" back then, housing stars such as Mark Schwarzer and Gary van Egmond that made a young Harper more than a bit star-struck. 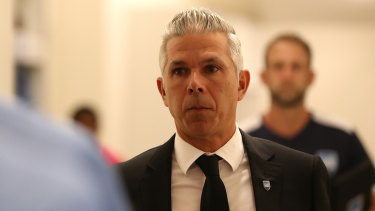 "For someone like me to have been recruited to a club like that, my head was spinning," Harper said.

But it wasn't until he was put through drills with an 18-year-old Corica that he realised the palace's hidden gem.

"I couldn’t believe my environment," he said. "Then you get a kid like Steve Corica and think 'my god, what a player'. He was so amazingly light on his feet with incredible balance. I had never seen anything like it before." 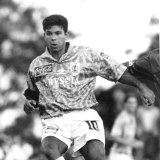 Rising star: Steve Corica playing for Marconi during their successful season in 1993.Credit:SMH

Like the rest of Australian football, Harper knew little of the skinny teenager from North Queensland. His first impression was of a kid "with a Muttley snicker" and "a metro-sexual well before David Beckham hit the scene." Not long after, he learnt Corica was perhaps the most iron-willed competitor he'd met.

"You don't survive unless you can access that reservoir of competitiveness," Harper said.

It's a trait that often goes by unnoticed due to his quiet nature but one he says stems from his upbringing. The grandson of Italian migrants to Innisfail, lessons of labour were immediately instilled by his family.

"My grandfather came there to do the sugar cane then my dad worked on the sugar cane," Corica said. "He did that for half a year then he was a professional fisherman for the other half."

His parents taught him hard work, his two older brothers made him competitive with backyard games. "I was the youngest of three and I didn't like losing," he said. 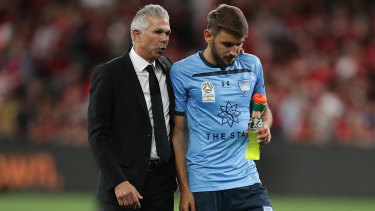 “Someone you want to play for”: Steve Corica is on the cusp of a fifth title at Sydney FC. Credit:Getty

It instilled Corica with a hard-working mentality, whether it was when making a mockery of the four-team junior competition in Innisfail, or with Leicester City, Wolverhampton or the Socceroos.

"The one thing people don’t realise about Steve is how truly competitive he is," his former Wolves teammate Kevin Muscat said in 2018. "I know it's public how competitive I am, but I haven’t come across too many that are as competitive as Steve."

Unfortunately for Corica, that trait was best displayed in 1997, at a time when nobody was watching.

"In my first year at Wolves I did my knee, ruptured my cruciate and needed a reconstruction," he said. "Then in my first game back, I did it again. I ruptured the cruciate in the same knee."

A two-year layoff and twin reconstructions could be enough to end a player's career but Corica never lost hope of returning to the field. It took time to regain form, "about three years" he says but he worked his way back into the Australian national team and managed to keep playing until 2010, retiring at 37.

As former Sydney FC captain Alex Brosque says, that "never give up" attitude made Corica a great leader. The other factor was his composure. Whether as a player or a coach, Corica has been as calm as he is driven, creating confidence in those around him.

"When things aren't going well, you see people's true colours but Bimbi [Corica] doesn't change," Brosque said. "His calmness filters through to everyone around him. That makes him someone you want to play with and you want to play under."

Graham Arnold saw as much in his assistant of four years. When he was appointed Socceroos coach in 2018, he lobbied the Sydney FC board to ignore high profile applicants and look to promote Corica. "He was only one person for me. They didn’t need to look overseas, they had that person inside their house," Arnold said. 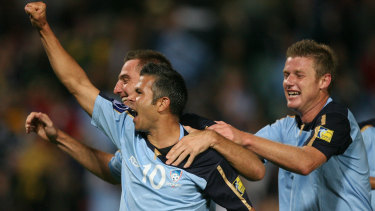 Star to coach: Steve Corica has been with Sydney FC since the club’s inception. Credit:Steve Christo

The result over the last two seasons is a Sydney team that has never been so moulded by a coach's manner, according to Brosque.

"It's the calmness in the way they play," Brosque said. "They don’t rely heavily on the pressing game, they are confident enough with their own ability with the football that they can win games like that."

That much is clear to Harper. The character of Sunday's finalists bears an uncanny resemblance to his old teammate.

"The way the team is playing, it’s just him," Harper said. "Corica was a hybrid of a [Milos] Ninkovic and [Adam] Le Fondre… which was just amazing to watch."

His Sydney FC team are on the cusp of a fifth title – an achievement no other club has reached in the 43-years of Australian national football. Corica scored the winner in Sydney's first title 15 years ago. If he guides them to a fifth on Sunday, he'll shape more than just their A-League squad.